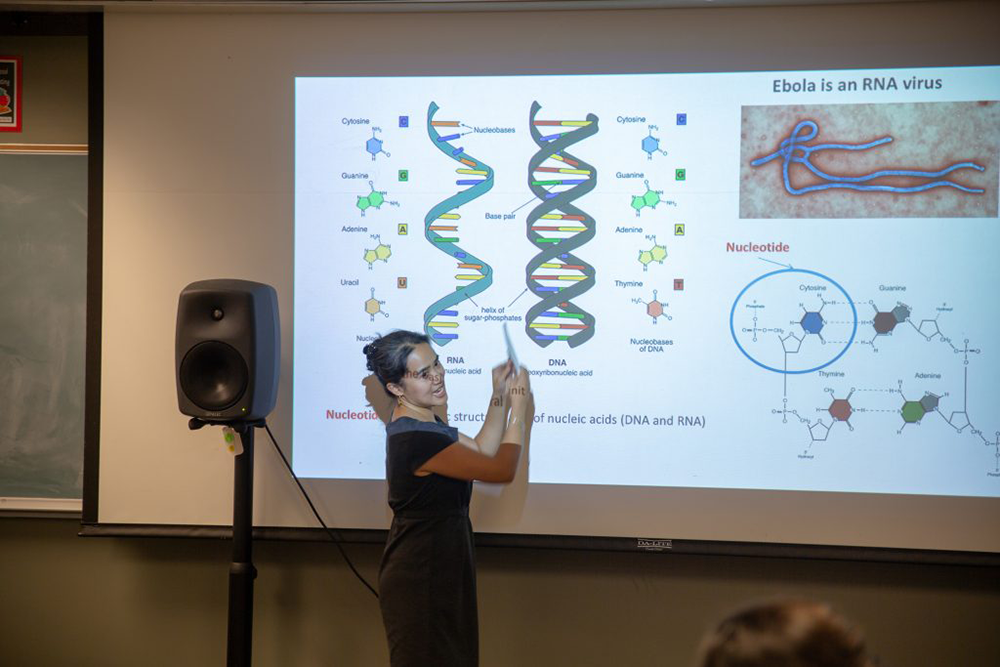 This fall marks the first semester of the new core science requirement for students in the School of Foreign Service.

The Class of 2022 is the first group of students subject to the new core curriculum. Accommodating the addition of a science requirement required a reduction in economics courses, major courses and the three—or more—credit courses needed to graduate.

The SFS science classes aim to explore the intersection between science and international affairs through courses including “The Science of Extinction and De-Extinction” and “Examining Crises Through the Lens of Science,” according to Mark Giordano, Science, Technology and International Affairs program director.

“We wanted to make a set of science classes that were directly oriented toward SFS students,” Giordano said in an interview with The Hoya.

For Christina Luke (SFS ’22), “The Science of Extinction and De-Extinction” was not a class she initially thought she would be interested in. After being in the class for seven weeks, Luke’s perception on science courses has shifted.

“It’s interesting subject matter that I usually would not have picked for myself and now being in the class it actually makes me want to take more SFS science classes and further delve into how science engages with the international community and international studies,” Luke said in an interview with The Hoya.

The course’s varied methods of learning, ranging from using 3D-printers to create prints of dolphin skulls to understanding how to create science-related policy briefs, is what has made the class interesting, according to Luke.

“With the Grand Staircase-Escalante National Monument in Utah there were so many cretaceous fossils and there was an effort to preserve the national monument because Trump wanted to open it up to privatization,” she said.  “We had to write a policy brief as if that had not already happened and it was a way to connect what we were learning to present day events.”

Danny Livingston (SFS ’22) said the connections between science and international relations in his “Examining Crises Through the Lens of Science” class is discussed using different case studies, focusing on topics like biological weapons and infectious diseases.

“It has a lot to do with international events and how different countries are responding and working together to solve these crises,” Livingston said.

Although the courses are meant to spotlight the presence of science in the international community, more emphasis could be put on the science aspect of the course, according to Livingston.

“We had one day in a lab, it would be cool if we had more actual science, more hands-on stuff,” Livingston said. “I’m a STIA major so I’ll have more experiences in the future, but I know for other students who are IPOL or IPEC majors that this could be their only exposure to science.”

Going forward, the School of Foreign Service Academic Council hopes that the SFS science classes continue to be taught by professors who are knowledgeable and passionate about their subject area to make the class interesting for all students, including those who may not wish to pursue a field relating to science, according to SFSAC Vice President Forrest Gertin (SFS ’20).

“This is something that the SFS Academic Council has been pushing for, is that any class that we are requiring you to take—even though, say you’re an IPEC major, so you’re not particularly interested in science—we want the class to be taught by someone who really knows how to teach and is one of the best teaching professors at the university,” Gertin said. “We’ve found some success in lobbying the Dean’s office so that the people who are teaching those courses are, and will continue to be in the future, the best teachers that we have at the university.”

Although the SFS science classes currently have a biology focus, as the program expands, more classes integrating aspects of chemistry, such as a class focusing on weapons of mass destruction or global health, will hopefully be added, according to Giordano.

“It’s not that science and technology issues weren’t always part of international relations, but I think that it is blatantly obvious right now its importance and not having something looked like a big gap,” Giordano said.