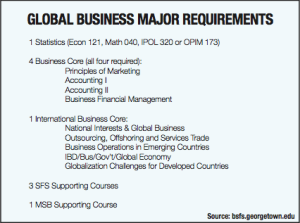 The McDonough School of Business and the School of Foreign Service have launched a pilot version of the Global Business Fellows program and a global business major, which both begin this semester.
The programs were announced Dec. 3 in an email sent to all SFS and MSB sophomores.

The joint venture between the two schools includes the recently announced global business major offered to only SFS students. The second component of the partnership, the fellows program, is open to members of the Class of 2017 in both the MSB and the SFS, and will provide participants with a certificate in Global Business.

The joint application for both the fellowship and the major was released Jan. 5. After writing a 250-word interest essay and providing academic records in an application due last Friday, applicants were notified of their acceptances Jan. 9 midway into the class add/drop period that ends Jan. 17. While the pilot fellowship program admitted 12 students from each of the two schools, the program is expected to admit 15 from each school beginning next year. The SFS Dean’s office did not indicate how many students were accepted to the major program, but some students were accepted to both the major and the fellowship.

Both the program and the major were designed to combine political and economic coursework from the SFS with a foundation in business education from the MSB.

The major program requires 10 courses, which include statistics classes, a business core, an international business core and supporting courses from both the SFS and MSB. Once accepted, students received one of four major advisers to help them select courses.

The fellowship, which requires a GPA of at least a 3.3 and six semesters of a language, includes an economics core, an international business core and an additional capstone Global Residency Course. Students in the fellowship are also provided with a fellowship adviser through the Landegger Program in International Business Diplomacy.

MSB professor Ricardo Ernst, who helped to develop the fellows program, noted that the program marks the first collaborative effort between the two schools.

“For the first time in the history of Georgetown, you’re bridging and getting two schools to join forces to come up with a common program,” Ernst said. “The [fellows] are going to be trained to deal with problems that are common in global business.”

According to Ernst, the fellows program will offer its participants access to courses in both schools, so as to promote interdisciplinary learning.

Ernst said that the combination of courses from the two schools would benefit the fellows.

“I am a deep believer that the mindset of an SFS student is different than the mindset of a MSB student,” Ernst said. “So there’s a lot to be learned when you put that subset of the SFS in a class in the MSB. There’s a lot of learning by combining that kind of experience.”

Sophia Yang (SFS ’17) was accepted into both the major and the fellowship and said that she is excited to fuse her interests under one program.

“I’m really just excited because I’d always wanted to get some more hard skills for my future just in general because I feel like what my goal in life is to figure out where and how to invest money to enact the most positive and impactful social change,” Yang said. “So I think to even start to be able to understand that to enact positive social change, I have to be able to understand how money works and how businesses work.”

Despite her excitement, Yang said that the late acceptance notification, which fell midway into the add-drop period, made class selections difficult and stressful.

“[Before I was notified], I wouldn’t have known if I would have been able to take certain classes I had been going to,” Yang said. “For example, Accounting 101 — I wasn’t even sure if I would get the major, but at the info session they told us they only were selecting 15 students.”

Chris Hedley (SFS ’17) was accepted into the global business major, and said that it provided an excellent synthesis of his interests.

“I was deciding between the MSB and the SFS for which to apply to, and I ultimately chose the SFS because I thought that the curriculum was broader, and I figured that I had the rest of my life to study business, so why not study the international community while I could,” Hedley said. “I always wanted to take these classes my friends in the MSB were taking — accounting courses, finance courses — and when I realized that there was a way to do that through the global business major, which I found out about like a month ago, I was incredibly excited.”

In addition to the academic requirements, the program will also offer opportunities for professional development to its fellows.

“We are planning to have visits to multilateral organizations as a group — World Bank, IMF, embassies, Congress,” Ernst said. “We will work directly with companies and sell them as the fellows. … Hopefully companies and the rest of the world will start recognizing what’s going on there.”

However, SFS professor Ted Moran, who helped to develop the program, said that fellows will be prepared for careers outside of the private sector.

“A lot of our graduates, even now, don’t necessarily go into business. They may go into NGOs, like Transparency International, or various kinds of development organizations,” Moran said. “It’s not just a narrow business path. There’s a broader context in terms of the social, political, economic in which business takes place.”

MSB Senior Associate Dean Norean Sharpe said that while the development stage of the program began two years ago, there had been much talk to create a joint program between the schools for many years.

“The development of this program has taken years of effort on the parts of multiple faculty and administrators at both McDonough and the SFS. It is a groundbreaking and ambitious project,” Sharpe wrote in an email to The Hoya.

According to Moran, the program has received funding of approximately $10 million, from private donors. They plan to continue to raise funds from donations over the course of the year.

“We are hoping and planning that this is going to make a big contribution to Georgetown. It’s going to be a vehicle for us to raise funding,” Moran said. “Ten million dollars is the minimum. We’re actually shooting closer to $20 million. The whole campus will benefit.”

Era Qian (MSB ’17), who was accepted into the fellows program, said that she was attracted to the program’s emphasis on integrating international affairs with business.

“I think business and international affairs can be complementary,” Qian said. “Many students like me might have found difficulty in deciding which direction to go. Now, this integrated curriculum provides us a great opportunity to embrace both disciplines and thrive in them.”