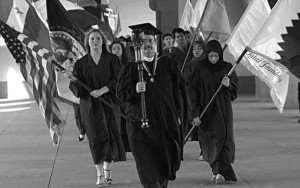 Image Contributor
Graduates of the first SFS-Q graduating class enter the Museum of Islamic Art in Doha in May.

IN AUGUST 2006, Fr. Ryan Maher, S.J. – then assistant dean for academic affairs at Georgetown’s School of Foreign Service in Qatar – told students about the moment he learned of the Sept. 11 attacks. He said he had passed students on the campus speaking to each other in Arabic that day, and he had felt a momentary flare of anger at the Muslim world.

“We acknowledge those dark corners and ask, `What are we going to do about it?'” he said in 2006. “Georgetown’s answer is `education.'”

In the months before and years after Maher’s comments, Georgetown has worked to develop and expand that answer into the SFS campus in Doha, Qatar, as it exists today. In August 2005, after more than 200 years of educating students at its D.C. campus, the university welcomed 25 students to a new campus 8,000 miles away.

“Our intention is that it would strengthen the presence of America in the Middle East in a way that it would improve understanding and relations between the two sides,” James Reardon-Anderson, then the SFS-Q project director, told The Hoya in February 2004. Reardon-Anderson would become the first dean of SFS-Q.

The school originated when the Qatari government spoke with SFS alumnus and former U.S. ambassador to Qatar Patrick Theros (SFS ’63) about the possibility of adding another American university satellite campus to Education City. Set up by the Qatar Foundation for Education, Science and Community Development, the 2,500-acre education center near Doha is home to several branch campuses of American universities, including Northwestern University and Carnegie Mellon University. Theros suggested his alma mater, and the Qatar Foundation proposed the project in 2002.

With its inaugural class hailing from 11 countries and spanning a 10-year age range, SFS-Q quickly evolved into a tangible expression of Georgetown’s work toward forming a global perspective for itself institutionally and for its students.

“[SFS-Q] is something to boast about because very few universities have the opportunity to broaden their horizons and reach out to a wider range of students,” Assma Al-Adawi, then a sophomore in SFS-Q, said in a viewpoint in The Hoya in January 2007. “It is a rare opportunity to have one university with two very different cultures.”

With the introduction of new technology, those cultures became closer. The two branches of the university created a Global Classroom, which incorporated audiovisual technology to allow students from both campuses to participate in a single class and travel to meet each other during spring break.

“The role Georgetown is playing here [with the SFS-Q] is the beginning of what should be a larger effort in international relations, one that works to debunk the myths and stereotypes created by dehumanizing slander,” Matthew Smallcomb (COL ’09) and Zack Bluestone (SFS ’09) said in a viewpoint in The Hoya in March 2008. Smallcomb and Bluestone traveled to SFS-Q with professor David Edelstein’s Causes of War class in the spring of 2008.

What began as a branch campus with only 25 students and seven full-time teaching faculty members has evolved over the last several years into a school with all the marks of a small university. Students in Qatar play cricket, basketball and soccer. They have GUGS grill-outs, picnics and potlucks. They discuss politics in coffee shops, watch movies and television in lounges, and relax on the beaches and in the desert when weather permits.

As far away as SFS-Q may be, its students are students much like those in D.C.

“Where SFS-Q helped us most was to realize just how similar we all are. And when this idea spreads through our respective societies, maybe the conversations will change, maybe the hatred will ease, and maybe the violence will finally be abated,” Smallcomb and Bluestone wrote.

With the graduation of its inaugural class last May, SFS-Q has come of age while remaining committed to combating intercultural misunderstanding. The first SFS-Q students have moved on with their lives; Dean Reardon-Anderson has returned to the Hilltop, and a new interim dean, Mehran Kamrava, has taken his place. The once single-classroom school is now awaiting the completion of a new facility, and the school is set to continue its role as an institution for Hoyas on the other side of the globe.

What Reardon-Anderson told The Hoya at the announcement of the opening of SFS-Q remains true today: “The Blue and Gray are flying proudly in the Arabian Gulf.” “