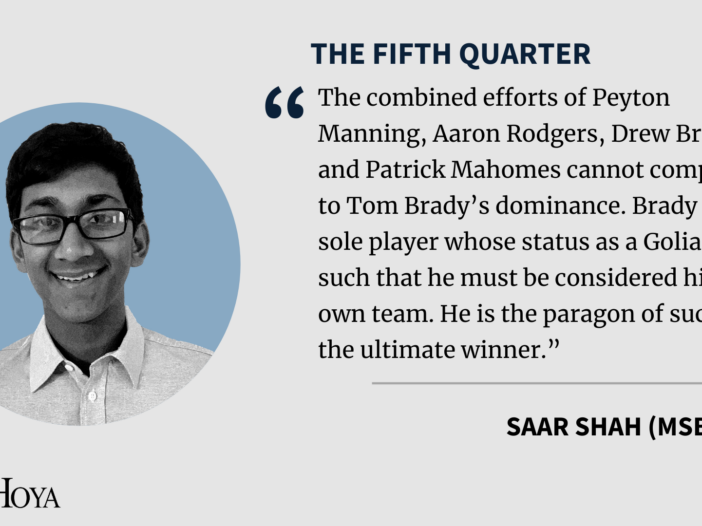 We all saw it; in one of the most highly-anticipated Super Bowls ever, the Tampa Bay Buccaneers routed Kansas City. Tom Brady put together one of his most efficient Super Bowl performances en route to a seventh championship win. After the game, Brady held up the Lombardi Trophy and asked, “How about that?” How about that, indeed.

When Brady claimed his first title in 2002, I was not born yet. I am now midway through my second semester in college, and his reign over the NFL has no end in sight. An entire generation has grown up recognizing Brady as one of the best quarterbacks in the league. It is time we all recognize him under a different title, one that he earned long ago but cemented Feb. 7: the undisputed greatest of all time.

Practically any argument emphasizes his case as the greatest ever. We could look towards his sheer longevity; while Brady continues his quest for championships, Peyton Manning is five years removed from throwing a football, Drew Brees seems to be announcing his retirement and Aaron Rodgers was left sitting at home this year after meeting Brady in the NFC Championship Game. Although all these quarterbacks have certain unique elements to their games, Brady is different. He has become the master of all — his technical prowess and intangibles add up to become far greater than Patrick Mahomes’ arm, Manning’s IQ, Brees’ efficiency or Rodgers’ improvisation. Brady has separated himself from the pack, and now he stands alone.

Perhaps his performances themselves have earned him this title. Brady established himself with a 53-yard game-winning drive in a classic Super Bowl upset over the then St. Louis Rams for his first ring in 2002. This move has now become his patented signature; nearly every fanbase has been reluctant witnesses to an iconic Brady series.

Over a decade later, Brady won what many consider the greatest Super Bowl of all time, scoring two touchdowns in the fourth quarter to defeat a legendary Seattle Seahawks defense. These wins were not enough, however; he then came back from a 28-3 deficit against the Atlanta Falcons for his fifth championship, leading one of the best comebacks of all time. Brady is clutch, infallible and unyielding.

The most compelling case, however, comes when we try to quantify the GOAT debate. Brady has more rings than every other team, more Super Bowl appearances than every team but New England, and more postseason victories than 29 teams. The combined efforts of Manning, Rodgers, Brees and Mahomes cannot compare to Brady’s dominance. Brady is the sole player whose status as a Goliath is such that he must be considered his own team. He is the paragon of success, the ultimate winner.

Despite this evidence, a shrinking group of critics remains as vocal as ever. These critics’ claims, however, have become typical, tired and unfounded.

“Manning had a ring with two different franchises.” Brady just ran the gauntlet in Tampa Bay. “Mahomes is the most talented quarterback in league history.” Brady went 2-0 against him in the playoffs. “Brady is a byproduct of Bill Belichick’s genius.” Brady won in Tampa Bay while New England floundered this season.

Brady is impervious to these counterarguments, proving himself the definition of a true competitor and the embodiment of rising to any challenge.

Though his success invites hate, his personality and extracurriculars are the sources of even more controversy. His journey has been as polarizing as it has been entertaining, chock-full of scandals and controversial moments. He responded to the Deflategate suspension by leading New England to an 11-1 regular-season record and fifth Super Bowl win. He ignored talks of an impending cliff, sticking to his controversial TB12 method and becoming more successful in his 40s.

He was the cocky upstart who allegedly told long-time New England franchise owner Robert Kraft, “I’m the best decision this organization has ever made.” He jawed with Tyrann Mathieu in the Super Bowl and subsequently targeted him on a touchdown and posted videos of himself smirking after playoff wins. While showing his talent on the field, Brady has also evolved to become a confident machine, carrying a certain swagger that further highlights his greatness.

By any metric, Brady has ended the GOAT debate in the NFL. He has become the mythical, the unconquerable and the impossible, with stories so unfathomable they seem more like the stuff of legend. After winning his seventh Super Bowl ring, his legacy as the greatest NFL player of all time is unquestionable.

Saar Shah is a first-year in the McDonough School of Business. The Fifth Quarter appears online every other week.