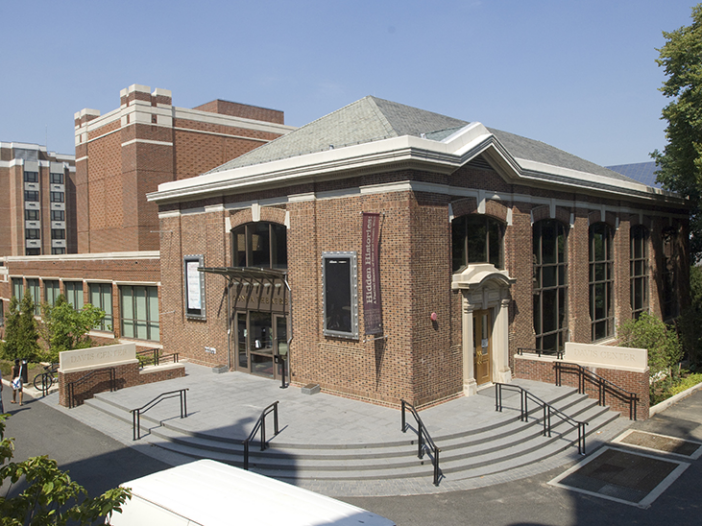 For a year and a half of concert choir rehearsal, Zoe Corrigan (MSB ’23) saw her fellow choir singers on Zoom — but she could not hear them sing. The limitations of Zoom meant the singers had to turn their microphones off, leaving them essentially singing on their own.

That solitary singing experience made Corrigan’s first in-person concert choir rehearsal all the more meaningful because she could finally hear everyone singing with her, she said.

“It’s such a together activity. The best product comes when we’re together, and the fun of it is being there together, hearing each other,” Corrigan said in an interview with The Hoya. “Hearing that is like magic.”

Georgetown University Concert Choir rehearses in McNeir Hall in the New North Building, where Corrigan, now a junior, had not been since her first year on campus.

Corrigan’s experience is similar to that of many students in Georgetown’s performing arts community. Over the past year and a half, university performance groups have been forced to adapt to a virtual environment, with the alternative being not performing at all. And for most — if not all — performing arts groups and classes, adapting meant doing their best on Zoom.

After overcoming the difficulties that accompanied the arts over Zoom, students and professors are happy to be back to performing in person. But some performing arts groups still are not out of the woods as they now face new challenges in readjusting to on-campus life.

Faced with new challenges — namely performing in a virtual space while recruiting new students — the performing arts community improvised, whether that meant rewriting scripts or redefining the roles and responsibilities needed to put together virtual performances during the COVID-19 pandemic.

Directors who had never before considered producing a play in a virtual environment had to figure out what student theater would look like online, according to Michael Williams, a professor in the theater and performance studies department and artistic advisor to Georgetown cocurricular theater groups.

The April 2021 production of “Dear Elizabeth” by Nomadic Theatre, a student group dedicated to producing theater with aspects of social awareness, exemplifies that digital innovation, according to Williams. The play was adapted by its director, Amy Li (COL ’22), for a 10-person cast rather than the typical two-person cast. (Full disclosure: Li formerly served as a photo assistant for The Hoya.)

Li told The Hoya that adapting the play logistically worked much better for Zoom and gave more students the opportunity to participate.

“The play that I picked prior was an ensemble piece, and that obviously wouldn’t work very well on Zoom,” Li said in a phone interview with The Hoya. “We also wanted this to be a way for them to still build community.”

The switch to Zoom also provided creatives with an opportunity to push the boundaries of theater. Fatima Dyfan (COL ’21) considered multiple performance formats when organizing her senior thesis play “Sunbath,” of which she was the playwright and creative lead.

The Black Theater Ensemble (BTE) and the theater and performance studies department co-produced “Sunbath,” and Mar Cox (COL ’16) directed it.

The play tells the story of the evolution of a Black radical feminist, and it centers on the theme of Black womanhood, according to Dyfan. The play’s story and themes — not the virtual medium — were supposed to take center stage, Dyfan said.

“We could not have extensive production elements that are traditional to the theatre. So there was a lot of leaning into images and words to tell the story. It was important to me as an artist to consider what was most feasible, resourceful in my toolkit,” Dyfan wrote in an email to The Hoya. “This story in this moment called for something much more intimate and accessible.”

The virtual format challenged not only directors, but also production teams, who experimented with mixing prerecorded performances with live Zoom performances. They also tested new techniques, like using animations, green screens and video processing software, all to improve the virtual performance experience for the actors and audience alike, according to Williams.

Mixing and synchronization of audio files were especially important for choir and other musical performance groups. The concert choir produced virtual performances by syncing together individual recordings of each singer, according to Corrigan.

“You have to recraft the medium of choir and theater and all that sort of stuff in the virtual space,” Corrigan said. “But it was exciting to see that you can still make do.”

Beyond the logistical challenges of virtual performing arts, connecting with new students was a concern for Georgetown theater groups operating over Zoom.

For newcomers to the Georgetown drama community, joining a student performance group at this time could be an uncertain experience, according to Zan Haq (SFS ’24). When Haq joined GUerrilla Improv in the fall 2020 semester, he was unsure whether improv could even be successfully done over Zoom.

“I probably did not have the highest expectations going in, just because I was really unsure what improv would look like in a digital environment. Could we still be funny?” Haq said in a Zoom interview with The Hoya. “I was so surprised, going in, how the creative directors of GUerrilla were able to find different means in order to make it work.”

Dyfan said that even after returning to campus, the theater and performance studies department should continue exploring the unorthodox formats that gained prominence by necessity during the online academic year.

“I do think that they will continue this trend of not necessarily online performances, but maybe solo shows, or less people in a show, or new theater locations,” Dyfan said. “What is a theater? What are different shared spaces that are a little bit more conducive than a small black box? I think we’ll become innovative about what shared performance means because I think that’s what theater is. It’s shared performance.”

Closing the Curtain on Virtual Theater

Now back on campus, student theater groups as well as the theater and performance studies department are preparing for a busy performance schedule ahead after more than a year without in-person theater. But the pandemic is still impacting Georgetown’s performing arts community, including through slashed budgets and ongoing COVID-19 safety protocols.

Classroom restrictions and indoor mask requirements remain in place for the health and safety of Georgetown students and faculty. Since acting relies heavily on facial expression, many professors have opted to move classes outdoors, according to Williams.

“If I’m inside, everyone has to be wearing a mask. Now, for acting classes, that can be a bummer,” Williams said. “I’m taking people outside as much as I can, because then, as long as we’re not too, too, too, too close, there are no restrictions on outdoor social distancing or mask wearing.”

The return to in-person classes is worth it, despite the minor inconveniences of working around COVID-19 safety protocols, as it has infused both students and faculty with new energy, according to Williams.

“It’s exhilarating. It’s so fun. It’s energizing, and it’s a long time coming. We all feel very good to be back and to be enjoying each other’s space together,” Williams said. “The students are excited to be back. There’s a lot of buzz. There’s still so much uncertainty, but we can’t change that.”

Ultimately, groups like GUerilla Improv may feel comfortable holding their in-person performances indoors. However, Haq is confident that constraints such as masks will not interfere with the quality of in-person shows or generally discourage students from performing.

“With just a little bit of tweaking and a little bit of adjusting, I think it’s a pretty seamless transition,” Haq said. “If we have to project our voices a little more to make a performance work, so we can be COVID-conscious, then I think our team is more than ready to accommodate.”

However, not all groups are comfortable with holding public performances. According to Mask and Bauble Dramatic Society Publicity Director Margaret Gleason (COL ’22), Mask and Bauble will limit attendance to the Georgetown community, which means no parents, graduates or local community members can attend its shows this fall.

Mask and Bauble plans to provide more livestream options and other resources to ensure its shows are available to everyone, according to Gleason.

“We’re probably going to be doing low or no admission for our shows this year, just for accessibility reasons,” Gleason said. “We’re also hoping to have shows where we have ASL interpreters and potentially shows with closed captioning available. That’s technologically a little bit more challenging. We’re going to do our best.”

While the performing arts community tries to move on from the pandemic, COVID-19’s financial impacts continue to linger, especially for student performance groups.

According to a university spokesperson, there have been no cuts to budgets for performing arts; rather, the Performing Arts Advisory Council received increased funding for the fiscal 2021-22 year. However, according to The Georgetown Voice, performance groups have lost access to other funding sources, such as revenue from ticket charges as well as the end of emergency pandemic funding.

In addition, the reallocation of gifted funds during the pandemic led to Mask and Bauble losing access to a fund of $15,000 of graduate donations it previously had in reserve, according to Mask and Bauble Business Manager Orly Salik (COL ’23).

However, these financial restraints have also spurred greater collaboration among Georgetown theater groups. Mask and Bauble is working with BTE on a new coproduction, “Night of Black Musical Scenes,” and Gleason anticipates there will be even more collaborative performances in the future.

“Coproductions are definitely a historic part of our programming,” Gleason said. “But we’re definitely doing more this year than we typically would in a single year, which is both because we’re excited about collaboration, but also because there’s a limitation of resources, and we’re trying to stay reasonable about what we can actually accomplish in a post-virtual world.”

Despite frustrations with financial limitations, theater groups are not discouraged and are making the best of the situation, according to Gleason.

“Theater is not about money,” Gleason said. “It’s about community. We have that amazing community, and we’re welcoming new people into it every day.”