French fierte is subtler than American pride. Flags are not omnipresent, the national anthem does not play before every sporting event and spontaneous chants of “F-R-A-N-C-E” do not break out, well, ever. The French are more confident and assured, so proud of their superior culture that they don’t even need to convince you of it.

Perhaps that is the biggest difference after Friday the 13th. The Parisian ease was shaken, the French confidence challenged. And throughout the city, as police dressed in military fatigues porting gigantic assault rifles idle on street corners and in metro stations, an air of uncertainty lingers. In that haze, the subtlety has faded. The tricolor flag is now everywhere, flying at half-mast, a visible marker of solidarity and a reminder that, despite everything, the country is still united and strong.

Of course it is, though. To quote John Oliver, France has the “f—ing croquembouche!” It can weather anything.

I was in the United Kingdom during the attacks and the subsequent weekend, only returning to Paris on Tuesday morning. I found myself riding the metro and trying to pinpoint what was different. “Was it always this quiet on the metro? Yes, right? I’m probably just projecting.” And then a few seconds later, “No, it’s definitely eerily silent now.”

That entire first week back, I felt something unspoken hanging over my conversations, waiting for the other person to acknowledge what happened and for us to share our horror. When one of my professors didn’t say anything about the attacks at the beginning of class Wednesday, I was stunned.

Even with that looming specter, I was comfortable back in Paris. Throughout my entire weekend in the U.K., I could not leave myself alone with my own thoughts, or else I would risk being subsumed by fear and panic. The articles I consumed during that weekend only offered glimpses of what was happening in Paris, and I couldn’t really believe the picture they were painting unless I saw it with my own eyes. I had left the country two hours before the attacks happened and, able to do nothing but watch helplessly, I felt like I had abandoned this place that was some kind of home.

Returning to the city helped. The morning I came back to Paris, I made a stop on my way home at Place de la République and gazed with solemn awe at the messages of fortitude and solidarity that decorated it. That same night, my host parents and I made a pilgrimage to the Eiffel Tower, lit up in the gorgeous Tricolore, and standing in front of it, surrounded by American tourists taking selfies, felt somewhat cleansing. That was the same night of tous au bistrot, where Parisians signaled their refusal to be cowed by terrorism by — of course — going to cafes and bars. Things here weren’t as bad as advertised.

Regardless, the aftermath of a terrorist attack is a tense experience, particularly at a university. As the French government increases military operations in Syria and extends a police state of emergency for three months, the U.S. experience after 9/11 tells me that just accepting these actions in a state of fear opens a Pandora’s box of problems. We should undoubtedly debate them in our classes.

Yet, when one student in my law course attempted to broach the topic, another echoed my thoughts precisely when she responded, “I understand the need to talk about national security and civil liberties, and I applaud you for bringing this up, but I think I’m still too much in shock to really discuss it objectively and intellectually.”

Accordingly, in moments of crisis and danger, we as a society place incredible amounts of faith in public officials, trusting that they will keep us safe in both the short and long term — without sacrificing the values that define the country. Emotions are still running high, but with a couple weeks’ distance, it is no longer taboo to question whether French, or American, officials have upheld their bargain.

To appear strong against terrorism, French President François Hollande has adopted stringent security measures, arresting people without warrants, threatening to close mosques run by radical imams without providing a clear definition of “radical” and preventing any large gatherings, including a march of solidarity.

To his credit, Hollande has at least not closed the doors on Syrian refugees, unlike 31 U.S. governors, but the attack has amplified the increasingly powerful voice of Marine Le Pen, head of the far-right National Front, which continues to demonize migrants in advance of the French regional elections to be held in early December.

That is not France. The closing of America’s borders is not the United States. These are words and actions that create the very alienation exploited by that disgusting terrorist organization to incite horrifying acts like that of November 13.

Stupid thoughts entered my head that weekend in London. I had attended a concert earlier that week and a soccer game; never mind the different days, never mind that each were at different venues far away from the targeted locations. The morning of the 13th, I had breakfast with two friends visiting Paris for the weekend and offhandedly mentioned that they should see the Canal Saint-Martin, only a couple of blocks away from Le Petit Cambodge and Le Carillon; never mind that they showed no signs ever of taking that advice. I dwelled on these moments, wondering if there was a series of unfortunate events that would have led to me or someone I know being at those sites.

These are the goals of terrorism: to create an environment such that any action, anywhere, anytime is paralyzed by the specter of death, to create a world where compassion is subsumed by fear.

The response must be never to succumb. “Meme pas peur,” read one of the signs at the Place de la République memorial. “Still not afraid.”

The response must be to take strength from the half-mast French flags, return to the cafes and bars and — above all — embody that incredible democratic motto of inclusiveness and community: Liberte, egalite, fraternite. 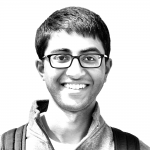 Kshithij Shrinath is a junior in the School of Foreign Service. This is the last appearance of LETTERS FROM ABROAD, which ran in print once every two weeks throughout the semester.