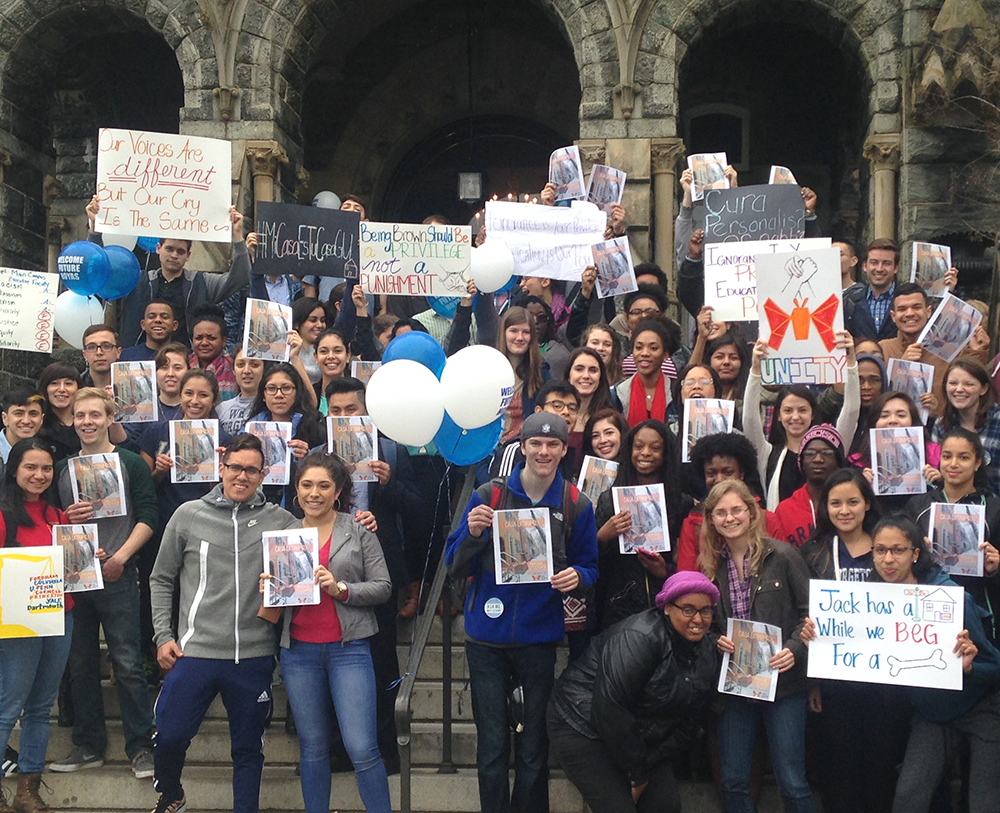 Around 60 students from both the Latino Leadership Forum and the Last Campaign for Academic Reform staged a sit-in in University President John J. DeGioia’s office Friday.

During the sit-in, they jointly presented a petition for a diversity course requirement and a proposal for the creation of a Casa Latina.

The groups joined together in solidarity after discussing both initiatives at a Black House event, according to LLF Facilitator Naomi Fierro (COL ’15).

“LCAR and LLF hold very similar values and are working toward the same goal: the recognition, elevation and inclusion of diverse student populations,” Fierro wrote in an email to The Hoya. “… We joined together in solidarity to engage the next generation of leaders to carry the torch on these initiatives that our Hilltop community so desperately needs.”

The group gathered in Red Square and passed out signs, then walked to DeGioia’s office, where they sat peacefully and presented both issues to members of DeGioia’s staff, including Office of the President Chief of Staff Joseph Ferrara, for 30 minutes.

The group could not meet with DeGioia, as he was in Panama for the Summit of the Americas conference at the time. The group requested that the administration deliver a written response to members of LCAR and the LLF on both issues by April 17. According to LCAR member Dan Zager (COL ’18), the groups staged the sit-in and requested a quick response since the school year is coming to a close in less than a month, leaving little time for student activism in the last few weeks.

“This last month of school is a key time for both the LLF and LCAR,” Zager wrote in an email. “In the coming weeks, both organizations will be hosting more actions to pass their respective initiatives, and we look forward to a continuing partnership between LCAR, LLF and any other organization who fights for the people on and off campus.”

“We are always proud and supportive when we see our students engaging, and I think this was a very respectful, peaceful, meaningful student demonstration,” Ferrara said to THE HOYA after the sit-in. “I applaud the students for their engagement on these issues.”

LCAR’s petition, distributed Feb. 23, has received around 1,200 signatures since its inception and remains open. The petition, which students presented at the sit-in Friday, calls for the creation of a two-course “Diversity, Power and Privilege” cross-list requirement.

Classes that LCAR cites meet the requirement will allow students to discuss race, class, sexual identity, gender and gender identity, immigration status and disability and ability. The petition does not propose to add any new classes to Georgetown’s curriculum, since over 200 existing courses fulfill LCAR’s requirement. Group members have been discussing and promoting the requirement since December 2014.

“I think that there are a lot of great courses at Georgetown that touch on different aspects of identity, race, class culture, ability, sexual orientation — diversity in its true sense,” LCAR member Colleen Roberts (COL ’15) said to the crowd assembled in Red Square before the sit-in. “Self-selecting individuals often take this course. What we’re trying to do is to ensure that all Georgetown students will be exposed to the ideas that many of us are exposed to during our undergraduate career.”

LCAR presented their proposal to the Main Campus Executive Faculty, a legislative body of 57 faculty members from each Georgetown school and two student representatives, March 27. The MCEF will vote on the requirement April 24, and if it passes with a minimum of 29 votes, it will be implemented by fall 2016 for the Class of 2020.

“Every Hoya needs to graduate with a fundamental understanding of the basic inequities in our world,” Zager said. “For 25 years, Georgetown students have been demanding a diversity requirement like this, and we are far behind our peer institutions like Duke, UCLA, Cornell, Brown, Princeton, Dartmouth, Fordham, I could go on. It’s about time that we need to do something similar.”

After the sit-in, Ferrara said that the Office of the President is working to consider the proposal.

“One thing I would say is that we have been working with our students on some of these issues to include the diversity requirement,” Ferrara said. “We’re very pleased to be working with them. I know there’s more work to be done, but we applaud the engagement and are very supportive of student engagement.”

The proposal for a Casa Latina, developed by the Latino Leadership Forum, calls for the university to create a permanent space for Latino Georgetown students, alumni and allies. The Latino community currently shares a space with the Black House, founded in 1972. Five students, chosen through an application process, live in the home and host events for the black and Latino communities each year.

Previously, Latino students have organized temporary cultural residences on Magis Row such as El Hogar del Poder Latino and La Casita, but a Casa Latina would be a permanent living space for the Latino community.

“We’re here to stand in solidarity with one another. … We’re here to claim something that has been long, long overdue, and that’s a Casa Latina, a safe space, a place that we can call home on the Hilltop,” Fierro said. “I’m so happy to see us all here, fighting in solidarity so that diversity in all of its roots can be appreciated here on this campus.”

The LLF released a survey in January to gauge interest in the creation of a Casa Latina. The open petition, thus far, has garnered 253 responses, 95 percent of which voiced support for a permanent Casa Latina.

“I feel like it’s a little bit odd to have a Black House but sort of have it include all cultures,” Zager said. “That, in a way, lumps all people of color together, which really isn’t fair. Most of the Ivies have a Casa Latina of some sort, or a residential community where we can appreciate Latino culture, and Georgetown doesn’t have one. We have a house for Jack the Bulldog, but we don’t have one for our vibrant Latino community.”

Ferrara said that the Office of the President is beginning to review the proposal for Casa Latina, but did not provide timelines for the office’s decisions on either initiative.

“That [Casa Latina] proposal has come along a little bit later in this cycle of engagement that we’ve had,” Ferrara said. “We kind of started working with the diversity requirement longer ago, and so it’s kind of farther down this path that we’re going through. Casa Latina is a relatively newer proposal, and we’re starting to have colleagues look at that and engage with that as well.”

Christian Veliz (COL ’14), who now works as a teacher in Harlem, N.Y. and participated in the sit-in support both LCAR and LLF, said he was impressed by the increased momentum in the support of both initiatives.

“This has been something that I think the momentum has been building on, and it’s something that I had conversations about as an undergraduate,” Veliz said. “This group of seniors, particularly, really pushed the initiative forward and was able to get organized in a way that I think previous classes haven’t.”

“We were very glad we got to participate in it,” Luther said after the sit-in. “We view both of these initiatives as very important for increasing the vibrancy of Georgetown’s culture and community. … I’m really impressed with the strong showing of people and I really hope the president’s office is receptive to these two initiatives. I look forward to seeing them implemented.”