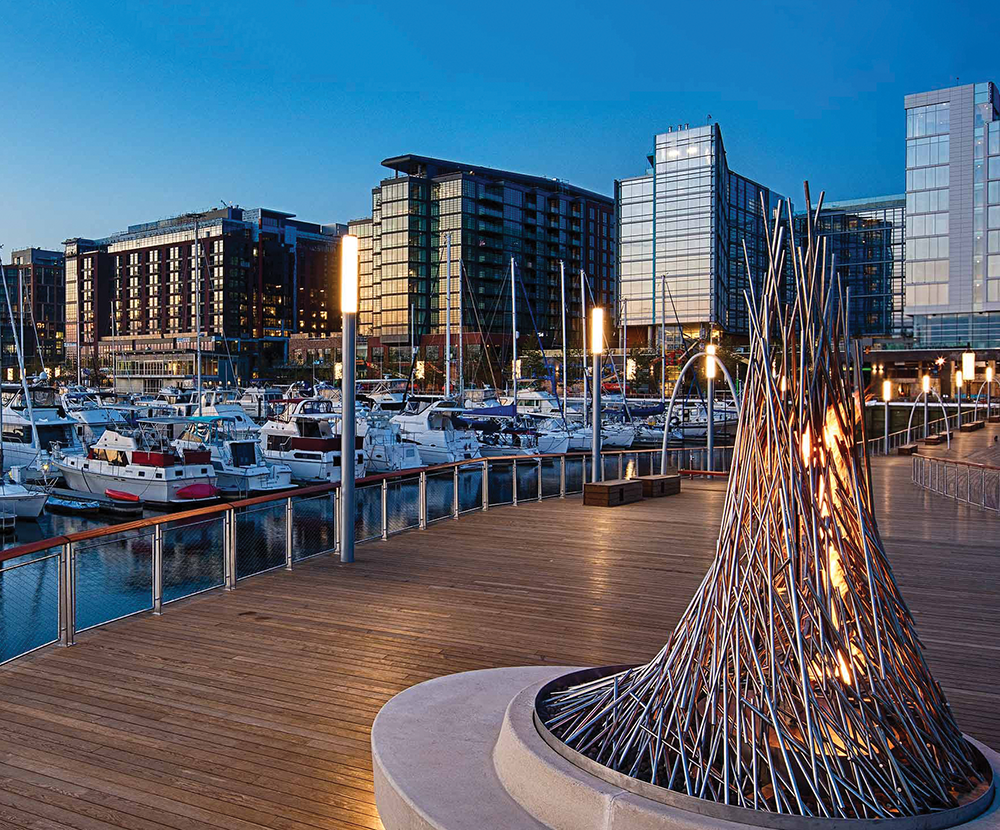 Five hundred feet from the port that carried members of the 272 enslaved people sold by the Maryland Province of the Society of Jesus in 1838 to financially sustain Georgetown University, plans for redevelopment of the Wharf have lined the southwest Washington, D.C. waterfront with new restaurants, shops and apartment complexes.

While plans to construct commercial establishments and residential buildings are already more than halfway completed, designs to examine and remember the history of the former slave depot have also emerged. From explicit references to a failed escape attempt by enslaved people to restaurants that draw influence from cultures touched by the Atlantic slave trade, the Wharf’s development is attempting to walk the line between acknowledging the past and giving new signifiance to historic spaces.

Reconnecting With the Past

Nearly 200 years after the members of the 272 enslaved people sold by the Maryland Province of the Society of Jesus in 1838 to financially sustain Georgetown set sail from the D.C. wharf, community members and those involved in the site’s redevelopment are taking steps to acknowledge the Wharf’s complex and dark history with slavery.

As a part of the redevelopment process, the Wharf worked alongside a committee of volunteers created by the Advisory Neighborhood Commission to identify important aspects of history to consolidate into medallions to be displayed on the boardwalk.

The purpose of this project was to inspire curiosity in visitors, according to Emily Eig, an architectural historian and preservation specialist who conducted most of the historical research on the Wharf.

“It was the idea that it’s a little tidbit that you can take and go, ‘Hmm, I’m interested in that,’” Eig said. “That might come up just by reading two sentences, or a long sentence, and that’s kind of an exciting project, really making accessible history.”

Outside the Wharf’s institutionalized development efforts, however, chef Kwame Onwuachi opened new restaurant Kith and Kin in 2017 in hopes to recognize the complex legacies of the Atlantic and domestic slave trade.

The restaurant is located within InterContinental D.C. and tells a story through its menu that stands in stark contrast to that of the modern glass buildings and upscale shops that surround the newly developed Wharf. Founder Onwuachi created the restaurant to serve homestyle Afro-Carribean food to honor his diverse heritage and the complex and dark history of the District’s waterfront regarding to slavery.

Onwuachi, who is of Nigerian, Jamaican, West African and Caribbean heritage, grew up in the Bronx but lived with his relatives in Nigeria for two years during his childhood. When Onwuachi got an offer to run a restaurant inside the InterContinental, he became inspired by his family legacy as well as the Wharf’s history, according to The New York Times.

“I could either do an elaborate tasting menu or I could do something to honor my ancestors,” Onwuachi said in an interview with The New York Times. “I hadn’t seen anything representing them in that vein — a place to celebrate our food while celebrating a special occasion.”

Beyond intentionally centering ancestral influences within Kith and Kin’s cuisine, Onwuachi has actively highlighted Kith and Kin’s historical connections to the domestic slave trade and invoked the memory of the GU272.

“272 slaves were sold to save Georgetown University from bankruptcy in the 1800s, and the community was ripped apart. The ship would have left from where Kith/Kin is today,” Onwuachi wrote in a Facebook post. “Slavery is not our history. It is the disruption of our history. That’s what Kith/Kin is about.”

Though efforts in the Wharf to acknowledge the site’s complicated history are important, a more active analysis is necessary to make meaningful progress, Maya Moretta (COL ’21), a member of the GU272 Advocacy Team, said. (Full Disclosure: Maya Moretta is a former member of the editorial board)

“I think it’s a great first step, but I hope that everybody can begin to think more critically about the legacies of slavery, not just in the historical lens but also making connections to all of the capital and wealth we have now,” Moretta said.

From the District’s Wharf, many of the 272 enslaved people sold by the Maryland Province of the Society of Jesus left the nation’s capital for the Deep South, where many descendants still reside today in Maringouin, La. Though the Wharf played a central role in facilitating the sale and transport of these people, the location’s legacy as a hub of the domestic slave trade is not always so quickly remembered.

In the 19th century, the District became a center of domestic slave trade, with the Wharf being one of the most active depots of the nation. Nestled between slaveholding states Virginia and Maryland, the District facilitated the sale of people in the Chesapeake Bay Region and the Deep South, which saw an increasing demand from the production of cotton.

In 1800, for every one free black resident, four enslaved people lived in the capital, and, by 1820, approximately 6,400 slaves inhabited the District. Enslaved African Americans built some of the Wharf’s original infrastructure and worked at the tobacco plantations along the riverside.

However, many enslaved people also used the Wharf as a means to escape to Pennsylvania or New Jersey, according to WAMU. Among these slaves were 77 people who attempted to escape on a ship called Pearl. The attempt, while unsuccessful, helped spur protests which led to the Compromise of 1850, ending the slave trade in D.C.

Though establishments like Kith and Kin are attracting attention to the Wharf’s historical ties to the domestic and Atlantic slave trade, the redevelopment of the Wharf has contributed to displacement of local communities.

Gentrification and development has displaced thousands in the District, and this displacement is occurring at the highest rates in Ward 6, where the Wharf is located. In some Ward 6 neighborhoods, low-income residents have decreased from being over 70% of the neighborhood makeup to nearly 20% percent.

While the Wharf has attempted to discuss slavery as part of its history, the redevelopment plan did not include any plans to erect a memorial recognizing its role in perpetuating slavery, according to Eig.

A complicated history also makes the process of remembrance more complex, as there is no one way to tell the whole story. Segregation and racism have prevented the public construction of a generational memory of slavery, imbuing cultural artifacts with great significance, said Eric Langenbacher, a Georgetown professor who teaches a proseminar called “Politics and Memory” in the School of Foreign Service.

“The memory of slavery and its effects is almost like a kind of cultural memory from the get-go in this country,” Langenbacher said in an interview with The Hoya. “[This] means that … those external raw materials that have to do with the food, memorials, documents, testimonies that exist are going to be all the more important, because we don’t have people with actual real experiences to help to construct that memory to it.”

By honoring the legacy of Onwuachi’s heritage, which is rooted in the African diaspora, Kith and Kin is one example of an attempt to preserve cultural memory and recognize the history of slavery in the Wharf area.

Though Onwuachi chooses to preserve the historical legacy of those sold in the Atlantic and domestic slave trade through food, Georgetown students have pursued other avenues to remember the enslaved perople shipped from the Wharf, whose suffering has benefited and continues to benefit countless students.

Artwork dedicated to the GU272 and student-led outreach trips to descendant communities are a few of the ways students have grappled with the legacy of slavery. The GU272 Advocacy Team has been a proponent of student organizing on campus, from leading community organizing events and educating students on the ways the 272 enslaved people have impacted Georgetown’s campus to drafting the referendum on the reconciliation fee that students voted on in April.

However, the 1838 sale is not the only instance that the university has benefited from the institution of slavery, and students should not limit their memory and focus to just one instance, Moretta said.

“Almost every building that was built before 1860 on Georgetown’s campus and in the neighborhood was built because of the institution of slavery,” Moretta said. “Buildings that we still currently inhabit and purchase coffee from are places where extreme violence and trauma occurred.”

Although the fee is a heroic effort, it can never truly make amends for Georgetown’s actions, Langenbacher said.

“All efforts will always be inadequate given the severity of the crimes, but any effort is better than no effort at all, because you’re at least hopefully achieving a semblance of healing,” Langenbacher said.