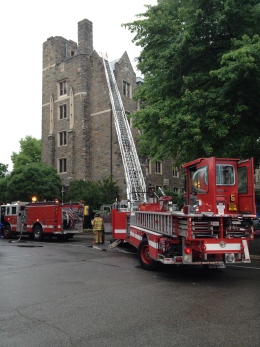 Seven firetrucks from D.C. Fire and Emergency Medical Services surrounded the residence hall at around 6:20 p.m. According to a letter from Executive Director of Student Housing Patrick Killilee that was posted on the doors of Copley rooms, the heat from the fire set off the building’s sprinklers, which extinguished the fire before D.C. Fire and EMS arrived.

The building sustained minor water damage on several floors, but no injuries were reported as a result of the incident, according to university spokeswoman Stacy Kerr.

The letter also reported that a restoration team will be working on site to extract water and clean up the damage from the incident. It asked students to stay away from the area north of the common rooms on the second and third floors. Additionally, residents of affected rooms will be relocated as a result of the fire.