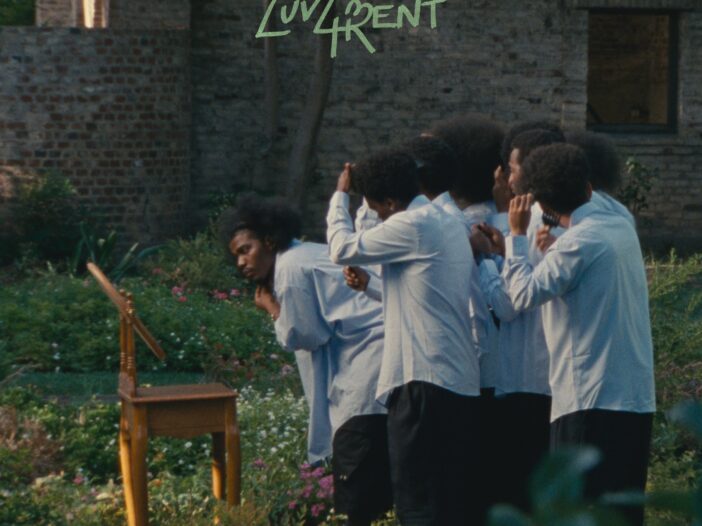 Four years after releasing “NOIR,” Smino has dropped his third studio album “Luv 4 Rent,” treating fans to 51 minutes of soulful singing intertwined with playful bars. The album expertly builds upon Smino’s past motifs by focusing much attention on its titular subject: love.

The St. Louis-to-Chicago hip-hop artist first broke onto the scene after collaborating with fellow rappers Noname, Saba and Mick Jenkins. Since releasing his first album “blkswn” in 2017, Smino has explored themes of hedonism and identity through the lens of personal experiences.

The first portion of “Luv 4 Rent” is characterized by pure fun. Driven by producer Monte Booker’s laid-back beats, Smino experiments with creative vocals while bragging about his carefree lifestyle — most notably, with his crooning delivery on “No L’s” and chorus-like, layered singing in “90 Proof.”

Never hesitating to crack a playful joke such as “I romanced her, I enhanced her / Diamonds dance in a Tesla, ‘Electric Slide,’ get it?” in the song “Matinee,” Smino’s eccentric personality envelops the album and makes for an immersive listening experience.

On top of his trademark woozy sound, Smino’s musical maturation is on full display from both the album’s production and creativity. Unlike his previous work, which occasionally sounded raw and incohesive, “Luv 4 Rent” manages a cohesive ambiance thanks to collaborations with producers like Booker, Childish Major, Cory Henry and DJ Dahi. Furthermore, the contrast in styles between songs such as the energetic, party-esque “Pro Freak” and the disorienting “Ole Ass Kendrick” keeps the album sonically interesting.

Smino’s artistic vision is further bolstered by strong performances from featured artists. A-list rappers such as J. Cole and Lil Uzi Vert meld well with Smino without losing their personal styles, while artists such as Doechii and Ravyn Lenae added distinctive performance dimensions that elevated their respective songs.

Then on “Blu Billy,” he raps about the drive fueling his pursuit of fame and fortune: “we conditioned by condition / Capitalistic, read through the lipstick / Shit that they make up make us forget shit.”

Smino’s vulnerabilities emerge as he continues contemplating his view on love. Over hushed yet expressive beats, Smino wonders if he needs more genuine, loving relationships in his life. On “Defibrillator,” he recognizes that he is “real familiar with love / But I’m not immune to hate,” but further realizes how he’ll only “be loved when no one’s around.”

On “Garden Lady,” he confronts lost relationships after comprehending how “You lost me and you / ‘Cause I lost me in you, I’m exhausted / Really the truth is offered too much, I done turned to a voucher.” Despite sounding unwilling to let his emotions free at times, listeners get progressively closer to his authentic self as the album continues.

After his melancholic meditations, Smino does not lose sight of positivity. Songs such as “Matinee” and “Pudgy” return to the groovy, R&B-inspired high of the album’s beginning. Outros to “Defibrillator” and “Curtains” feature voice messages from family members expressing their admiration and care.

Finally, Smino ends on a note of self-acceptance and realization in “Lee & Lovie” as he confides in his partner: “Give so much of myself to others / I’m runnin’ out of self of my own shit / But as long as you put you first, we don’t got to rehearse.”

“Luv 4 Rent” is a triumphant album. Smino’s irresistible charisma is at center stage. His strong technical execution, meshed with undeniable creativity, helps transform the album from a collection of songs into a celebration of love, for yourself and for others.