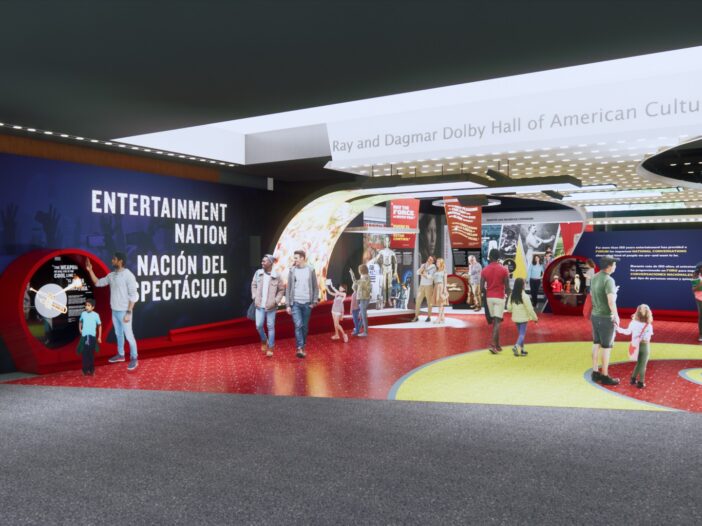 The Smithsonian’s National Museum of American History announced plans to open an exhibition dedicated to American pop culture, becoming the first-ever permanent exhibit to focus on the history of entertainment in the museum.

The bilingual exhibition, titled “Entertainment Nation”/“Nación del espectáculo,” celebrates the power of entertainment over the past 150 years in the United States and how entertainment has enabled important national conversations. The exhibition is set to open December 2022. Curators incorporated the museum’s extensive collection of nearly 1.8 million objects and artifacts from theater, movies, sports and television, including ruby slippers from “The Wizard of Oz,” Prince’s yellow “Cloud” guitar and Muhammad Ali’s boxing robe.

The exhibit will allow museum visitors to browse a diverse collection of artifacts from significant pop culture moments throughout American history in one location, according to Museum Curator Krystal Klingenberg.

“The museum has had a really fascinating and multifaceted collection of entertainment materials,” Klingenberg said in an interview with The Hoya. “It’s a fantastic time to pull all these things together so the public can see the treasures the museum has had — all in one place.”

Visitors will be able to move through pop culture moments through a series of interactive exhibits, utilizing immersive sound systems to amplify visitors’ experience as they are transported through the world of film.

Carefully designing the exhibition’s objects and themes was a difficult task for museum staff who tried to emphasize the importance of entertainment throughout history on visitors, according to Eric Jentsch, an entertainment and sports curator at the museum.

“We wanted to show that entertainment not only can reflect, but also participate in, our national history, and is a way in which people around the world engage in broader social and historical issues,” Jentsch wrote in an email to The Hoya.

While entertainment is often overlooked as an avenue to view American history, the exhibition seeks to highlight the influence of pop culture on public opinion and conversations surrounding American history, according to Klingenberg.

“Sometimes, entertainment is looked at with less weight. Music, movies, TV, sports, theater — all of these domains can push the conversation forward,” Klingenberg said. “Not only for expressions of who we are, but also for who we want to be.”

More than 200 objects will be displayed in the multimedia exhibition, according to the Smithsonian’s latest press release. The exhibit seeks to highlight the contributions of all genres of entertainment in conversations surrounding history and national identity moving forward.

“There are some real treasures that are going to be out that people will want to see for themselves,” Klingenberg said. “We have worked really hard to hone these ideas, these scripts, these objects to bring together something that we feel really does tell what we want to the public.”

John Troutman, who serves as the project director and lead curator of the “Entertainment Nation”/“Nación del espectáculo” exhibition, said he hopes the values that connect Americans will be expressed through the exhibit’s objects.

“I hope that we can help illuminate that our national entertainments — beyond spaces for escape from the daily grind (which we all need!) — have also, always been fundamental spaces for working out, for better and sometimes for worse, the degree to which the country at any given time can meet its ideals of democracy and justice, who can be included (and then, who has been excluded), and how those foundational tenets are experienced by everyone,” Troutman wrote in an email to The Hoya.

Jentsch said the exhibition creators anticipate that viewers will gain a greater understanding of the complex interaction between entertainment and American history.

“Our visitors will leave the exhibition thinking more of the influence Entertainment has had in their engagement with social and historical issues, as well as reflect on how they have used their own entertainment interests to navigate their own identities,” Jentsch wrote.