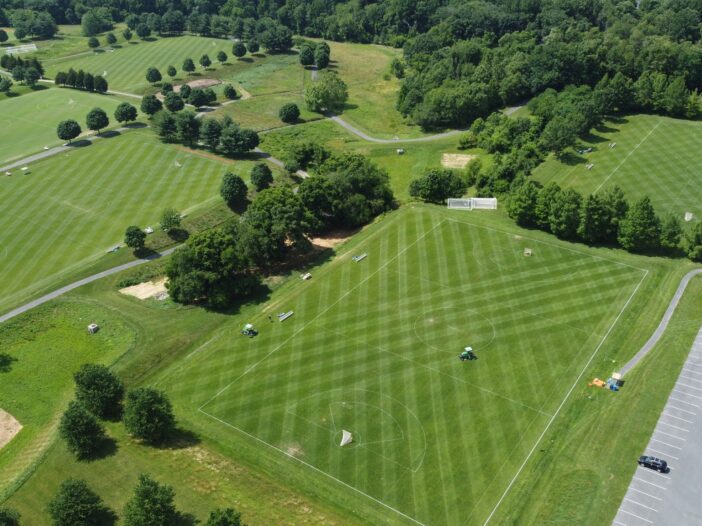 Fans of the Georgetown men’s and women’s soccer teams will now have to travel further than Shaw Field to watch the Hoyas in the Big East Tournament.

On Sept. 7, the Big East announced its men’s and women’s soccer finals and semifinals will take place at the Maryland SoccerPlex in Boyds, Md., for the next three postseasons.

The previous rule greatly favored the Georgetown men’s soccer team in the postseason because of the Hoyas’ sustained success as a top seed. The team has hosted the last five tournament finals, gaining a competitive home-field advantage. The women’s tournament was always played at a predetermined host school.

With the Big East’s announcement, however, Georgetown fans will travel to Maryland for at least the 2022, 2023 and 2024 postseasons. The Maryland SoccerPlex, completed in 2000, features 24 fields and welcomes over 1 million guests annually.

Its Championship Stadium, a bowl-like structure situated at the heart of the complex, features 3,200 hard seats and can host up to 5,000 guests, fitting for the larger crowds at championship games. The field itself features elevated out-of-bounds areas to contain rogue scoring attempts and raised stadium seating for an optimal viewing experience.

“The Maryland SoccerPlex has a history of hosting incredible soccer events,” Chris Schneider, the Big East’s executive associate commissioner of sports administration and championships, told The Hoya. “We look forward to working with them and their youth soccer community on creating memorable experiences for our student-athletes.”

The complex has hosted a medley of high-profile events such as games for MLS’s D.C. United, National Women’s Soccer League’s (NWSL) Washington Spirit and international friendlies, as well as charity and rugby matches.

The first round of the six-team tournament will still be hosted at the higher seed’s home turf. While the No. 1 and 2 seeds receive a bye, the No. 3 seed will host the No. 6 team and the No. 4 squad will play at home against the No. 5 seed, per usual.

Though fans of the Hoyas now need to venture off campus more frequently to root for their squad come playoff time, the new venue is still closer to Georgetown than it is to other Big East schools, such as St. John’s University in New York, DePaul University in Chicago or Creighton University in Omaha, Neb. As such, Georgetown supporters will still likely make up a healthy proportion of playoff fans.

Last season, the Georgetown men’s soccer team was the Big East regular season champions and therefore the No. 1 seed in the tournament, earning the privilege to host every game they played in. They sustained this level of play by capturing the Big East title at home over Providence, 2-1.

In the National Collegiate Athletic Association (NCAA) tournament, the men’s squad hosted its first three national tournament matches as the higher seed. Propelled by elite talent and the home crowds’ roars, the men’s team racked up home tournament wins against Georgia State, Providence and a thrilling penalty kick duel versus West Virginia University. They ultimately lost in the national semifinals to the University of Washington in Cary, N.C., the first off-campus venue of the tournament.

Similarly, the Georgetown women’s soccer team also dominated the Big East last season, capping off the Big East tournament with a 1-0 victory over St. John’s in the championship at Shaw Field. In the NCAA tournament, they demolished Central Connecticut State, 6-0, at Shaw Field before losing to Santa Clara.

If buses of Hoyas can trek down several hours to North Carolina, Georgetown soccer should have supporters flooding to the Maryland SoccerPlex for the next three years to witness more playoff excellence.

Correction: an earlier version of this story incorrectly indicated that the Big East Championships were played at the home site of the higher seed. While this is true for men’s soccer, the women’s tournament was always held at a predetermined host school.