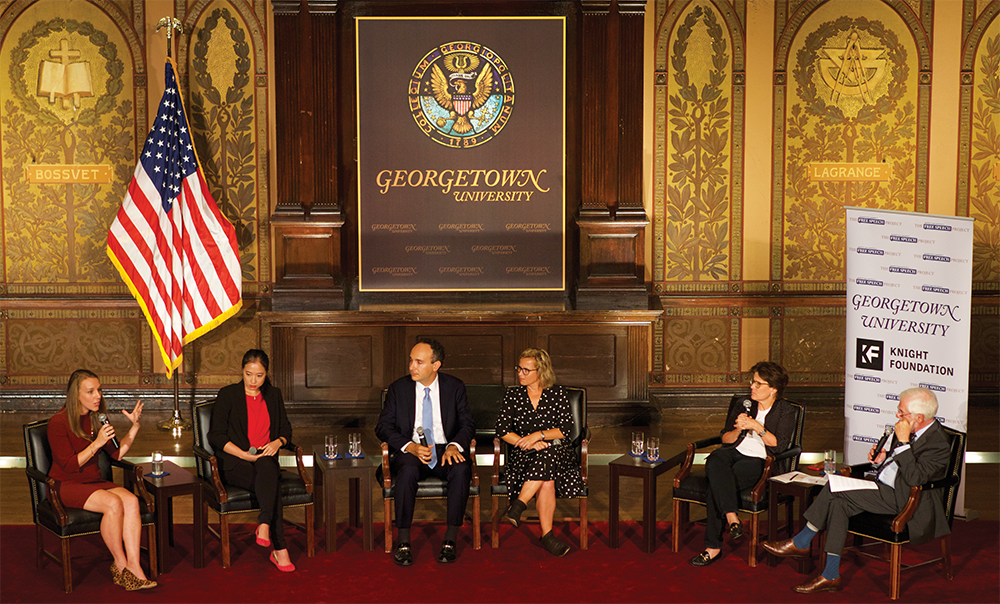 The U.S. federal government will inevitably regulate social media companies, but the extent of this regulation is still up for debate, technology journalists, lawyers and a Facebook representative said at a panel event Sept. 23.

The Georgetown University Free Speech Project hosted the event in Gaston Hall Monday. The Free Speech Project is a nonpartisan, independent initiative that assesses the condition of free speech in American education, civil society and government. The Knight First Amendment Foundation at Columbia University, which aims to defend freedom of speech and press through litigation, research and public education, co-sponsored the event.

Social media companies are analogous to cities without effective regulation, which poses a problem for user safety, according to Kara Swisher (SFS ’84), a contributing opinion writer for The New York Times and founder of Recode, a technology-focused publication.

Much of Monday’s panel discussion pivoted around the antitrust debate and whether Google, Facebook and Amazon should be regulated.

Although every panelist agreed that the federal government will eventually regulate big technology companies through antitrust or privacy legislation, big technology’s acquisition of smaller companies can also be valuable, according to Moylan. When Facebook acquired Instagram in 2012, it catapulted the smaller social media company to an improved profit model and user experience.

“When Facebook acquired Instagram, it literally didn’t have a business plan to monetize. It didn’t have spam filters,” Moylan said. “While yes, we are proud that it is an incredible, lucrative company that many, many, many people around the world enjoy, we feel that it is the synergies with Facebook and the systems that we’re able to incorporate into the app that has turned it into the success story that it is today.”

Alternatively, breaking up big technology companies would enable the smaller companies to explore new problem-solving routes, according to Swisher.

“I think the point of antitrust from my particular side and the people I interview — and I interview a lot of people on this topic — is to break them up to allow more companies to thrive,” Swisher said. “The concept is if you break them up, you create much more innovation and so the day you pull, say you pull YouTube off of Google, maybe YouTube will go: ‘Maybe we should bill ourselves as a safe place for people to be.’”

“I think that the moment for privacy legislation might be slipping away,” Jeong said. “But a lot of the stuff that we’re talking about derives from corrupt financial incentives that have really poisoned our democracy.”