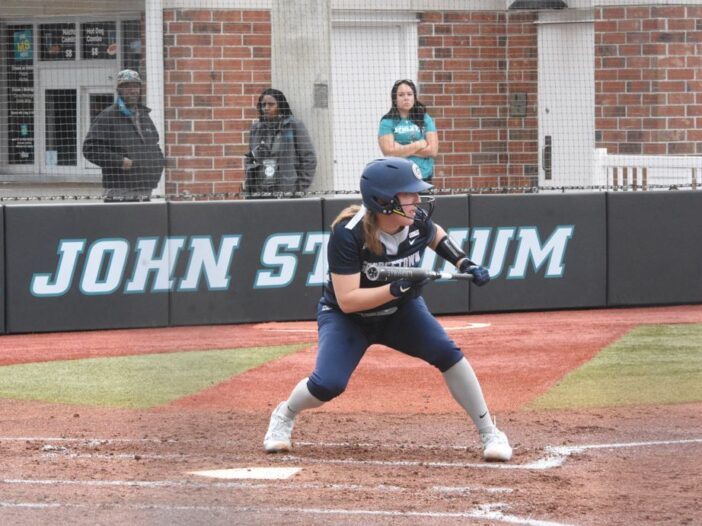 On a cold and rainy Sunday in Conway, S.C., the Georgetown women’s softball team concluded their season-opening weekend with a 4-6 loss to the Purdue Boilermakers. The Feb. 13 matchup was characterized by early back-and-forth offense, a game-winning fifth inning from Purdue (5-0) and a stifled comeback effort from the Hoyas (1-4, 0-0 Big East).

The game was the last of Coastal Carolina’s Kickin’ Chicken Classic, the first of three preseason tournaments on the Hoyas’ schedule. After two losses on Friday, Georgetown defeated East Carolina University (1-4) 3-2 and suffered a heartbreaking 9-13 loss against Coastal Carolina (3-2) in the bottom of the seventh on Saturday.

Against the Boilermakers, the Hoyas opened up scoring in the bottom of the second inning. A double to left-center from graduate outfielder Alyssa Chavez brought junior infielder Brittany Lew home and gave Chavez her first of three runs batted in on the day.

Purdue responded quickly at the top of the third, tying the score at 1-1 after a single to right field from pitcher Alex Echazaretta and a score from infielder Rachel Becker.

In the fifth inning, Purdue upped the ante again with a homer to center-field from outfielder Kiersen George, giving the Boilermakers three unearned runs. In the following minutes, Purdue infielder Jade Moy tripled and sent outfielder Kiara Dillon home, bringing their lead to a daunting 6-2.

In the sixth inning, though, Georgetown nearly came back. Chavez homered the ball to left field, bringing the game to within 2 runs. Still, this effort was not enough and Purdue walked away with a 6-4 win, rising to 5-0 on the season.

While the Hoyas now sit 1-4 on the season, their first Big East contest against Creighton (3-2, 0-0 Big East) is still nearly a month away on March 11.

Though the outcome was less than desirable, Georgetown’s battle with Purdue showed grit and character, qualities that will undoubtedly be useful throughout the entire season. Not only were the Hoyas coming off four games in just two days, but this is also the first competition the team has participated in since their 2020 season was cut short due to the COVID-19 pandemic.

On the field, there are many silver linings from this opening weekend outing. Prolific scoring from Chavez and dominant pitching from sophomore pitcher Julia Parker are just some of the weapons in Georgetown’s arsenal.

The Hoyas will look to shake off their losing weekend with the upcoming Furman University Tournament in Greenville, S.C. Their tournament play will begin with a Friday, Feb. 18 double-header against the University of South Dakota Coyotes at 11:30 a.m. and the St. Francis Red Flash at 2:00 p.m.