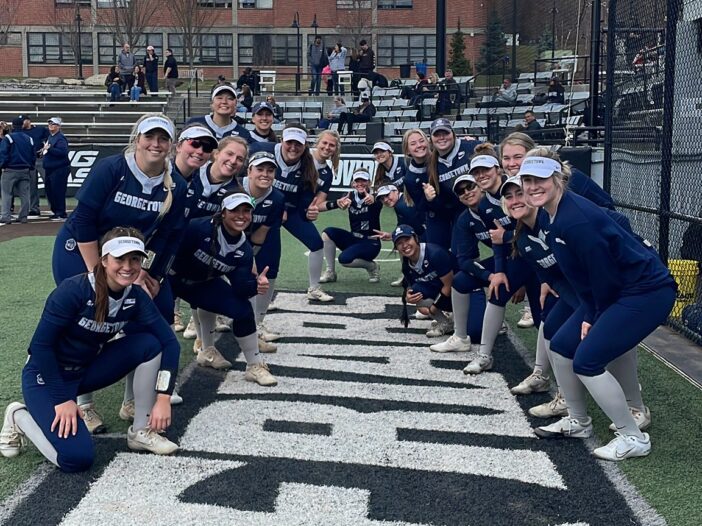 To cap a disappointing road trip for the Georgetown University softball team, the Providence Friars shut out the Hoyas in a 6-0 victory April 3. The Friars’ win closed out their three-game weekend sweep of the Hoyas, who now sit in eighth place in the Big East.

In the first contest of the weekend, Georgetown (12-17, 2-5 Big East) suffered a 6-8 April Fools’ Day loss at the hands of Providence (21-9, 8-4 Big East). Both sides remained deadlocked until Georgetown graduate first base Abby Smith went yard in the top of the fourth to put Georgetown up 1-0.

The Hoyas’ happiness was short-lived, however, as the Friars came screaming back with 3 runs of their own in the bottom of the fourth inning and 5 more in the fifth to take an 8-1 lead.

Going scoreless through the sixth, Georgetown began its equalizing push in the top of the seventh, when senior catcher Mae Forshey crushed a pitch for a 3-run homer, bringing the score to 4-8.

However, senior left fielder Cassie Henning struck out swinging to end the Hoyas’ comeback effort in their 6-8 defeat.

The next day, Georgetown got out to a hot start in the second game of the series and quickly grabbed a 3-0 lead in the top of the first. Forshey got things going for the Hoyas with a double to left-center before advancing to third on a Chavez single.

First-year pitcher Kayla Dunn batted a single of her own to push Forshey across the plate, giving the Hoyas their first run. Dunn and Chavez both scored off of a Kondo double to end Georgetown’s first-inning scoring drive.

Providence made the most of Georgetown’s lackluster pitching in the bottom of the second inning, when 3 successive walks and a passed ball allowed the Friars to notch an unearned run.

The bases were still loaded when Providence shortstop Rachael Petrarca fired a double into left field, sending all three of her teammates home and giving the Friars a 4-3 lead.

Georgetown could not score in the fourth, but Providence again benefitted from wild pitching by the Hoyas when Providence center fielder Elysia Cunnigan scored on a passed ball. Again in need of a comeback, Georgetown found the spark to snag 2 runs in the top of the fifth off of a single from Jones and a double from Dunn to tie the score 5-5.

In the bottom of the sixth, though, Providence snagged another run from an RBI double, sending the Hoyas into their last at-bat down by one. Georgetown was unable to plate any runs in the seventh, leaving one runner on base and securing its second loss of the series, 5-6.

The April 3 matchup proved to be the Hoyas’ worst offensive performance of the weekend; they gave up 6 runs to the Friars while notching none of their own. Providence second baseman Madi Traver hit a solo home run in the bottom of the second inning to open the scoring for her team.

Although Georgetown was able to hold Providence scoreless through the third, the Friars’ bats got hot in the fourth. Petrarca led off with a right field triple and was then pushed across the plate off of a double by Friars designated player Kari Shedrick.

Providence loaded the bases after a fielder’s choice and a walk, and, not intimidated by the two-out disadvantage, pinch hitter Lea Kosinski strode up to the plate and hit a grand slam, putting the Friars up 6-0. Neither side scored after the fourth, and the Hoyas retired to their dugout with the loss.

This series marked five straight losses for Georgetown. Over this losing stretch, they gave up an average of 6.4 runs per game and scored just 3.6 of their own.

The Hoyas have since taken steps to right the ship, winning a midweek away matchup against the Towson Tigers (11-20, 1-5 CAA) 9-6 on April 6. They still have five more series against Big East teams before the conference tournament begins May 12, so they can build upon this win as they prepare to contend with the Big East’s best.