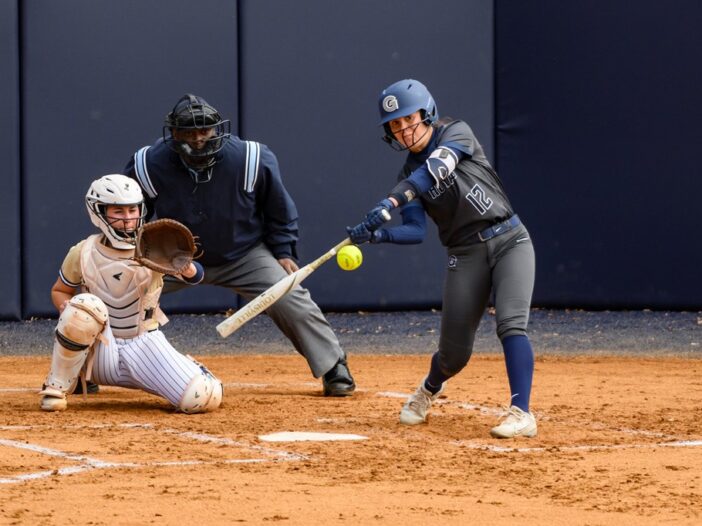 Georgetown could not quell Seton Hall’s offensive onslaught in the first or third game of its series, but it was able to slug its way to victory in the second.

The Hoyas came into the series scuffling, looking to turn their season around after getting swept handily in their last series against the Villanova Wildcats (22-19, 10-4 Big East).

In the first game, Seton Hall (17-17, 6-9 Big East) blew out Georgetown (13-22, 3-10 Big East) by a score of 11-1 in just five innings. The Hoyas were unable to muster anything on offense, scratching across just three hits the entire game. Pirates pitcher Shelby Smith dominated, allowing zero earned runs and walks and striking out two in five innings.

Georgetown’s lone run came in the bottom of the third. Hoyas junior infielder Lorena Vasquez-Inzunza doubled, then scored on an error by Pirates first-base Olivia Gilbert. Georgetown threatened to score again in the fourth and fifth innings — each time having two runners on base with only one out — but Smith escaped unscathed each time.

The Hoyas changed the narrative in the second game of the series, though, as their bats finally came alive.

Georgetown started strongly in the bottom of the first. Graduate outfielder Cameron Kondo reached on a hit by pitch and eventually scored on graduate infielder Abbey Smith’s RBI single to center.

Georgetown added to their lead in the bottom of the second, notching three runs in the inning. Hoyas graduate infielder Savannah Jones hit an RBI double to center and then scored two runs off a fielding error by Pirates second-base Ashley Colonnetta, making it a 4-0 ballgame.

After an uneventful third inning, Seton Hall surged back in the top of the fourth. They worked the bases loaded, and Gilbert smacked a two-run double to left field with one out. Pirates outfielder Marisa Pla followed with a sacrifice fly to left, bringing the Hoyas’ lead down to just one.

Georgetown immediately responded in the bottom of the inning. With two outs, Kondo worked a walk and Jones followed by slugging a home run over the center field fence. Going into the fifth, the Hoyas led 6-3.

Seton Hall scored one in the top of the fifth on an RBI double from infielder Taylor Hill, but Georgetown’s offense exploded in the bottom of the inning, scoring six runs and run-ruling the Pirates. The Hoyas graduate outfielder Alyssa Chavez started the scoring by hitting a two-run home run to left.

Georgetown then worked the bases loaded, which Kondo proceeded to clear by slicing a three-run triple down the left field line. Jones, the next batter, walked it off by scoring Kondo on a single-to-right center.

Georgetown’s starter — first-year Kayla Dunn — pitched well enough to propel the Hoyas to victory. She threw all five innings, allowing four earned runs on seven hits, one walk and three strikeouts. After the win, her record improved to 7-5 on the season.

The third game of the series was the only one of the three games to go the full seven innings. Georgetown’s bats stayed hot as they scored 10 runs, but Seton Hall exploded offensively with 13 runs on 15 hits in an exhilarating, back-and-forth affair.

Both teams plated a run in the first, but the Hoyas took a 2-1 lead in the bottom of the second on an RBI single from Kondo. The Pirates immediately responded with a sac fly in the top of the third to tie the game.

Smith smashed a two-run home run in the bottom of the third, but the Pirates scored five runs in the top of the fourth, making it a 7-4 game.

The Hoyas retook the lead in the bottom of the fourth with RBI singles from Jones and senior infielder Mae Forshey, as well as a two-run double to center by Chavez. Seton Hall responded again, belting a 3-run home run in the top of the fifth to give the Pirates a 10-8 lead.

After a quiet bottom of the fifth and top of the sixth, the Hoyas clawed back with a solo blast from Forsey.

In the top of the inning, Seton Hall scored three, cushioning their lead. In the bottom of the seventh, Chavez hit a solo shot — but it wasn’t enough. Georgetown fell to Seton Hall 13-10.

Although the two losses were disappointing, the Hoyas proved their offensive ability with double-digit outings in the second and third games. Looking ahead, Georgetown will face DePaul (20-19, 9-6 Big East) in another Big East matchup April 22 at 3:00 p.m.