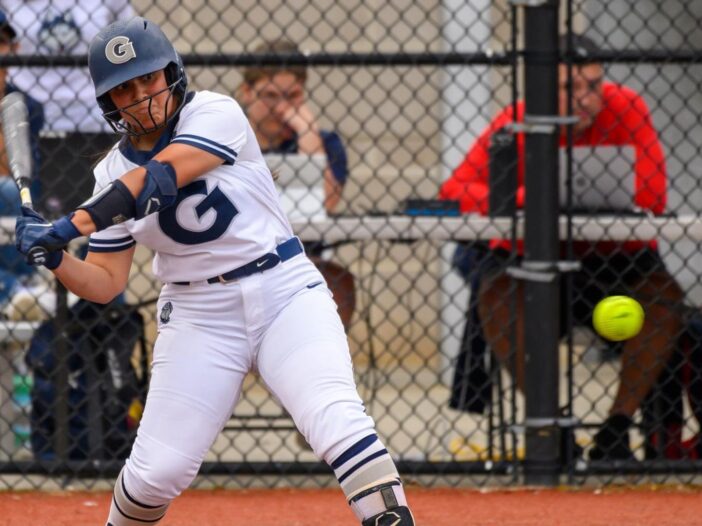 The Georgetown softball team failed to slow down DePaul’s hot bats as the Blue Demons won all three games in the series in Chicago, Ill., on April 23-24, bringing their win streak to seven.

The matchup pitted a Georgetown (13-25, 3-13 Big East) squad which has failed to find a consistent offensive rhythm this season with one of the best offensive teams in the Big East, DePaul (24-19, 12-6 Big East).

Georgetown came out with a hot start in the first game of the series, scoring two runs in the second inning via senior pitcher Cassie Henning’s two-run home run. Despite the solid start, the Blue Demons immediately responded with a homer of their own in the bottom of the inning, cutting the Hoyas’ lead in half.

From then on, DePaul was firmly in control for the rest of the game, scoring runs in every remaining inning. The home run hurt the Hoyas throughout the game, with the Blue Demons  launching a grand slam in the fourth as part of a five-run inning.

The Hoyas managed only four hits throughout the game. In spite of poor hitting, Georgetown had opportunities to score, drawing five bases on balls.

Georgetown’s struggles continued throughout the second game of the series. In what was only a five-inning game, the Blue Demons posted 17 runs in four plate appearances while simultaneously shutting out the Hoyas. The Hoyas’ offense continued to sputter, posting only three hits in the game.

DePaul did most of its damage in the third inning, posting 10 runs in the frame. DePaul notched another grand slam for the third home run of the inning.

This has become a consistent theme for Georgetown’s pitching unit, as the Hoyas had already given up a league-high 37 home runs before the series against DePaul. Similarly, the Hoyas have given up 182 earned runs in the Big East, the most in the conference.

Though they came up short on April 23, the Hoyas looked to bounce back in the third game of the series the next day.

The Hoyas started slow, allowing 12 Blue Demon runs in the first inning. First-year pitcher Kayla Dunn, who is second on the team in innings pitched at 99.0, struggled to open the game and allowed five runs, while failing to post an out. Sophomore pitcher Julia Parker, who has pitched a team-high 104.2 innings, did not fare much better against a red-hot DePaul team, allowing an additional seven runs in the opening frame.

It is difficult to fully attribute these bitter defeats to poor performances by Dunn and Parker, given their extremely high workloads all season long. The next highest for a Hoya pitcher is a third of Dunn’s workload at 33.0 innings. Continuing to rely on Dunn and Parker so heavily is perhaps what is causing the Hoyas’ struggles from the mound.

The Hoyas’ offense improved in the final game of the series. Georgetown opened the game with a single run in the first and followed up with five in the fifth and three in the top of the seventh.

Despite the late rally, the Hoyas fell well short of the comeback. Though they lost by 4 runs, they showed grit and tenacity in the attempt.