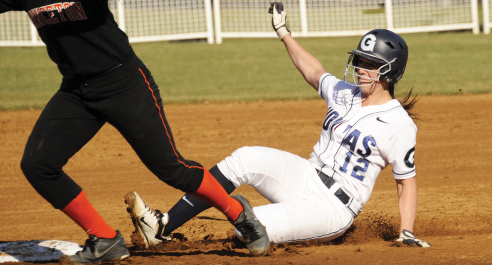 After dropping its first four games at the Florida Gulf Coast University Kickoff Classic in Fort Myers, Fla., the Georgetown softball team won its first victory of the season against LIU Brooklyn on Sunday, the last day of the tournament.

Despite the team’s apprehension about the switch from off-season indoor training to dirt field competition, Head Coach Pat Conlan felt evenly matched with the tournament competition.

“Overall, I think it was a quality schedule. It was a great group of teams to start the weekend with,” Conlan said. “The competition was fairly even across the board.”

Georgetown (1-4) opened the season against Memphis (3-1) in the Classic’s first game on Friday, recording an 8-3 loss. Senior Theresa Kane, junior Kelly Amen and freshman NeNe Campos all notched RBIs for the Blue and Gray.

In Friday’s second game of the day, Georgetown was defeated by North Carolina State (3-2) 12-2 after the Wolfpack tallied eight hits and took seven walks in the contest. Freshman pitcher London Diller started her fist career game for the Hoyas, but went only two innings while allowing six earned runs.

On Saturday, Georgetown dropped games to Florida Gulf Coast (6-0) 4-2 and Ball State (3-2) 5-1. Given the Hoyas’ smaller run differential than in the previous game, Kane saw improvement in the team’s effort.

“From the first game of the weekend to the last game, there was a lot of growth and improvement,”  Kane said. “It was only an upward climb and I think that is very telling of how our season will go.”

During both of Saturday’s matchups, sophomore Noelle Holiday stood out as a key player on the plate, driving in all of Georgetown’s three runs. The Hoyas showed versatility in the circle during the second game of the day as they faced Ball State. Sophomore pitchers Vannicola and Isabelle Ortiz as well as Diller played 4 and 1/3 innings, 2/3 innings  and two innings respectively. Diller struck out three and gave up three runs.

In the final game of the FGCU Kickoff Classic, the Hoyas topped LIU Brooklyn (0-5) 8-3. The victory marked Georgetown’s first win of the season.

“There was a lot of trust on the field and a lot of cooperation and working together,” Kane said. “It was nice to see.”

Conlan attributed the victory to solid play in the circle and at the plate.

“I thought we hit the ball very well. We played very good defense and had a very nice pitching effort. You put those three together and some really good things come with it,” Conlan said.

Georgetown’s next competition will be at the Gamecock Invitational in Columbia, S.C., against Michigan State (2-3) on Feb. 16.