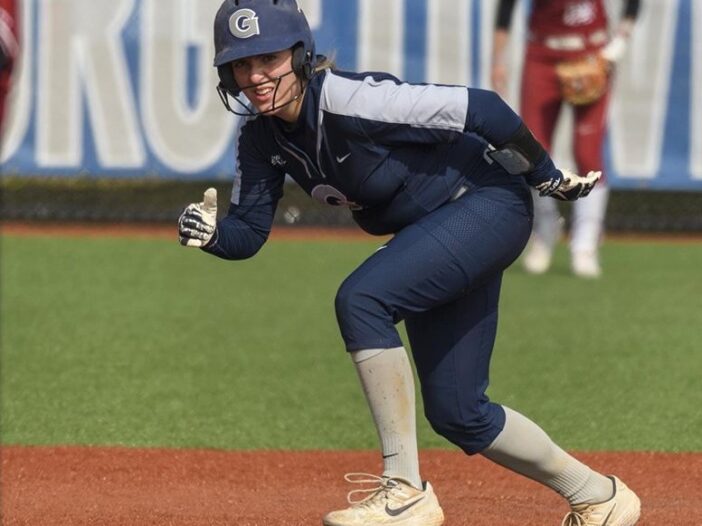 With a runner on second at the bottom of the seventh inning, the Hoyas appeared to have lost the game when Creighton utility Sam Alm singled up the middle. Then, Georgetown graduate center fielder Cameron Kondo threw a frozen rope home to gun down the potential game-winning run, forcing the game into extra innings.

Georgetown had a turbulent start with a successful trip to the plate in the top of the first. Then, a string of 2 outs followed by 3 consecutive walks left their bases loaded. First-year pitcher and first base Kayla Dunn knocked in two RBIs, giving Georgetown an early 2-0 lead.

This lead quickly disappeared, however, when Creighton scored 2 in the bottom half of the inning off a walk, double and pair of wild pitches.

The Bluejays’ pitching settled in for the next few innings, with back-to-back three-up, three-down innings, totaling three consecutive scoreless trips to the plate for the Hoyas. Soon, Georgetown’s pitching also found its rhythm, only allowing a solo home run in the third.

The fifth inning saw both teams return to the scoreboard, with Hoyas graduate infielder Savannah Jones hitting a 2-run shot to put Georgetown up 4-3. Yet again, however, their lead quickly dissipated with Creighton walking in a run in the bottom half to tie the game at 4-4.

The next inning and a half were uneventful with two runners left on base between the two teams. But, with a sudden game-saving dart out of center-field from Kondo, the game went into extras.

The Hoyas immediately rallied in the extension. Georgetown junior infielder Lorena Vasquez-Inzunza and senior infielder Kiki Besnard each knocked in runs for the Hoyas. The Bluejays managed to scrape by with just these 2 runs allowed, stranding another two Hoyas on base.

Georgetown sophomore pitcher Julia Parker, who came in for Dunn in the bottom of the sixth, had a quick inning to close out the game for the Hoyas 6-4. In Parker’s three innings of work, she faced 11 batters, giving up only 2 hits and no runs. Dunn also had an overall solid outing, striking out 7 through five innings of work and holding the Bluejays to 4 runs.

That said, free bases may be something Georgetown needs to clean up in the future. Throughout the game, the Hoyas totaled 5 walks, 2 wild pitches leading to advancing runners and 1 hit-by-pitch.

Though this was a successful outing for the Hoyas, it was slightly marred by their struggle to just get onto the field. They were meant to play two games against Creighton, but the game scheduled for Friday was canceled, and the Saturday game was played on Sunday due to inclement weather.

Nonetheless, this dominant performance for Georgetown should hopefully signal the start of a successful softball season. As a result of the team not competing in the 2021 season, they were ranked last in the Big East bracket for this season.

Georgetown will next host the UConn Huskies (12-10, 3-0 Big East) for a three-game series this coming weekend.