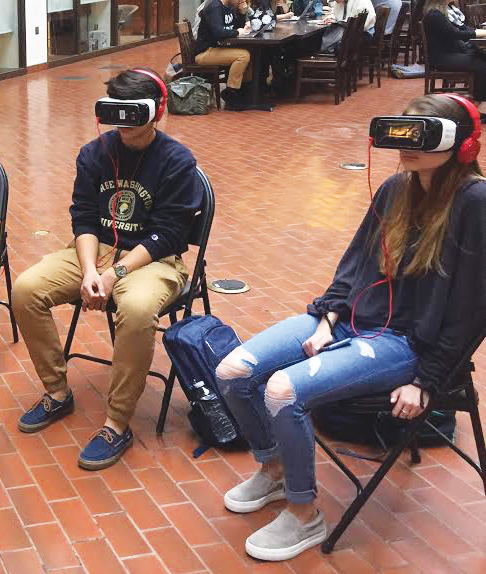 A two-weeklong exhibit simulating the experience of solitary confinement is on display in the Intercultural Center as part of the Georgetown University Prisons and Justice Initiative’s most recent efforts to explore the issue of mass incarceration in the United States.

The exhibit by the National Religious Campaign Against Torture features a replica solitary confinement cell and a nine-minutelong virtual reality video, produced by The Guardian, that immerses viewers in solitary confinement. Located in the ICC Galleria, the exhibit opened Jan. 16 and will close Jan. 30.

The exhibit is hosted each day by a formerly incarcerated individual who experienced solitary confinement, along with Prisons and Justice Initiative staff and student volunteers. These hosts discuss the virtual reality experience with viewers and share their own incarceration experiences.

The hosts and their backgrounds with the prison system give another dimension to the experience, Director of the Prisons and Justice Initiative Marc Howard said.

“Nothing can replace the experience of meeting somebody who’s actually been there,” Howard said. “I think it makes it really powerful; it really hits home.”

The Prisons and Justice Initiative began in February 2016 to address issues concerning the prison and criminal justice systems on Georgetown’s campus. The initiative conducts research, hosts events and leads programming in prisons.

The video places viewers into a typical solitary confinement cell, which usually measures from 6 feet by 9 feet to 8 feet by 10 feet. While solitary confinement goes by many names, it has certain characteristics, according to the NRCAT. It lasts for 22 to 24 hours per day in a cell alone or with one other person. The hallmark of solitary confinement is removal from typical contact with other people. Individuals in solitary confinement do not have access to prison programming or activities. Cells often induce sensory deprivation due to their small size and lack of external stimuli.

Initially, the virtual reality goggles were only going to be available for the first two days of the exhibit. However, the overwhelmingly positive response allowed the exhibit to secure them for its duration, Howard said.

Howard estimated that over 500 people, including university staff, students and visitors, have watched the virtual reality video.

The exhibit highlights statistics about solitary confinement and mass incarceration in the United States. Estimates place between 80,000 to 100,000 people in solitary confinement as of 2014, according to a report by the Arthur Liman Public Interest Program at Yale Law School and the Association of State Correctional Administrators.

The idea for the exhibit developed when the filmmakers of “Rikers: An American Jail,” a documentary that showcases experiences of men incarcerated in Rikers jail in New York, mentioned the NRCAT’s model cell exhibit to Howard. After learning about it, Howard began organizing plans to show it at Georgetown. He credited the support of the Office of the President as key to securing the exhibit.

The celebration of Martin Luther King Jr. Day in January also inspired the timing of the exhibit. King was held in solitary confinement, which is when he wrote his famed “Letter from a Birmingham Jail.”

“This is an issue that really connects with Dr. King’s legacy,” Howard said.

Howard saw the idea as a way to open up a space for Georgetown students and professors, as well as the greater Washington, D.C. community, to discuss reform.

“I think we as citizens, as engaged, informed citizens have an obligation to confront the reality that in this country we’ve been putting people away and forgetting about them, and losing sight of their humanity and their suffering,” Howard said.