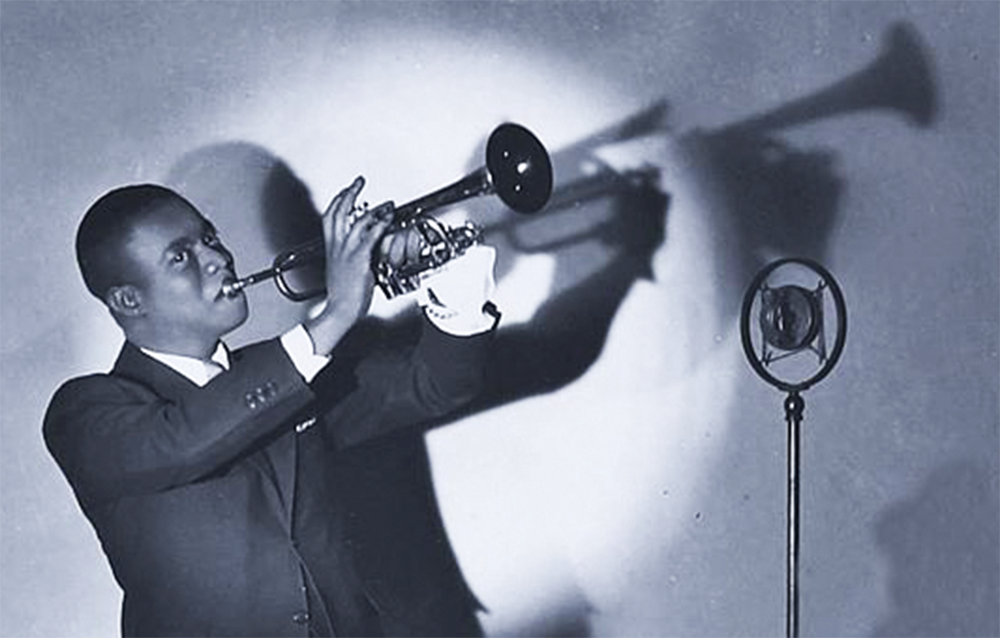 When it comes to understanding the power of black artists in the American musical landscape, there is certainly no shortage of icons from which to choose. In fact, it is impossible to discuss the history of American music without examining the origins and impact of black music. For consumers of music today, the overarching influence of black music is palpable in every chord and lyric.

“You cannot imagine American music without its African influences. It just doesn’t exist,” said Benjamin Harbert, an assistant professor of music in the Department of Performing Arts.

Black music adds a layer of diversity to the American identity and constantly responds to the black American experience. The daily struggles, triumphs, hopes and failures of generations of black Americans are carefully and methodically recorded not only in the pages of history textbooks but also by the music and lyrics of the era.

When slaves were brought to America, their music and culture came with them. Slave owners forced their slaves to convert to Christianity, and, out of this blending of European Christianity and African music tradition, the Negro spiritual was born.

Spirituals not only served as an expression of sorrow but also as a code to orchestrate escapes and rebellions. Music was not just a luxury to be enjoyed in free time but also a necessity to spiritual and physical survival. Although the commercial popularity of the spiritual died down after the Civil War, they experienced a resurgence during the Civil Rights Movements. In conjunction with gospel music, spirituals were used to express the oppression that still plagued blacks 100 years after emancipation. Often, music historians consider Negro spirituals to be folk music, which, by nature, must tell a story — a clear legacy of African oral tradition.

An example of this continuation is the work of early-20th century composer Will Marion Cook, a native Washingtonian who trained as a concert violinist and studied under Antonín Dvořák. Cook later composed musicals that included elements from African-American folk.

In the early 1920s, blues music began to flourish with the influence of work songs, spirituals and African music. In the harsh South along the Mississippi River under the regime of Jim Crow, blues offered the black community escape from the harsh reality of violent racism.

Blues music was dynamic and diverse, following no strict doctrine and using readily available instruments, sometimes even ones made at home. This trait made blues accessible to all people regardless of their socio-economic status or race. At a time when black people were not given seats at the table of American culture, they created their own, one that was diverse and eventually dictated music culture for the next several decades.

Perhaps the most well-known American musical export, jazz was born from a fusion of musical styles in New Orleans, where Africans, white Europeans and French-speaking Creoles coexisted.

more incentive to associate with English-speaking blacks, resulting in a mixing of their musical traditions. Soon, jazz was brought by black workers on riverboats to places like Missouri and Kansas, and took off in the nightclubs of southern Chicago.

“It is happy-go-lucky, but at the same time very serious tones of a people who were fighting to be heard and fighting against some forms of oppression,” said Maurice Jackson, a professor in the department of history and African American studies.

Musically, jazz is known for its improvisation and experimentation.

“There’s an old saying: You can never step in the same river twice,” said Jackson, referring to the idea that a jazz song is played differently every time, and no two performances are exactly alike.

Jazz is a dynamic genre that welcomes new influences and has a wide variety of styles and forms, such as the easily danceable swing, frantic and highly improvisational bebop associated with Charlie Parker, and experimental, chaotic free jazz of Ornette Coleman. Just as jazz musicians incorporated other forms of music into jazz — Miles Davis and Herbie Hancock’s renowned infusions of soul and funk, for instance — jazz in turn influences modern albums like Kendrick Lamar’s “To Pimp a Butterfly.” The wordless improvisational scatting of jazz singers like Louis Armstrong and Ella Fitzgerald have also inspired modern music.

“Some people say it is the origin of hip-hop,” said Jackson of scatting.

The impact of jazz has reached beyond just music. Bebop artist Dizzy Gillespie’s beret and goatee became trademarks of black

countercultural fashion, and celebrated figures such as Armstrong became the faces of black America in their heyday.

“In 1957, during the Little Rock Boycott, Eisenhower tried to get [Armstrong] to go to Russia to say, ‘What you’ve seen on TV is not true. We don’t beat our black people,’” Jackson said.

Although many would consider rock music to be a largely white genre, many of its origins lie in the black community.

“Part of the exuberance that you hear in early rock ‘n’ roll is tied to the migration of lots of African Americans as part of the war effort to cities and various parts of the country, excited about participating in this industrial boom that America was witnessing,” Harbert said.

Rock ‘n’ roll evolved most directly from the rhythm and blues of the 1940s and ’50s, both of which the record industry categorized as “race music” at the time. Although the first rock music was created with a black audience in mind, white teenagers soon caught wind through radio broadcasts and were drawn to its rougher sound and edgier themes.

Rock ‘n’ roll soon became a mainstream cultural phenomenon, with artists like Little Richard, Fats Domino and Chuck Berry gaining widespread play and popularity. The experiences of the late Chuck Berry, who passed away last weekend, reflect the complicated racial situation of America at the time.

“From the beginning of his career, he played to both white and black audiences,” Harbert said. “He writes about this in his autobiographical writings, about how hard it was to play to both crowds … He tried, through music, to overcome racial divisions between audiences, but, in playing rock ‘n’ roll, he never let go of his roots.”

As rock ‘n’ roll continued to grow in popularity among white audiences, the genre was rebranded by record labels as a white genre, and the relative presence of black artists diminished, with the exceptions of artists like Jimi Hendrix and Prince. Rock was the dominant genre of the mid-to-late-20th century and spearheaded a massive cultural movement that persists today — it is difficult to overstate the significance of its black origins and contributors.

For many young Americans today, the first thing that comes to mind when “black culture” is mentioned is hip-hop. The term “hip-hop” itself refers to more than just rap music; it encompasses a larger movement stemming from the urban black experience, including elements of expression such as deejaying, graffiti and breakdancing. Born in the black communities of 1970s New York City, hip-hop was heavily influenced by Caribbean immigrants who brought practices like “toasting,” or rhythmic vocal addresses, to crowds and the use of mobile DJ units to the neighborhood.

Competition has always been a dominant theme in hip-hop, and parties often had multiple DJs competing through volume and song selection. DJs also frequently hired MCs, or “masters of ceremony,” who spoke to hype up the crowd. Rap broke through to the mainstream with the 1979 hit record “Rapper’s Delight” by The Sugarhill Gang, and hip-hop soon became an unstoppable force in modern music. Run-DMC’s 1984 eponymous album was the first to sell 500,000 copies, heralding the dominance of rap in the ’90s and 2000s.

Musically, hip-hop’s defining feature is the use of electronic drums, synthesizers and looped samples from other media to produce unique backing tracks for rappers. In these beats, it is common to hear fragments of soul, R&B and funk songs from previous decades, so listeners can trace a direct lineage from the sounds of the past to the songs of today. For example, Nina Simone’s 1968 song “Do What You Gotta Do” is sampled in “Famous” from Kanye West’s 2016 album “The Life of Pablo.”

Hip-hop continues to have a huge influence on American culture, which can be clearly seen through fashion trends such as oversized athletic jerseys, gold tooth grills and bucket hats.  Lyrically, rap has always been controversial, with ubiquitous profanity and frequent themes of violence, drugs and misogyny.

However, it has also served as a vehicle for black empowerment and social commentary, through songs like Tupac’s “White Man’z World” or Kendrick Lamar’s “The Blacker the Berry.” Hip-hop is the culmination of urban black culture, and it shows little sign of decreasing in popularity or importance.

Modern pop stars of all races would not exist in their current forms without black music. In nearly every genre of popular music, black musicians have had a significant impact. Pop stars like Michael Jackson, Prince, Mariah Carey and Whitney Houston all represent the most recent infusion of black music into the American mainstream. Jackson’s “Thriller” catapulted black musicians to the forefront of the world, with 29 million albums sold.

This widespread appeal represented the changing views of Americans in regards to race — Jackson’s popularity could overcome the racial prejudice that had characterized America for hundreds of years. Into the 21st century, hip-hop and rap became integral parts of the American pop identity.

Black music adds more nuance to the way that America is perceived globally. Hip-hop music has altered the kind of pop music to which Americans listen, adding significant amounts of drums, bass and sampling. The black influence did not end in America, and has spread around the globe with rap and hip-hop scenes developing all around the world.

“Pretty much every style of music had some sort of mixing and separation. The history of the United States is based off of this process, of bringing together and then separating,” Harbert said.

Although black Americans today still face racial inequalities and prejudice in their lives, in forms both old and new, there remains a unifying thread that can be felt in aspects of music and culture — a determination to be heard.