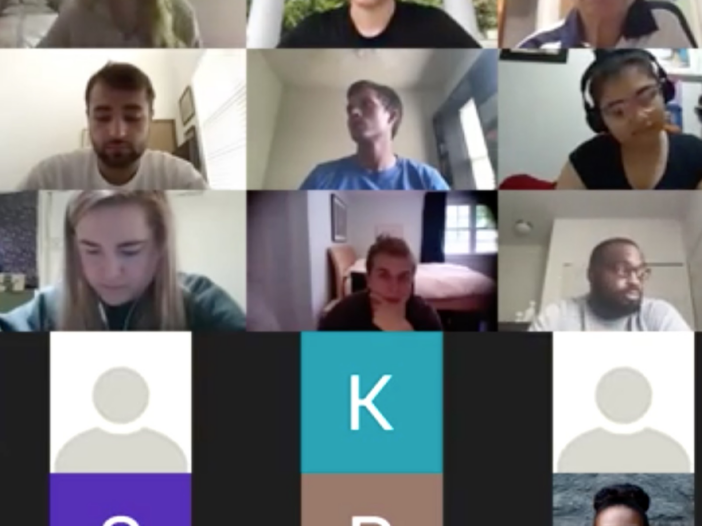 Freshman Leathan Posey (COL ’24), like many other students grappling with virtual learning, has grown tired of taking classes over Zoom.

“No matter how you look at it, spending hours on end in front of a computer is not the most desirable way to spend your time,” Posey wrote in an email to The Hoya.

“Zoom fatigue,” a new phenomenon brought by the transition of schools and workplaces to an online environment, has hit college students hard. Instead of interacting with professors and their classmates in person, students are now forced to attempt to connect with their professors and peers from their own home through a computer. Sitting through hours of classes and meetings on video-conferencing applications like Zoom is not only physically tiring but emotionally draining, according to several Georgetown students.

The exhaustion extends beyond classes. Posey says Zoom fatigue has significantly limited his involvement in extracurriculars. He has only attended one club meeting since the start of the semester.

“It is not as easy to justify spending your weekends, time usually devoted to enjoyable or leisurely activities, sitting at a desk with your computer on yet another Zoom call,” Posey wrote.

Jeremy Bailenson of Stanford University said in an interview with the Wall Street Journal one of the reasons Zoom seems so tiring is because the human brain has to work harder to produce nonverbal cues essential to our communication skills. These nonverbal cues, in combination with speech and movement, make up a concept known as synchrony, and this phenomenon is more difficult to perfect over video conference.

Eric Langenbacher, a professor in the government department, cited unstable connections, less interaction between students and a more limited attention span over Zoom as some of the main drawbacks of the virtual environment for both professors and students.

“It seems that doing everything online is much more work and more exhausting than in person,” Langenbacher wrote in an email to The Hoya. “I think many professors can feed off the energy in the room when a lecture or seminar is going well. Obviously, this doesn’t translate online.”

Junior Yifu Mu (COL ’22) mentioned physical fatigue as one of the main downsides of taking classes online. Specifically, the blue light from looking at a screen for too long has often caused him eye discomfort and exhaustion.

Despite these physical difficulties, Mu said professors have improved the quality of their classes since the start of virtual learning last spring.

“Beginning this fall semester, professors are way more prepared to instruct over Zoom than the second half of last semester,” Mu wrote in an email to The Hoya. “A lot of classes flow better, and I think that speaks to the level of adjustment that Georgetown professors have made and are willing to make.”

David Lipscomb, a professor in the English department, has tried to develop strategies to make his online classes more engaging. He has found students generally hold their attention well for about 10 minutes during online instruction.

“My Zoom classes work best when I script everything and move pretty quickly from one activity to the next,” Lipscomb wrote in an email to The Hoya. “Routines become ruts real fast on Zoom.”

Lipscomb has attempted to encourage student engagement by mixing up his lesson plans and asking students for feedback on how they feel in class in the hope of finding things to improve. He said later on in the semester, he plans to hold more one-on-one conferences with students, since these seem to work better over Zoom. Langenbacher also cited the chat function on Zoom as helpful in fostering productive conversations about course material during class.

Lipscomb and Langenbacher have also developed their own methods to cope with the stress and fatigue Zoom classes have induced over the course of the semester. Each has found trying to speak on the phone more, instead of talking while looking at a screen, has a positive influence on their mindset.

Langenbacher also believes taking walks and going outside to see scenery is beneficial. Yu also tries to go outside and get physical activity often to curtail the negative effects of Zoom fatigue.

“I definitely need that balance between sitting in my room in front of a screen and being physically active,” Yu said.

Georgetown University plans to release its preliminary plans for the spring semester by Nov. 16. Though some parents have been goading the administration to reopen campus, citing the negative health effects of online learning, continually rising COVID-19 cases in Washington, D.C., and across the nation have cast doubts on those hopes. The possibility remains that students and professors will have to contend with online classes for a little while longer.

Along with shorter attention spans, Langenbacher noted a more unexpected difficulty with online classes: trying to land jokes with an unforgiving virtual audience.

“It is difficult to tell whether a joke or anecdote lands because the regular in-person cues are not operative,” Langenbacher said.

For Lipscomb, if the spring semester takes place online, one significant challenge will still remain. “My sense of humor doesn’t seem to translate to Zoom. That’s been rough … and humbling.”