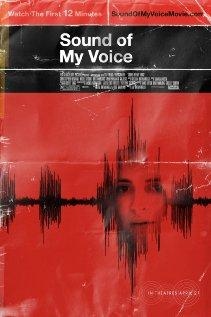 I’ve found few movies as unsettling as Sound of My Voice.  That being said, I was mesmerized from start to finish.  The plot is rich with suspense, the acting moving and the storytelling artful.  Especially considering the film’s small budget, Director Zal Batmanglij (COL ’02) does a brilliant job fashioning an atmosphere of eeriness in practically every scene.

In the opening sequence, Peter (Christopher Denham) and Lorna (Nicole Vicius) are blindfolded as they are driven to an unspecified location in Los Angeles. After being instructed to shower thoroughly and change into white hospital gowns, they are led into a basement containing about 10 other people dressed in the same unfortunate garb.  The truth is that Peter, a substitute teacher, and Lorna, a former party girl who has cleaned up her act, are covertly attempting to make a documentary about what appears to be a cult. But even with their outsider perspective, they aren’t immune to the otherworldly charisma of the group’s leader, Maggie (Brit Marling [COL ’05]).

Even if Maggie doesn’t truly hail from the futuristic year 2054, as she claims, she sure knows how to make an effective entrance.  With a white veil draped over her wispy blonde hair, breathing through tubes attached to an oxygen tank, she somehow manages to appear both delicate and intimidating.

It doesn’t take long to sense that the capricious Maggie is dangerous. One moment she is telling her submissive followers that they are weak (whether or not she sees the irony in that matter is unclear); the next she is providing them with quasi-wisdom. Shortly after that, she is gently coaxing them to face their fears until they are literally bawling on the floor.

Maggie’s outlandish set-up (or fraudulent scheme — it’s up to the viewer to decide), in combination with several other creepy aspects that go unexplained, culminates in a somewhat unsatisfactory manner.  Open-ended conclusions seem to be all the rage these days, but even those who don’t mind a lack of closure are likely to feel disconcerted after the movie’s final scene. The effort to be vague seems a little bit too ambitious.

However, risk-taking is a good thing in a directorial debut, even if it falls a little flat.  Batmanglij’s first endeavor is impressive, and Marling — who also received praise for her role in last year’s Another Earth, a collaboration with another Georgetown alum, Mike Cahill (COL ’01) — gives a riveting performance, instilling fear, hope and wonderment all at once.

Of course, questions abound both during the film and after it ends.  Even the identity of the genre escapes viewers, who are wondering whether the movie is a thriller or more representative of a science fiction tease. Successfully executing such an elusive tactic was quite a feat for Batmanglij and Marling, who co-wrote the film.

Thankfully, some of my questions about Sound of My Voice were answered after the screening on April 25 during a question-and-answer session with Marling, Batmanglij and Cahill. They shared their experiences as friends and Hoyas in the movie-making industry.

Sound of My Voice’s April 27 release is meaningful for the filmmakers in that it marks the anniversary of Georgetown’s first film festival, as well as the day that Marling met Batmanglij and Cahill.  Marling recounted the charming story of how, after feeling so positively impacted by the film they presented at the festival, she “basically stalked them all over campus” and even trailed one of them through the aisles of Vital Vittles.

After graduation, Batmanglij studied at the American Film Institute in Los Angeles.  When one of my fellow audience members asked how he came to attend film school when his friends Cahill and Marling had chosen to collaborate on another project directly after graduation, Batmanglij maintained that the decision always depends on the individual. He explained, “I blossomed at film school … all the pieces came together.  I needed more incubation — it was kind of like a boot camp.”

Cahill remarked, “He got to pay for film school, and I got to live vicariously through him.”

The alums later shared their philosophies regarding their respective roles in filmmaking. “You never want to be caught acting. You just want to be,” Marling cautioned.

Batmanglij agreed. “The most important job is being the barometer of authenticity.”

“I always think of directing as a sweater-making,” Cahill added, referring to the weaving together of different parts over time.

All in all, the message of the trio’s return to the Hilltop is clear: Never fear, liberal arts undergrads.  Sometimes English degrees are fine preparation for filmmaking, and there’s always hope that you can make it in Hollywood — with your two best friends.