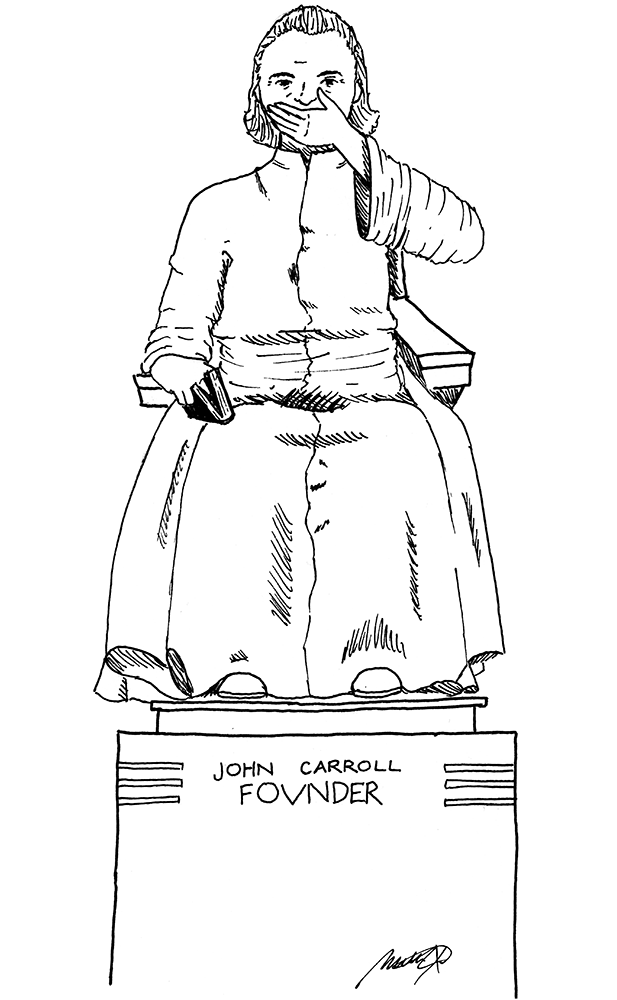 Georgetown students are certainly not prone to keeping their opinions to themselves: Dialogue, debate and activism are prevalent on the Hilltop. And yet, a collective veil of silence is drawn over some salient issues. These 10 topics — whether overlooked, downplayed, forgotten or ignored — are worth bringing to the table.

The university’s staunch advocacy of interfaith dialogue has led to exemplary engagement between practitioners of different religions. While an increasing number of young people across the country distance themselves from organized religion, campus culture can suggest that the only intolerable faith is the absence of one. Abiding by Pope Francis’ urging to engage in a rigorous dialogue with atheists would enrich the Georgetown community’s understanding of different belief systems and those who can otherwise feel ostracized.

Ever see a student who exudes composure and energy and think, “They must not be working very hard?” It’s easy at this university to believe that stress is normal, if not expected. But getting overwhelmed can happen to anyone juggling the demands of college life and students face an acute risk to their mental health. When students are suffering, they need to know that they can and should seek help. The Georgetown community could do more to address and acknowledge the anxiety, sadness and guilt that can accompany overbearing stress. As hard as it may get, no one should feel ashamed of the health issues they encounter, nor should they reinforce a culture that promotes and ignores them.

Almost every freshman at Georgetown hits a rough patch at some point, be it a week, a month or even the entire year. Whether it be from social transitions, the fast pace of the Hilltop, rejection from student groups or the realization that one is no longer at the very top of his or her class, freshman year gives ample opportunity for second guessing. It’s rare to encounter a Georgetown student who won’t admit to such unease retrospectively, and yet many struggling freshmen stay silent amid constant proclamations of unequivocal love for the Hilltop.

Who’s kidding who: More time than we often admit is devoted to measuring Georgetown against other competitive East Coast schools, especially those in the Ivy League. To compensate, students point to our high selectivity, refer to Ivies as “peer institutions” and try to forget the rejection letters that may have guided us here. And while Georgetown’s non-Ivy status creates a kind of chip on the shoulder of our student body, we rarely acknowledge it. Many learn to love Georgetown, but some students often can’t forget the one that got away.

Poverty in the District

The District of Columbia’s poverty rate is higher than that of any state. Today, almost one in five residents of Washington, D.C., lives below the poverty line, and the District’s AIDS infection rate is among the highest in the world. A portion of the student body admirably prioritizes social justice in the District. But while it is easy to be misled by the cobblestones and million-dollar townhouses of Northwest, suffering among our neighbors is too prevalent for us to turn our backs.

An assumption on most college campuses is that most, if not all, students are sexually active. With a notorious “hook-up culture,” this assumption might appear especially on point at Georgetown. However, there is a significant portion of students — upperclassmen and freshmen alike — who choose to abstain from sex, whether it is due to religious beliefs, the fear of sexually transmitted infections or the simple fact that they do not feel ready or have not found the right partner. And though losing one’s virginity may now seem inconsequential in a context where everyone else seems to have already done so, acknowledging a variety of sexual choices is most prudent.

We all have the privilege of living on a beautiful and well-kept campus. While countless photographs celebrate Georgetown’s architectural beauty, there is too little campus-wide regard for those who make it possible. Georgetown, as the largest private employer in the District of Columbia, employs not just professors but also hundreds of custodial and maintenance workers who work every day in close proximity to students to keep Georgetown functioning. It’s commendable that the campus community has worked to embrace employees at O’Donovan Hall, but let’s not forget the many others in what are often thankless jobs.

From our storied men’s basketball team to national powerhouse soccer teams, Georgetown can boast an impressive roster of Division I athletic talent. And though those sporting a backpack with the “G” emblem share a campus and the classroom with everyone else, an implicit and unspoken separation exists between student athletes and the rest of the student body. Race and socioeconomic background are also underlying factors in that divide, as is an unfounded skepticism in their academic qualifications. Competitive teams will inevitably be close-knit as fans cheer from a distance. Off the field, however, students and student-athletes share too much to be divided.

As job recruiters increasingly seek applicants with specialized skills, a shift toward pre-professional majors at Georgetown should not go unacknowledged. Applications to the McDonough School of Business have spiked, and the business administration minor in the College has steadily grown in popularity since its introduction in 2010. The search for jobs is competitive, and many students are adapting to evolving hiring expectations by choosing business-oriented classes in favor of those in the liberal arts core. That has dramatic implications for the academic character of Georgetown, and it can’t go by unnoticed.

The consequences of socioeconomic divisions among students are vast. Everything from internship accessibility to housing and nightlife activities are influenced by personal family finance. Commentary on class is often superficial — who went to private high school versus public, who wears Vineyard Vines and who shops at discount stores. But the outer aesthetic fails to fully address real struggles for students that are rooted in their backgrounds. To their credit, organizations like the Georgetown Scholarship Program and the Community Scholars Program have made strides in helping these students acclimate to the Georgetown community. Many at Georgetown have privileged backgrounds. Others don’t. In virtually every aspect, socioeconomic background shapes one’s experience at this university.