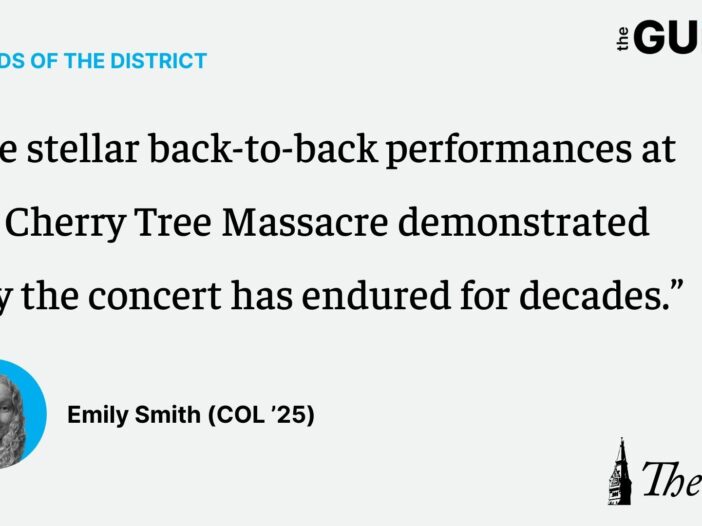 The Georgetown Chimes hosted the 49th annual Cherry Tree Massacre in Gaston Hall, the first in-person version of the event since the pandemic began in 2020, effectively putting the audience’s shower-singers to shame in the process.

The show, held Feb. 25 to 26, usually features performances from schools across the country. This year, COVID-19 restrictions limited the performers to just Georgetown groups, which still provided for a show bursting with talent. The Chimes have hosted the event since 1974.

The concert featured six Georgetown groups: The Saxatones, The GraceNotes, Superfood, The Phantoms, The Capital G’s and the Chimes.

Each group performed three songs ranging from oldies to modern pop. Some groups, like Superfood, brought the audience close to tears with their renditions of “The End of Love” by Florence and the Machine and “Die For You” by The Weeknd.

Others, like The Phantoms, displayed powerful vocals and the ability to entertain with “Summertime” by Miles Davis and “Home” by Edward Sharpe and the Magnetic Zeros.

The night was rounded out by a heart-wrenching performance by the Chimes of “When We Were Young.” The range of the lead singer had a uniquely melancholic tone and a genuine conviction of the lyrics that left the audience stunned. Furthermore, the Chimes featured a performance of the Georgetown Fight Song featuring alumni of all ages from the group.

When one thinks of a cappella, most think of the iconic movie “Pitch Perfect.” Therefore, most students enter Gaston Hall with the expectations of either seeing professional singers perform intensely-rehearsed selections or expect that the performance will not live up to the movie.

Although the Cherry Tree Massacre is not a cinematized a cappella concert, the groups managed to defy any negative expectations that anyone may have had about a college student’s vocal ability.

The range of all the lead soloists left the audience stunned, with students even receiving standing ovations. The initial hesitancy of attending an a cappella showcase was resolved by the first song.

Where the vocals thrived, the enthusiasm could have improved a bit at times. All of the groups made noticeable efforts to engage with the audience, but the smiles and unchoreographed sways left occasional awkwardness.

Their clothing aesthetics made up most of the difference, with The Saxatones sporting a neutral color palette, The Capital G’s matched in blazers, and The Phantoms dressed in purple. The color blends of all the groups was appealing to watch and made up for the slightly awkward and unsynchronized movement.

While these performers are not headliners, live music does not need to be from a superstar to be entertaining. At $10 a ticket, the Cherry Tree Massacre provides a relatively inexpensive way to hear selections of music that everyone can enjoy, especially when you consider that the lowest price of a Dua Lipa concert — who performed in Washington, D.C., on March 2 — is $90.00.

On-campus music events not only mitigate transportation costs but also eliminate the extraneous time spent before and after. The walk to Gaston Hall is no more than 10 minutes for most students, and the time spent in line is minimal. In total, the time commitment is less than three hours, which is vastly less than  any off-campus event.

Overall, the stellar back-to-back performances at the Cherry Tree Massacre demonstrated why the concert has endured for decades. The event provides a unique opportunity to hear the talent this often overly academic-focused environment is hiding. The vocal talent that emerged from this performance exceeded expectations, providing me all the joy of a typical concert, for one-tenth of the price.

Emily Smith is a first-year in the College. Sounds of the District appears online and in print every other week.