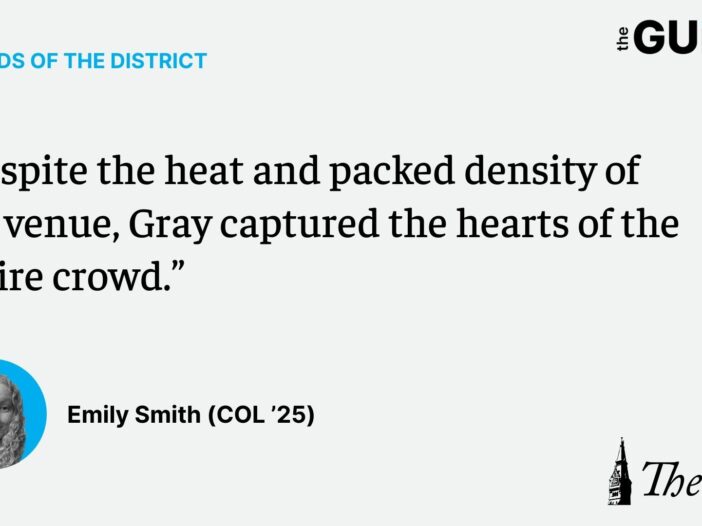 Conan Gray brought teenage heartbreak to The Anthem for his 2022 world tour.

Coming off the release of singles like “Jigsaw” (2022) and the smash success “People Watching” (2021), Gray performed both old music from his sole album “Kid Krow” (2020) and his newer singles. On March 12, Gray explored the anger and sadness that accompany growing up, bringing the tightly squeezed crowd together through his melodic musings above all.

After waiting in a line wrapped around the block, the attendees of the sold-out show squeezed into The Anthem. Immediately the atmosphere adopted a lively ambiance, as people called out to others to compliment their signs and ask for pictures. In the middle of the crowd, a man drew attention with his “This is My Therapy!” sign.

The shouting quickly subsided with the opening performance of bülow, a German-Canadian pop singer who charmed the room with her heavy instrumentation and sweet vocals. Her soft voice contrasted the power of her two songs, titled “You & Jennifer” and “Don’t Break His Heart.”

Following this opening act, Gray dramatically appeared on a platform with the sharp flash of light and launched into his hit “Wish You Were Sober.” The dance beats continued with “Telepath,” but then quickly transitioned into the more melancholy tone Gray is famous for with “Comfort Crowd” and “Astronomy.”

Rather than focus on choreography to engage the audience, Gray relied on subtle sways and gestures that brought an understated elegance to his performance. Gray attempted to connect with every member of the audience from the front row to the back of the concert hall.

Throughout the concert, Gray would stop to ask how the crowd was doing, and he even passed out water to some members of the audience. He also stopped during one of his songs when someone fainted in the audience, and did not resume until he received word that she was all right.

In between songs, Gray also made an effort to read every sign that was held up, and he even sang “Happy Birthday” to a fan whose friends had held up a sign celebrating her. This friendly attitude towards the crowd evoked a sense of community between all his fans who were standing close together and belting out the same lyrics in unison.

After months of restrictions due to the COVID-19 pandemic, a concert like this was a refreshing taste of life a few years ago. Especially since the bulk of his music was released since the beginning of the pandemic, with Kid Krow having been released on March 20, 2020, hearing it live felt like coming full circle. The music that kept me company through the past few years was right in front of me all of a sudden, with a crowd who felt the exact same all around.

As his set progressed, the synchronicity of the audience grew more apparent. During the heartbreaking “The Story,” iPhone flashlights swayed throughout the concert hall, and the screaming of the chorus of “Fight or Flight” matched perfectly with Gray’s.

The light design further matched Gray’s performance. At every dance beat, the strobe hit Gray and his set precisely to the tempo, and at every sad song, the backing lights faded in and out with shades of blues and purples. The spotlight hit its mark every time, and the produced silhouette when Gray sang on the raised platform only added to the commanding presence he had on stage.

Despite the packed venue and resulting heat, Gray captured the hearts of the entire crowd and gave them a shared experience enhanced by the friendliness of everyone there. Groups frequently turned to dance with one another and one person’s chants often echoed back and forth among those of others.

Gray proved that a show on its own is memorable, but a show that unites a crowd is unforgettable.

Emily Smith is a first-year in the college. Sounds of the District appears online and in print every other week.