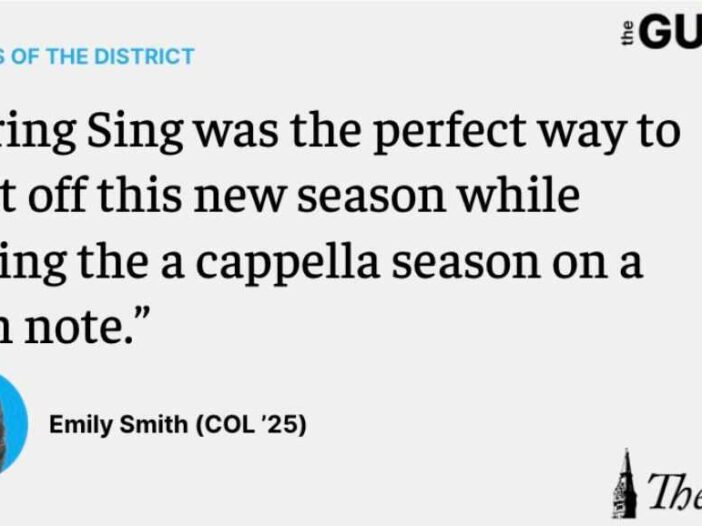 Just days before Easter break, Georgetown’s a cappella community celebrated the warming weather with their annual Spring Sing Showcase, co-hosted by Superfood and The Saxatones.

The April 10 showcase featured six a cappella groups: the Georgetown Chimes, The Capital G’s, The Phantoms, The GraceNotes, Superfood and the Saxatones. Each group performed a set of three songs, with selections ranging from the classic “Danny Boy” to more modern hits such as “Teenage Dream.” The showcase featured both vocal and emotional range and kept the audience of Gaston Hall, packed with Georgetown students and family members, engaged for the entirety of the show.

Dressed in the springtime whites, purples and oranges, the groups lit up the stage with powerful vocals. Reactions were lively and varied: The Saxatones’ rendition of Alicia Keys’ “Fallin’” resulted in booming cheers from the audience, while Superfood’s performance of Taylor Swift’s “Don’t Blame Me” had everyone dancing in their seats. On the other hand, the Chimes’ solemn “Danny Boy” left the hall dead silent in awe until the end of the tune.

The skillful arrangements of these pieces particularly stood out. The lead vocals were stunning with their intricate harmonies and the beatboxers of every group formed the backbone of the songs with their impeccable volume and consistency. The harmonies and crescendos in “Erase Me” and “Zombie” were just as, if not more, astounding than the main vocals. Every group kept in perfect unison and maintained a balance that was easy to overlook because it blended together so well.

At the last a cappella showcase February 25 and 26, The Cherry Tree Massacre, the groups seemed a bit shaky on stage due to the pandemic’s cancellation of prior live performances. However, at Spring Sing, the groups came into their own and mastered Gaston Hall with enthusiasm and confidence.

Not only did the groups provide musical entertainment, but they also ensured their sets were visually appealing, with coordinated outfits and passionate movement from both soloists and the background singers. Their enthusiasm spread to the crowd, who felt their spirit and became even more invested in the show.

Between the performances, jokes from host DJ Outler (COL ‘22) and heartwarming senior recognitions, the two-hour show flew by. The showcase flowed perfectly with a professional polish and was an exemplary display of the Georgetown a cappella community’s talent.

As the cherry blossoms bloom and snow begins to feel like a distant memory, Georgetown students are coming out of their hibernation and recovering from the somberness of winter. Spring Sing was the perfect way to start off this new season while ending the a cappella season on a high note.

Emily Smith is a first-year in the College. Sounds of the District appears online and in-print every other week.