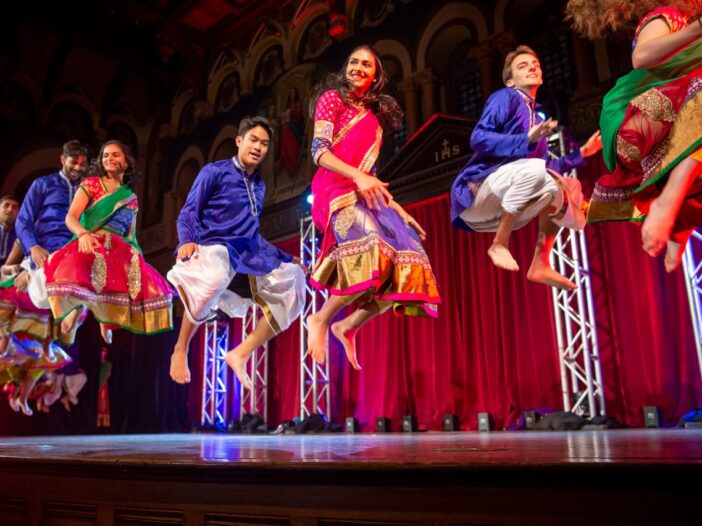 Following months of preparation, nearly 350 students gathered to perform an array of South Asian dances to a sold-out Gaston Hall on April 22 and 23, raising at least $20,000 for charity. “Rangila” is Hindi for “color,” a reference to the colorful costumes that dancers wear as they perform dances from countries including India and Sri Lanka.

The name alluded to how this year, Rangila focused on rebuilding internal knowledge of the tradition among students and organizers, according to Rangila co-Coordinator Sanjana Malla (COL ’22).

“For this Rangila, the main purpose of it was to bring Rangila out of its two-year hiatus and reset that institutional memory, which I don’t think previous Rangilas had to do,” Malla told The Hoya. “We did revive Rangila back to the same height that it was.”

Because the class of 2022 was the only remaining class that had helped organize Rangila in the past, there was a risk that if Rangila did not happen this year, no one would know how to organize it in the future, according to Syona Hariharan (SFS ’22), one of Rangila’s three coordinators.

“The stakes were high,” Hariharan told The Hoya. “It was a challenge for us because there was no institutional knowledge.”

The relative lack of institutional knowledge among the organizers was also reflected among Georgetown’s broader community. Typically, around 700 students sign up for about 350 existing spots, Hariharan said. This year, only around 400 students signed up, which was likely because fewer Georgetown students knew about Rangila this year than in previous years, according to Hariharan.

For many months, it looked like Rangila would not happen this year at all, according to Hariharan. Because of the pandemic, Hariharan said holding Rangila in the fall, when the show is typically held, was not possible, and it wasn’t until mid-January that Georgetown’s South Asian Society, which oversees Rangila, found out that the showcase could take place in April.

That condensed a typical preparation period of about seven months into only three months, but Hariharan said it was all worth it.

“That might have been the coolest thing I’ve ever done. I’m really proud of the work we did to bring it back,” Hariharan said. “I wish I could do it again. I would do it every year if I could.”

Cate Walter (COL ’25), who has a background in ballet, attended the show and said the performance was very clean, something she said is hard to achieve with such a large group and with dancers who don’t have much dance experience.

“I feel like I have a more critical eye as a dancer, and I was still really impressed by all of the pieces,” Walter said. “All of the movement was super different from everything that I’m used to, but I actually definitely want to do it next year.”

Walter said the performance differed from the more formal, noninteractive ballet shows she is used to watching.

“Right from the beginning, there was a lot of cheering and yelling in support of all the dancers and it made it a very lively and fun atmosphere that engaged the audience very well, which I really enjoyed,” Walter told The Hoya. “That was probably my favorite part of it.”

Since the performance was held virtually and raised only a few thousand dollars, Rangila decided to partner with Edu-GIRLS again this year, according to Tewari.

“We really like Edu-GIRLS’ mission,” Tewari told The Hoya. “Instead of just throwing a lot of money at a general cause, they really invest a lot of money specifically in a handful of girls and make sure that their lives fundamentally change for the better.”

The money that Rangila raised this year will support Edu-GIRLS’ Reach For The Stars Scholarship Program, which will cover all expenses for girls to study engineering at top colleges in India. It costs $1,000 to cover the yearly expenses for one girl.

Rangila coordinators are still tallying the total amount of funds raised, but Tewari said they raised at least $20,000 of their $30,000 goal.

The scholarship program specifically targets girls who come from poor backgrounds, according to Edu-GIRLS Founder and Chair Anand Seth.

“Rangila will provide us with much needed resources to extend the RfS program to exciting careers in medicine, law and public administration in 2022,” Seth wrote in an email to The Hoya. “We are grateful to the Georgetown University South Asia Club for choosing to help EduGIRLS take the REACH FOR THE STARS program to new heights.”

Malla said this performance was different from others she has done, as it combined her passion for dance with a focus on philanthropy.

“It was especially important to me because dance is something that I’ve been passionate about since I was little,” Malla said. “Using dance as the outlet to raise so much money for an organization that does so much for girls around the world is really special.”

Malla said emotions among the organizers and performers were running high, especially at the end of the second show.

“I broke out in tears because I was so proud of how the show came together,” Malla said. “It’s something that meant a lot to all of us, and just doing it with your best friends by your side made it all the better.”