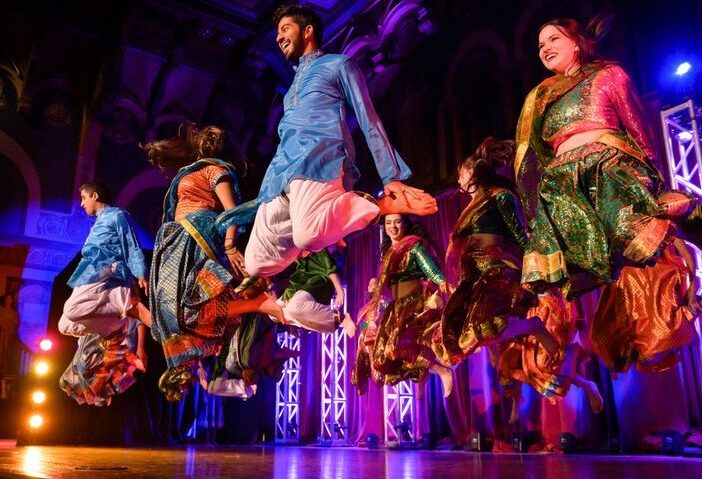 Rangila, Georgetown University’s annual South Asian dance showcase for charity, celebrated its 28th year of performances with the theme “Growing the Roots,” paying homage to the rich history and culture of the South Asian diaspora while raising over $25,000 for a charity that supports underprivileged communities overseas.

The Nov. 18 and 19 performances included pieces influenced by numerous dance and music styles found across the Indian subcontinent. Rangila is a months-long effort of the GU South Asian Society (SAS) and the larger South Asian community at Georgetown to honor heritage and celebrate cultural diversity.

Rangila coordinator Ananya Amirthalingam (COL ’23) said she aimed for the theme of this year’s show to emphasize the importance of South Asian representation to the Georgetown community.

“Our theme this year, ‘Growing the Roots,’ reifies our commitment to learning from our heritages and histories while also boldly welcoming change and transformation,” Amirthalingam wrote to The Hoya. “’Rangila: Growing the Roots embodies personal growth from individually honoring our roots and communal growth, as we move towards consciously prioritizing diversity and broader representation of the South Asian diaspora.”

Over 350 student dancers and choreographers participated in this year’s performance, according to Amirthalingam.

As a philanthropic showcase, the organization selects a philanthropic partner to raise money and awareness for each year. The Rangila philanthropy board selected Distressed Children and Infants International (DCI), an organization that provides support to underprivileged communities in India, Nepal, Bangladesh and Nicaragua through educational support, health care, eye care and other projects.

Komal Samrow (SFS ’25), director of internal outreach for Rangila’s philanthropy board, said the board chose to support DCI because of its dedication to service in vulnerable South Asian communities.

“In selecting a philanthropic organization to partner with this year, we really wanted to select an organization that embodied Georgetown’s emphasis on service, especially for marginalized populations — a key focus of DCI’s work,” Samrow wrote to The Hoya. “We also looked for an organization that serves throughout South Asia, as a testament to the diversity of our South Asian community here at Georgetown.”

Before the show, the Rangila team held several other philanthropic events on and off campus to support DCI, according to Samrow. In addition to fundraisers at Chipotle and Crepeaway on Nov. 2 and Sep. 29 respectively, the Rangila team sold custom candles and wooden roses that audience members could gift to dancers and choreographers. Rangila also collaborated with other Georgetown student organizations, including GU Bubble, to sell chai boba at the GU Farmers Market and The Corp to sell specialty food and drink items at their storefronts.

Samrow said that while these efforts were successful on the fundraising front, it was less effective than the showcase in raising awareness for Rangila’s cause, an equally important goal.

“We hoped to raise at least $25,000 dollars this year, and we are extremely proud to have exceeded that goal by several thousand dollars,” Samrow said. “Beyond the money, however, as a philanthropy board one of our primary aims was to ensure that Rangila’s philanthropic mission was well known and communicated to the community this year.”

The show consisted of ten dances and a musical program called Studio Rangila. Many of the dances featured popular South Asian styles such as Desi Hip Hop, Bharatanatyam and South Indian folk dances, with a twist of hip-hop, modern and Afro-Latinx styles incorporated into the performances, according to the event’s program. This year’s show also included the first Nepali-inspired dance in the show’s history.

SAS President Nikash Harapanahalli (SFS ’24) said they felt it was important for Rangila to offer a complete representation of the breadth and diversity of the South Asian diaspora.

“Those dance styles meant not just taking the heritage of a South Asian past, but breathing it into an innovative and dynamic present to build a more inclusive and representative future,” Harapanahalli told The Hoya. “That future was seen when we heard our first-ever Nepali song and dance on the Gaston stage.”

Harapanahalli said they hope members of the South Asian community at Georgetown walked away from the show feeling proud of their culture and the way it is reflected at the university.