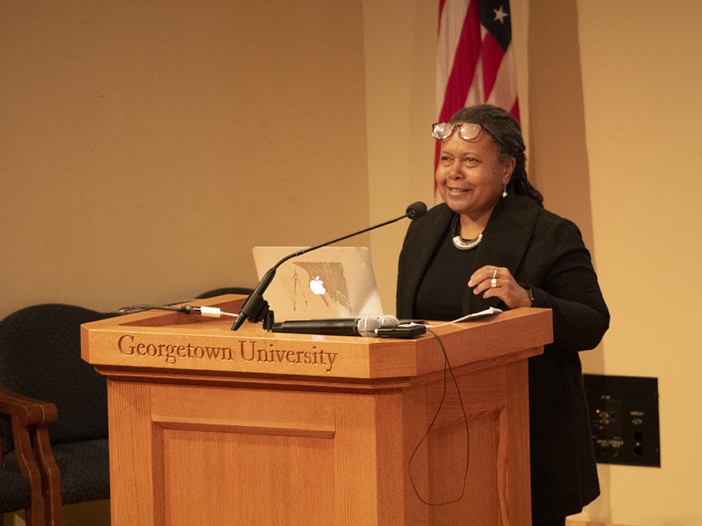 Activists can harness the power of digital media platforms to raise awareness and bolster the goals of black liberation movements, political scientist Cathy Cohen said at a Feb. 20 event.

The event titled “Black Resistance in the Digital Age—From Twitter to Black Queer Feminism” took place in Lohrfink Auditorium. At the event, Cohen reflected on the growth of black resistance movements within the digital realm.

Social media provides a platform for historically silenced and marginalized individuals to freely express themselves, according to Cohen.

“It is a space of previously policed voices; in particular, those of black feminists can be heard,” Cohen said. “The imposition of the politics of respectability is more difficult with spaces with relatively open boundaries.”

The event was sponsored by the Center for Social Justice, the Kalmanovitz Initiative for Labor and the Working Poor, which develops policies and strategies to improve American workers’ lives, multiple academic departments and major and minor programs.

Digital platforms give young black activists a space to unite and rally together against injustice, according to Cohen.

“I want to explore the liberatory and maybe deviant possibilities of politics in the digital space,” Cohen said. “Specifically, I’m interested in how young black people are using digital spaces armed with deep political alienation and the participatory culture to build a new black public sphere where radical black politics, radical black movements might be birthed.”

Platforms like Twitter have allowed movements to gain momentum. The social justice movement Black Lives Matter, which aims to stop violence and systemic racism towards black communities by law enforcement, was birthed on Twitter in 2013 through a trending hashtag. A lack of diversity among Oscar nominees was highlighted by the 2015 #OscarsSoWhite hashtag, created by activist April Reign.

Information can be spread more effectively via digital platforms than traditional media sources, which increases the effectiveness of liberation movements, according to Cohen.

“These sites, which highlight content which focus primarily on issues impacting black communities, may now constitute an online black counterpublic that has the potential to provide a space for political discourse and action that allows us to fight for black liberation,” Cohen said.

Cohen is a professor at The University of Chicago where she served as the chair of the department of political science and director of the Center for the Study of Race, Politics and Culture. Her work primarily focuses on the study of post-civil rights movement black politics and social movements.

Over the past decade, black digital media outlets like Blavity and The Root have emerged. These online publications primarily cover and offer perspectives on issues affecting black communities.

Open digital platforms, however, still offer more equitable coverage for activists than these black media outlets because digital platforms are free from bureaucracy and editorial restrictions, according to Cohen.

“Even black media sources, whose mission of uplift and respectful visibility was decidedly different from the mainstream press, were hierarchy-structured with editors making final decisions with who and how black people would be represented,” Cohen said.

Cohen’s work in political activism includes serving as a founding board member of the New York-based Audre Lorde Project, an organization which serves LGBTQ people of color. Cohen has also written two books: “The Boundaries of Blackness: AIDS and the Breakdown of Black Politics” and “Democracy Remixed: Black Youth and the Future of American Politics.”

Digital media offers powerful tools for movement building, but the true transformative capabilities lie within the activists themselves, according to Cohen.