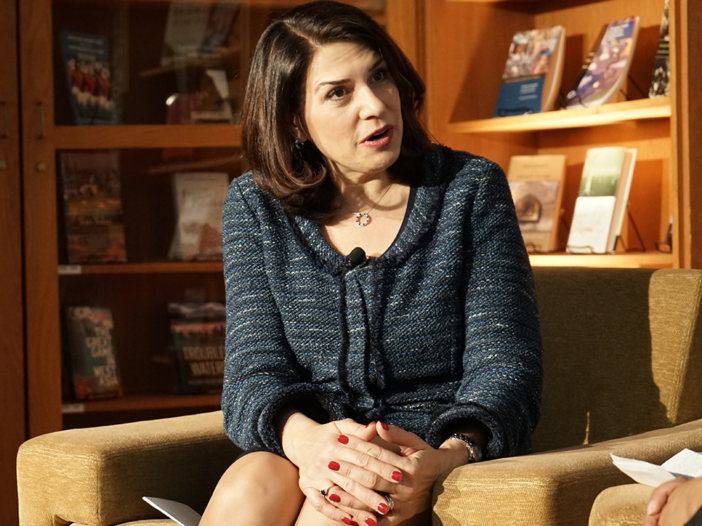 The United States Department of State has made strides toward cultivating a representative workforce for public servants in recent years, Deputy Director of the Foreign Service Institute of the U.S. Department of State Julieta Valls Noyes said at a Thursday event.

Noyes discussed the need for diversity and inclusion in foreign policy and challenges faced by her and other minorities in pursuing work in diplomacy at the event titled “Talk With Ambassador Julieta Valls Noyes – Deputy Director, Foreign Service Institute.” Noyes has spent more than three decades in the Foreign Service, a career that has spanned assignments in five different countries.

Despite progress in workforce representation in recent years, the State Department still has room to improve regarding diversity, Noyes said.

“Where we’re not as well represented is in the more senior ranks because, of course, it takes up time for people to move up,” Noyes said. “Slowly, slowly, steadily, steadily, we hope to get to a more equitable service.”

Noyes cited the Rangel Program, a State Department initiative started in 2002 administered by Howard University that seeks to attract people from minority groups that are historically underrepresented for careers in the Foreign Service, as a key factor in the department’s increasing diversity. Since the Rangel Program’s start, representation of minorities in the State Department has increased by about 25% and representation of women in Foreign Service generalist officer positions has increased by 12%, according to Noyes.

As a woman of color in the Foreign Service, Noyes sometimes felt that she could not adequately express her opinions to her superiors and peers, she said.

“There have been times I’m not going to lie where I felt like it was probably more prudent to keep my opinions to myself or where I felt like if I did voice my opinions, they would fall on fallow ground,” Noyes said. “There have been other times where I expressed my opinion even with some trepidation that it wouldn’t be well received, and there have been some times where my opinion has been strongly solicited and strongly guanted and so it really did depend on the issue on the situation who I was engaging with how urgent the matter was what particular experience I brought to the table.”

Before becoming the deputy director of the Foreign Service Institute at the State Department, Noyes served as the U.S. Ambassador to the Republic of Croatia. Prior to that, she managed relations with twelve countries in Western Europe and the European Union as the deputy assistant secretary for the Bureau of European and Eurasian Affairs from 2013-2015.

In the discussion hosted  by the Institute for the Study of Diplomacy as part of its Diverse Diplomacy Leaders Speaker Series, Noyes also discussed her journey to joining the foreign service and the ways a profession in diplomacy has enriched her life.

Noyes decided that she wanted to join the Foreign Service when she was 15 years old because of her experiences growing up as a child of immigrants, she said. Noyes’s parents immigrated to the United States from Cuba as refugees shortly before her birth, an experience she said sparked her desire to serve her country.

“We grew up with a profound sense of gratitude to this country for taking in our family and for giving them an opportunity to make a new start,” Noyes said.

Noyes, who met her husband on the day she took the oral exam to become a Foreign Service officer, spent part of her childhood in Brazil where her father was assigned while working for The International Business Machines Corporation.

During that time, Noyes became friends with other American children whose parents were stationed in the country working for the U.S. Foreign Service.

“I started learning about what their parents did and it was just a very attractive lifestyle I already was enjoying living overseas, learning new cultures and cuisines,” Noyes said.

Noyes joined the Foreign Service immediately after graduating college and was grateful for the opportunity to give back to the country that helped her family.

“It really was destiny, I think, and it was such a magnificent opportunity to repay this wonderful country for everything that it did for my family and for the family of so many other refugees and new arrivals,” Noyes said. “It is something that we remain profoundly grateful for to this day.”