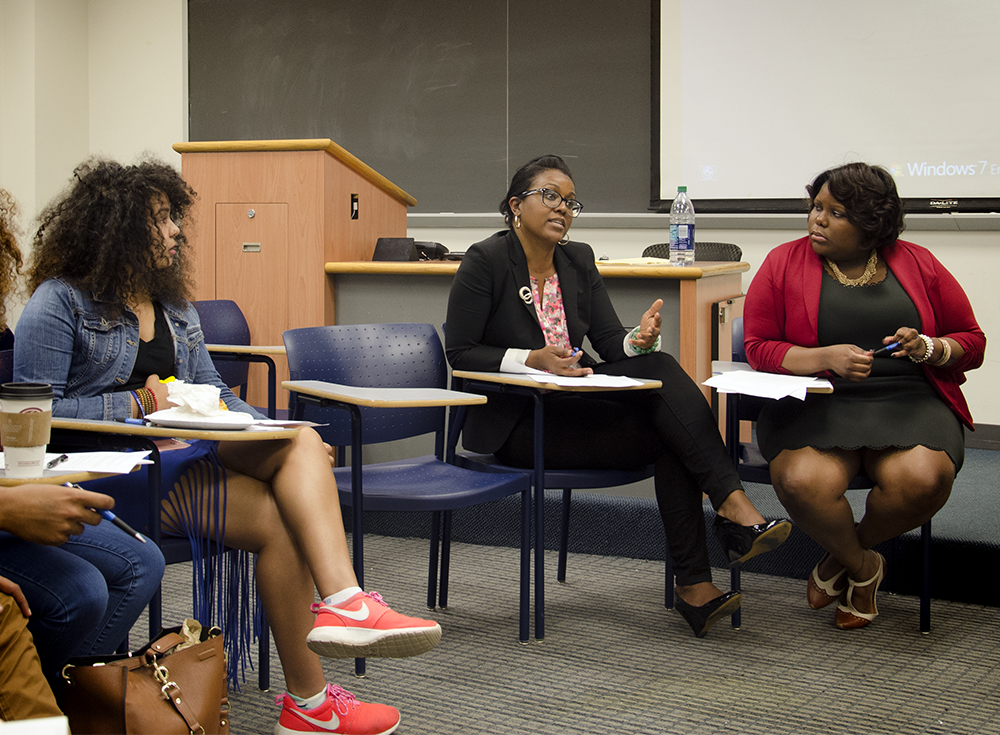 The conversation covered stigmas, stereotypes and statistics relating to intimate-partner violence. Participants were asked to formulate their own definition of the phenomenon and determine in groups whether different statements about the issue were true or false.

Wiggins explained that students typically adhere to an overly narrow definition of intimate-partner violence, neglecting to envision nonromantic relationships such as parents, siblings or roommates as offenders.

“There are times when parents engage in violence with their children, but I don’t think we look at it as an intimate partner,” Wiggins said. “When you feel like your roommate is being manipulative or causing emotional distress, that’s intimate-partner violence. It doesn’t necessarily mean you have to be romantic with them; it just means someone who you’re intimate with emotionally.”

Shirley said the relationship children witness between their parents has the deepest ramifications on later incidences of intimate-partner violence, as men from violent homes are three times as likely to abuse their partners than men without violent parents.

“So often, as we develop, those other relationships like marriage and romantic partnerships are important to think about in terms of what we saw as children, and how that impacted relations with other people, because our relationships really start on day one with our parents,” Shirley said.

The discussion focused primarily on the prevalence of intimate-partner violence in the United States, where domestic violence serves as the leading cause of injury among women aged 15 to 44, according to the panelists.

According to Wiggins, as many as one-third of high school- and college-aged people experience violence when dating; physical abuse is as common among this cohort as it is among married couples.

Wiggins also said while media portrayals tie people of color to violence, abuse in relationships encompasses all races and classes. However, a gendered divide does exist. Ninety percent of known survivors are women abused by their male partners.

Wiggins said she accepts the limitations of these statistics. She attributes warped expectations of masculinity, skepticism about police involvement and reluctance to revisit trauma as key deterrents to reporting violence, especially among male survivors.

“There’s a shame and a guilt in saying ‘I was weak’ because we are conditioned to think that men are about being strong,” Wiggins said. “To get to the point where you report a crime, it has to be significant, especially when thinking about reporting structures and systems with police — even someone who is being emotionally abused, that’s a tough case to try and prove to an officer where they’re going to write a report that could go to court.”

Wiggins said in addition to the physical and psychological toll of abuse, offenders sometimes exploit financial insecurities to trap their partners.

“If your partner is financially abusing you, how are you going to visit your mom or your friends if they live in another city? Who is going to pay for the ticket?” Wiggins said. “If they don’t want me to go, how do I get to the person who might be my biggest supporter?”

“It’s a pretty small campus, so you’re going to stick out if you are perceived as bad-mouthing someone else. Like you’re probably in the same social circles, and even if you’re not, they’re going to be overlapping,” Endale said. “It’s a huge weight put on you and you are going to have to retell everything that’s happened to you.”

Stephanie Estevez (COL ’16) argued that Georgetown’s past handling of sexual assault survivor Willa Murphy, who was forced to withdraw from Georgetown last year and sparked the social media movement #IStandWithWilla after her viewpoint in The Hoya, may dissuade other survivors from accessing resources.

“I think people are scared at the fact that the university may do nothing, or if they do it would be detrimental to you,” Estevez said. “In the Willa case that happened last summer, I remember reading that all over how pretty much she was kicked out of the school, and that just made me wonder if you were in a situation like that, whether you would always want to come forward.”

Helen Alemayehu (COL ’16) said the event allowed her to understand dimensions of intimate partner violence she had not considered before.

“I think for me, I struggle between the difference between stereotypes and facts because in these situations you have to consider who reports and who doesn’t,” Alemayehu said. “Figuring out the realities of the issue is very difficult, especially when you look at it through financial abuse or nonromantic partners, because that’s not typically what you hear about.”