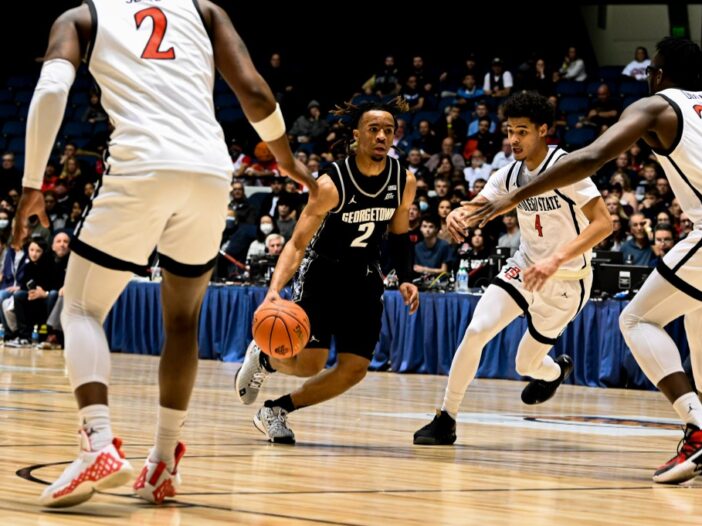 On Thanksgiving evening, the Georgetown men’s basketball team lost to the San Diego State Aztecs 56-73 in the first round of the annual Paycom Wooden Legacy tournament in Anaheim, Calif. The Hoyas stayed close with the top 50 team in the nation for the majority of the game. However, the Aztecs’ stifling defense held the Hoyas without a field goal for the last 9:39 of the game, securing San Diego State the victory.

Both teams scored on their first two offensive possessions in what proved to be a fast-paced game in the second-ever matchup of the two distant schools. Early in the first half, Georgetown’s (3-3) junior center Timothy Ighoefe fell into foul trouble, a recurring issue for the veteran big man. Ighoefe’s two fouls in the first three minutes allowed San Diego State (5-2) to score at will in the paint against Georgetown’s inexperienced reserve bigs.

Despite their early disadvantage in the frontcourt, the Hoyas hung close through the first half, thanks in large part to the offensive prowess of sophomore guard Dante Harris and first-year guard Aminu Mohammed. Harris and Mohammed combined to score Georgetown’s first 21 points of the game and give the Hoyas a 21-17 lead with 9:46 remaining in the first half. Harris was especially aggressive from midrange, shooting 7-11 from the field for 16 first-half points, topping his earlier season high of 14 total points.

Despite Harris and Mohammed’s outstanding start, the Aztecs provided an answer to every Georgetown run. San Diego State’s guard Matt Bradley, referred to by ESPN announcers as “one of the most skilled scorers in the country,” was a powerhouse for the Aztecs, pouring in 11 of his team-high 18 points in the first half. The lefty sharpshooter’s midrange jumper propelled a 7-0 run to give San Diego State a 33-28 lead with approximately three minutes remaining in the first half, a lead the Aztecs would hold for the remainder of the game.

At the half’s close, San Diego State’s Adam Seiko launched a miraculous 3-point buzzer-beater that bounced high off the back rim and through the net to give the Aztecs a 40-32 lead and fuel the team’s momentum heading into the first half break.

Georgetown appeared poised for a comeback bid coming out of the intermission, led by a 7-0 run, including four of Mohammed’s game-high 20 points, to make it a 5-point game with 17 minutes remaining. However, the Aztecs utilized a 10-0 run of their own led by a layup and two 3-pointers from guard Lamont Butler. San Diego State’s Aguek Arop’s empathetic highlight-reel put-back dunk over two Hoya defenders capped off the run, giving the Aztecs a 15-point lead at 54-39.

Just when it seemed like San Diego State had all of the momentum, graduate guard Donald Carey found first-year forward Jalin Billingsley on a fast break alley-oop dunk, sparking an 8-0 run midway through the second half. The run was capped off by Mohammed’s spinning layup, cutting the Aztec lead to just 4 points.

However, San Diego State Head Coach Brian Dutcher asked the referee to review Mohammed’s layup for a potential offensive foul after it appeared Mohammed elbowed an Aztec defender during his spin. The referees obliged, stopping the game with 9:39 remaining to review the play. Despite not ultimately issuing an offensive foul, the stoppage halted all of Georgetown’s newfound momentum and allowed a rattled San Diego State team to regroup.

Coming out of the stoppage, Georgetown did not score another field goal over the final nine minutes of the game. San Diego State’s forward Keshad Johnson’s fastbreak windmill dunk energized the Aztec fans en route to a 14-3 San Diego State run to finish the game.

Of note for the Hoyas, sophomore forward Collin Holloway saw his first action of the season playing eight minutes as he returned from a foot injury.