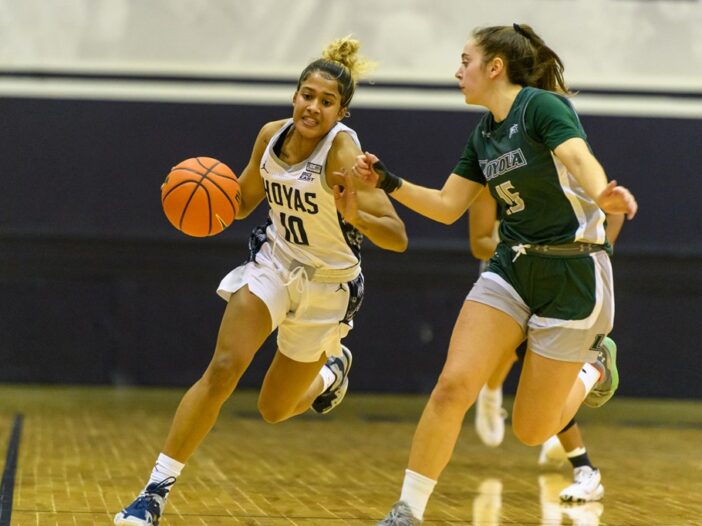 After suffering back-to-back losses at home, Georgetown women’s basketball made a powerful statement, never giving up its early lead en route to a commanding 66-55 win over Loyola University of Maryland.

The Hoyas (3-3) tainted their five-game home slate at McDonough Arena with consecutive losses — first to a sharpshooting Davidson squad and then to a tough Columbia unit in double overtime. On Nov. 24 against the Greyhounds (2-5), however, Georgetown’s varied scoring attack and aggressive, trap-heavy defense proved to be a recipe for success.

After giving up a 3-pointer on the game’s opening possession, the Hoyas spurred their offensive attack with an and-one layup from sophomore guard Kelsey Ransom. Georgetown’s guard tandem of Ransom and fellow sophomore guard Yasmine Ott then found graduate forward Milan Bolden-Morris for consecutive 3-pointers.

On defense, the Hoyas focused on denying Loyola a presence inside the paint. Still, five different Greyhounds scored in the first ten minutes, and Georgetown held a narrow 16-11 lead entering the next period.

The second quarter featured a two-sided scoring drought caused by strong defense from both the Hoyas and the Greyhounds. Following an exchange of 3-pointers, neither team was able to score for nearly five minutes. Both offenses committed several sloppy turnovers, but a Ransom steal with just 3:50 left in the quarter finally led to a wide-open layup for Ott. The Hoyas charged into halftime with a decisive 25-16 lead.

Fresh from the break, Loyola’s offense revolved around guard Taleah Dixon, who quickly knocked down two free throws, an open 3-pointer, a midrange jump shot and a layup. Dixon’s scoring spree brought the Greyhounds in striking range for the first time since the first quarter. On an and-one opportunity, Dixon, who averages 12.7 points per game, drilled the free throw to put Loyola only 4 points shy of the Hoyas.

Georgetown, tested for the first time all game, responded with a run of its own. An offensive rebound from first-year forward Brianna Scott led to an easy 2 points for senior forward Shanniah Wright. Bolden-Morris then took advantage of a sleeping Loyola defense to convert a layup of her own. Shortly after, a 3-pointer and free throw from graduate guards Mary Clougherty and Kaylin West, respectively, gave the Hoyas a double-digit lead.

Apart from Dixon, the Greyhounds shot just 2-for-7 from the field in the third quarter, hindering their drive to catch up. The Hoyas’ defense, otherwise prone to giving up open 3-point opportunities, remained strong. Georgetown kicked off the final quarter leading by 7 points.

Georgetown expanded its lead in the fourth quarter. Scott, who had her strongest performance all season, hit a 3-pointer early in the period. The Hoyas continued crashing the defensive glass, moving the ball around and attacking Loyola’s ball handlers, securing a critical win against a weaker Loyola squad.

Bolden-Morris led both teams in scoring with 21 points. After shooting an uncharacteristically low 22.6% from beyond the arc last season, she is off to a career year. Her teammates continued finding her for open opportunities, and she drilled five of her eight 3-point attempts. The sharpshooter who transferred from Boston College last semester has kept the Hoyas’ offense afloat, which is now shooting 35.8% from deep.

While Bolden-Morris was Georgetown’s top performer, there were other promising signs for the Hoyas too. Scott arguably had the best game of her young career, scoring nine points on perfect shooting from the field. At 6 feet 4 inches, she towered over the Loyola bigs inside the paint, but it was her confident 3-pointer that iced the game in the fourth quarter. She did, however, pick up four fouls in limited minutes.

Ransom also continues to blossom in her sophomore year. She tallied 15 points with five rebounds, five assists and a pair of steals. Ransom’s defensive intensity is what makes much of Georgetown’s half-court trap defense successful, and, in combination with her ball security on offense, contributed to her being named to the Big East All-Freshman Team last season.

Big East conference play is coming, and the Hoyas must find their identity on the court in order to be competitive. Before the Hoyas’ first conference game, however, they finished off their home stretch on Tuesday, falling 47-49 to the Temple Owls (4-3).