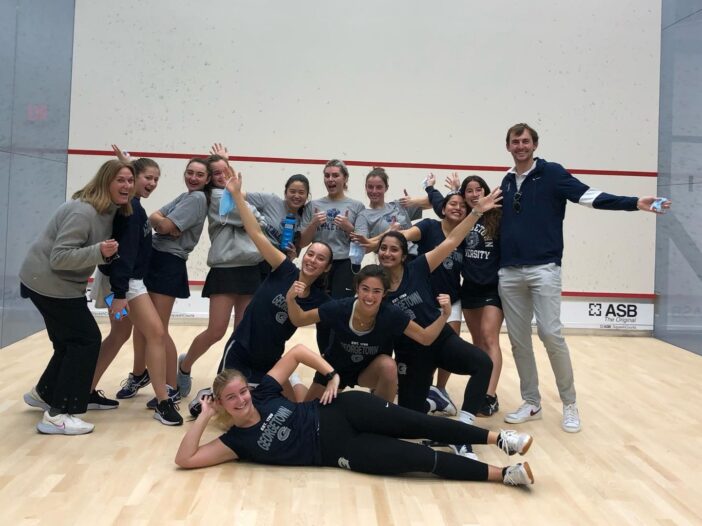 No. 27 Georgetown (2-0) has had a long journey to get to its first collegiate varsity performances. The Hoyas were the top-ranked club team in the nation in 2019-20 and planned to transform the program into a varsity-level team. However, the COVID-19 pandemic forced Georgetown to hold off on any such transformation until the university reopened in 2021.

Georgetown hired a head coach for the program in August 2021, Tim Lasusa. Lasusa has an impressive track record as both an athlete and a coach. He has played on the Professional Squash Association World Tour and Squash Doubles Association Pro Tour, reaching the quarterfinals of the U.S. Singles National Championship in 2017.

As an assistant coach, Lasusa most recently helped both the men’s and women’s squash teams at Yale reach a top-five and top-three finish in the College Squash Association Rankings in 2019 and 2020, respectively.

Since Lasusa’s hiring, the team has moved at breakneck pace to prepare for competition at the highest level of collegiate squash, and it seems their hard work has paid off. The Hoyas’ roster includes nine returning club players from the highly ranked team and an additional six new players.

Lasusa said the team was thrilled to start its season this past weekend.

“College Squash has been put on hold for over a year, but everyone is excited to see its return,” Lasusa said in a statement in October. “For us, it is perfect timing as it’s the start of a new beginning and we look to make an impact in our first year. The squash world is excited to see us compete and I know the team is chomping at the bit to get out there.”

On Saturday, the Hoyas took on the No. 26 Haverford University Black Squirrels (1-1) for the first match in program history. The teams were ranked just one spot apart in the College Squash Association’s preseason poll at No. 26 and No. 27, suggesting close competition.

However, from the top to the bottom seed, Georgetown’s players defeated each of their opponents, pulling off a definitive sweep. The Hoyas won eight out of their nine individual matches with overwhelming victories of 3-0, including the top three flights played by graduate student Zuha Nahir, senior Nina Thomas and sophomore Caroline Wilcox. Junior Nicole Cariño won in four sets in the fourth spot.

Sunday proved to be a bit more competitive for the Hoyas, although they still handily defeated the No. 28 Denison University Big Red (1-3). Georgetown lost the two top flights in hard-fought, close matches, with Thomas taking her opponent into five games that were won by no more than 3 points each and lasted 47 minutes in total.

The Hoyas proved victorious in the third to ninth seed matchups, starting with a dominant win by Wilcox after a close first round. Notably, fourth seed senior Grace Feagin held her own in a five-round match, showing her endurance throughout her 30-minute match. In addition, senior Minna Holleck at the eight spot came back from a 11-6 defeat in the first round to win her next three rounds and secure a win over her opponent.

After the team’s performance over the weekend, Coach Tim Lasusa said he admired the efforts put forth by the team and the victorious outcome.

“I’m very proud of how the team competed this weekend,” Lasusa said in a postgame statement. “We had some tough matches today, but the team battled hard, competed well and we’re looking to carry it moving forward.”

The Hoyas’ next outing will take place the weekend of Dec. 4 to 5 as they take on No. 9 Virginia, No. 11 Dartmouth, No. 18 Franklin & Marshall and unranked Richmond in Charlottesville, Va.