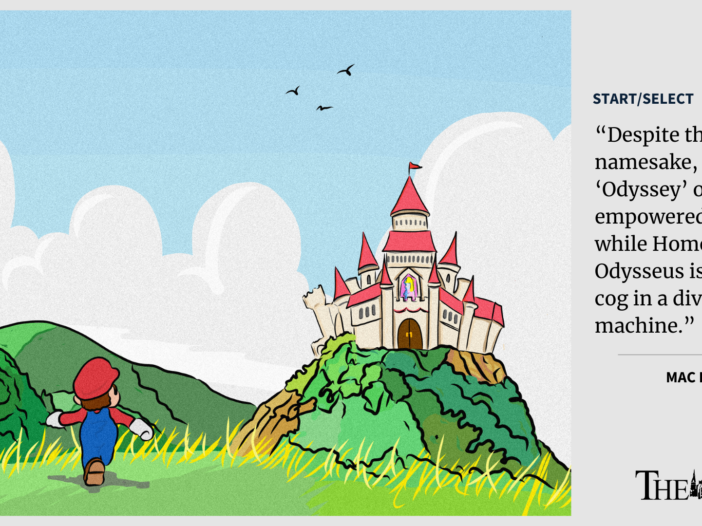 “Jump Up, Super Star!,” the main theme song of “Super Mario Odyssey,” promises the player “freedom like you never knew.” Indeed, freedom is the foundation “Odyssey” is built upon. Its controls, its gameplay and even its cosmetic options give the player freedom and agency. In countless ways, “Odyssey” is a far cry from the fairly linear sidescroller from which Mario claims his humble origins.

It is ironic that the game’s namesake should represent such a different artistic viewpoint. The original Ὀδυσσεία, one of the oldest and most important works of Western storytelling, is an ancient Greek epic poem. Homer’s “Odyssey,” like the Mario title, tells the story of a man’s quest to reunite with his beloved and the obstacles he must surmount to do so.

Whereas Nintendo’s “Odyssey” emphasizes freedom, in form and content alike, Homer’s original tale depicts a fatalistic world where the lives of its heroes are governed by omnipotent divine forces. The two works mirror each other across millennia, and their commonalities impart a broader message about the very nature of art.

“Super Mario Odyssey” released for the Nintendo Switch in 2017 with a bang. The classic Mario games never fail to top the charts, and these 3D platformer entries still hold a rarified place in the minds of gamers. Audiences adore these titles for their polished, fluid movement controls as they guide Mario with ease and flair through inventive worlds. These games possess some of the finest level designs and snappiest pacing to be found in the gaming world.

“Super Mario Odyssey” exemplifies just what makes those titles tick, and the game internalizes these ideas as a core design philosophy. 3D Mario games are delightful because of the freedom they allow players in ambulating Mario. The Switch is such a resounding success because it shatters the concept of consoles being restricted to the home. “Odyssey” is imbued with this same radical freedom.

From the outset of the game, Mario’s controllers are free to explore the finely crafted hub worlds of “Odyssey” at their leisure. The game’s new capture mechanism also allows the player to control the game’s diverse cast of enemies. Every new critter brings its own unique moveset, each fleshed out and fun enough to warrant new games in their own right. The world is the player’s oyster.

Homer’s “Odyssey” is a horse of a different color in terms of the reasoning behind its fame. The metrical mastery at play in its text and the complex themes it puts forth, which speak on human nature and Greek society, are no less impressive today than nearly 3,000 years ago.

Still, this “Odyssey” is in many ways antithetical to freedom. It was produced by a strictly class- and gender-divided mindset and imagines a world where the efforts of the most clever hero are constantly thwarted by beings beyond his ken.

Odysseus, returning home from the brutal sack of Troy, is denied his νόστος — his homecoming — by a series of capricious gods and monsters set on his destruction. He is held captive, hypnotised and forced to disguise his true identity. Despite their shared namesake, Nintendo’s “Odyssey” offers a fully empowered agent, while Homer’s Odysseus is merely a cog in a divine machine.

Still, it would be naive to end the discussion there and herald Mario as the pinnacle of art and mankind’s evolution toward a freer future. The form of Homer’s “Odyssey” embodies freedom in a way Nintendo’s does not. The poem itself is an amalgam of preexisting myths and songs, adapted and sewn together in one clever composition. Homer’s “Odyssey” could not have existed without this deep imaginative freedom. Compare this work to Mario’s latest adventure, which, despite its novelty, is retreading the same plot the series has put forth since 1985.

Taking a step back to understand how these two worlds speak to each other gives us a deeper appreciation of each work. They reveal shifting values and customs in our artistic pursuits and undoubtedly show a greater modern preoccupation with the individual person. But they also reveal our commonalities in making art, even across a time gap of thousands of years. Each piece shows the things that have always been important to humanity: perseverance, justice and, most importantly, freedom.
“Super Mario Odyssey” is a fun game, and in many ways, it is deeply profound. And I can’t shake the feeling Homer might just agree.