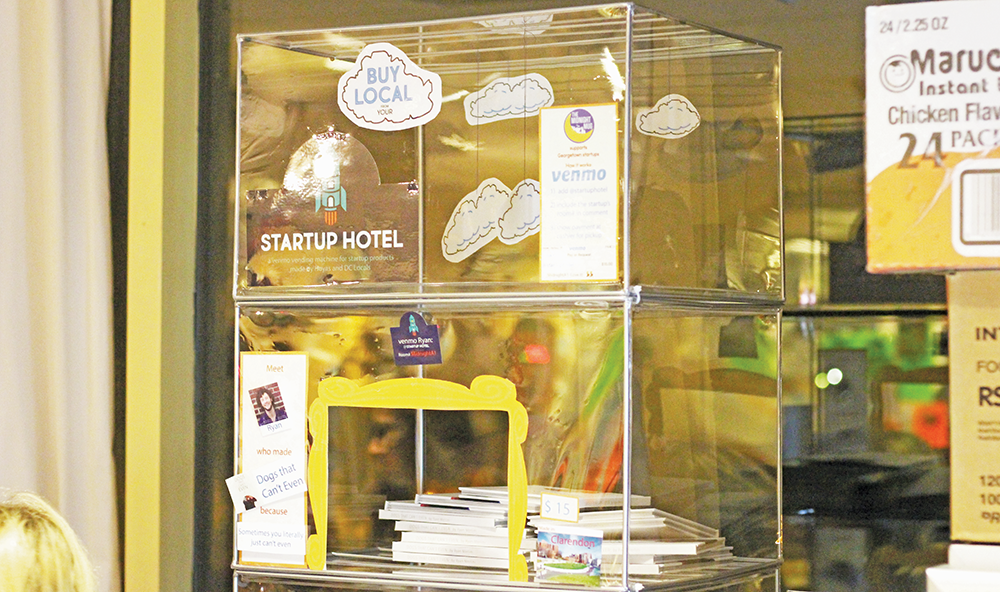 Startup Hotel, an installation in Lauinger Library, is giving aspiring entrepreneurs a new opportunity to show off their startup projects.

The about 8-foot-tall translucent tower with shelves holding the products opened in mid-October in Midnight MUG, a Students of Georgetown, Inc. storefront on the second floor and first floors of Lauinger in the Maker Hub of the Gelardin New Media Center.

Georgetown alumnus Ryan Merlini (COL ’14) created the Startup Hotel to encourage student entrepreneurship. The project serves as a space for students to display and sell their invented products, which Merlini said can be a significant obstacle for startups in their early stages.

“When you first make something, it is really hard to get it out into the market. You either have to know somebody that is well-connected or has a big network and big box stores,” Merlini said. “There’s really no quick connection from local community, local D.C. product to a retail space.”

Items currently on sale in the Startup Hotel include are iPhone breathalyzers, miniature succulent plants and Merlini’s own project, a book entitled “Dogs That Can’t Even,” which features photos of apparently exasperated dogs.

Merlini oversees all the projects that receive spaces in the Startup Hotel and decides which ones make it to the shelves based on an application process. As interest increases, Merlini said he hopes that products will share the space on a rotating schedule to display a broader range of projects and give more opportunities to local and student entrepreneurs.

“The goal is to make space for local products, sort of inspire the same love and drive that people have around farmers markets around startups,” Merlini said.

Another Startup Hotel is set to be installed in Saxbys coffee shop, which is also slated to feature new products. U Apparel, an athletic clothing company founded by Ethan Rosen (MSB ’19), and Helping Hand Journal Series, activism-themed journals, that donatesome of the proceeds to social justice groups, are planned to be on sale at the upcoming installation in Saxbys.

The Journals’ co-founders Noah Martin (COL ’17, GRD ’19) and Jesse Flores (COL ’16) heard of the Startup Hotel and got in touch with Merlini through the Gelardin New Media Center and the Maker Hub.

Sonja Erchak (COL ’18), the director of Midnight MUG, said that though the project has only been in Midnight MUG for a few weeks, it has garnered significant attention.

“On all of my shifts and every time I’m in the store, I see people checking it out,” Erchak said. “When you tell people there’s a Startup Hotel, they don’t really know what you’re talking about. I think the curiosity of the name has been a big selling point.”

Erchak said she felt strongly about the being able to boost entrepreneurship at Georgetown as a member of Corp leadership.

“The financial component isn’t as significant as what it represents in our community, which is just that I think everyone on campus is constantly looking for a space to get their voice out there, get their passion projects out there, and that’s really important for me to be able to provide that for people,” Erchak said.

Merlini hopes his project can help students learn more about the financial and logistical resources available to them, adding that Georgetown has become a more supportive place for student startups over the last few years.

“When I was here in 2014, there was no way to sell anything you made before going to Red Square, and it made it impossible because you needed to have the time to sit out,” Merlini said. “I was extremely surprised at the entrepreneurial infrastructure that’s been built. Now there’s some serious funding; if you have an idea you’re able to get it started.”