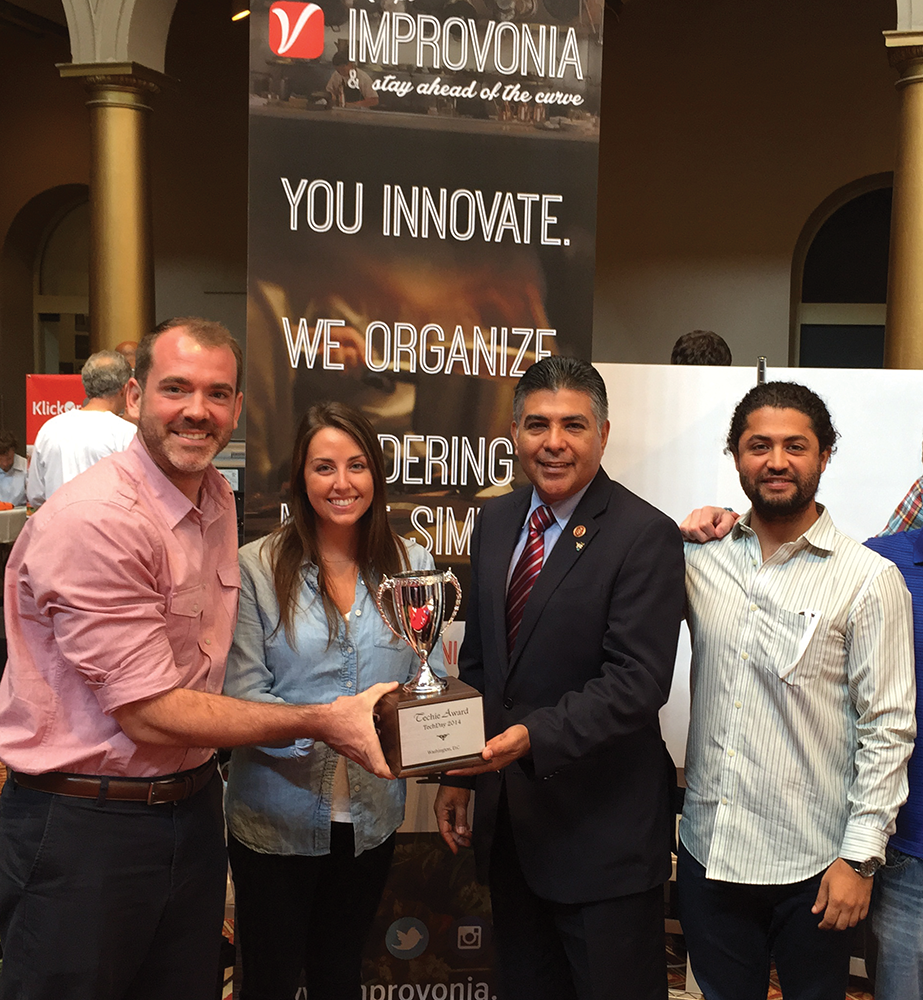 A successful startup company will identify both a daily problem and the solution — and that’s exactly what Improvonia, an app created by Georgetown MBA alumni Konstantin Zvereff-Akiiki (GRD ’11) and Jagmohal Bansal (GRD ’11), has done for the restaurant industry.

Born from an MBA operations class group project that tasked students with performing a case study on a real business, Zvereff-Akiiki and Bansal chose to analyze Sweetgreen and, from this analysis, noticed the starting inefficiencies of the supply ordering process.

“The current process involved hard-to-hear late-night phone calls, blurry faxes and choppy voicemails,” Zvereff-Akiiki said, describing how the process was inefficient and difficult for both restaurants and suppliers, who have many different clients with varied needs.

Not only was the concept of Improvonia well received by their professor, Zvereff-Akiiki and Bansal pitched the idea at multiple Hoya Entrepreneurship Initiative competitions and won them all. Following their success at Georgetown, the co-founders represented the MSB at the international Stu Clark Investment Competition in Manitoba, Canada as the first-ever team from Georgetown. Despite not winning the investment competition, the founders continued building their concept and formally founded Improvonia.

Launched in July 2014 and funded only by the generosity and trust of family and friends, Improvonia anticipated business with 16 restaurants in the Washington, D.C. metro area in the first three months. Improvonia instantly met with success, attracting over 150 restaurants and their suppliers within those same three months.

“Right now we are just trying to keep up with demand and opening accounts,” Zvereff-Akiiki said. “The D.C. restaurant community is a very tight-knit community and we are rapidly spreading through it.”

Because of its rapid success, Improvonia was named the “Best Unfunded Startup” at D.C. Tech Day, held Oct. 2 at the National Building Museum. Improvonia was commended for its explosive growth and huge potential going forward in a wide-open market. The startup is now gearing up for its first major round of financing in November.

“We plan on expanding throughout the East Coast, first in New York, Baltimore and Philadelphia, and then we will see from there,” Zvereff-Akiiki said.“We currently have a lot of demand in New York from suppliers there; they know about Improvonia and want to set up their accounts with us before we even launch in the city. We really want to finalize our presence in the market; we want to make sure everyone knows we exist.”

Improvonia is completely free for restaurants, which contributes an additional incentive to join, as well as streamlining the process of ordering by providing an online database of suppliers.

“Restaurants can access our entire database of suppliers and make electronic orders with them,” Zvereff-Akiiki said. “We are not enabling price competition and we never will. We are opening sales channels for restaurants and their suppliers and making it easier and more efficient for everyone.”

Furthermore, the Improvonia platform also caters to the eating local movement by allowing restaurants to search for suppliers within a certain distance, even going as specific as local and hyperlocal, so that restaurants only see suppliers that are actually in their area. Not only does this system ease the process of inventory management for restaurants, it also makes the selling process for suppliers extremely efficient.

“Improvonia is enhancing restaurant vendors’ operations so much that they are giving us all of their accounts and are pressuring their restaurants into joining the platform so that their business transactions are more efficient and less costly,” Zvereff-Akiiki said.

Businesses have responded very positively to the enhancement.

“As a chef, I know how frantic it can be working in the kitchen. Improvonia has created an efficient way to improve the relationship between restaurants and suppliers,” Gianluigi Dellaccio, chef and president of Dolci Gelati, said.

“We need as many hands on deck as possible; we are always hiring and we have a lot of internships available, especially for Georgetown students. We are happy Improvonia has been so successful. When something works it works and that is what is getting people excited,” Zvereff-Akiiki said.