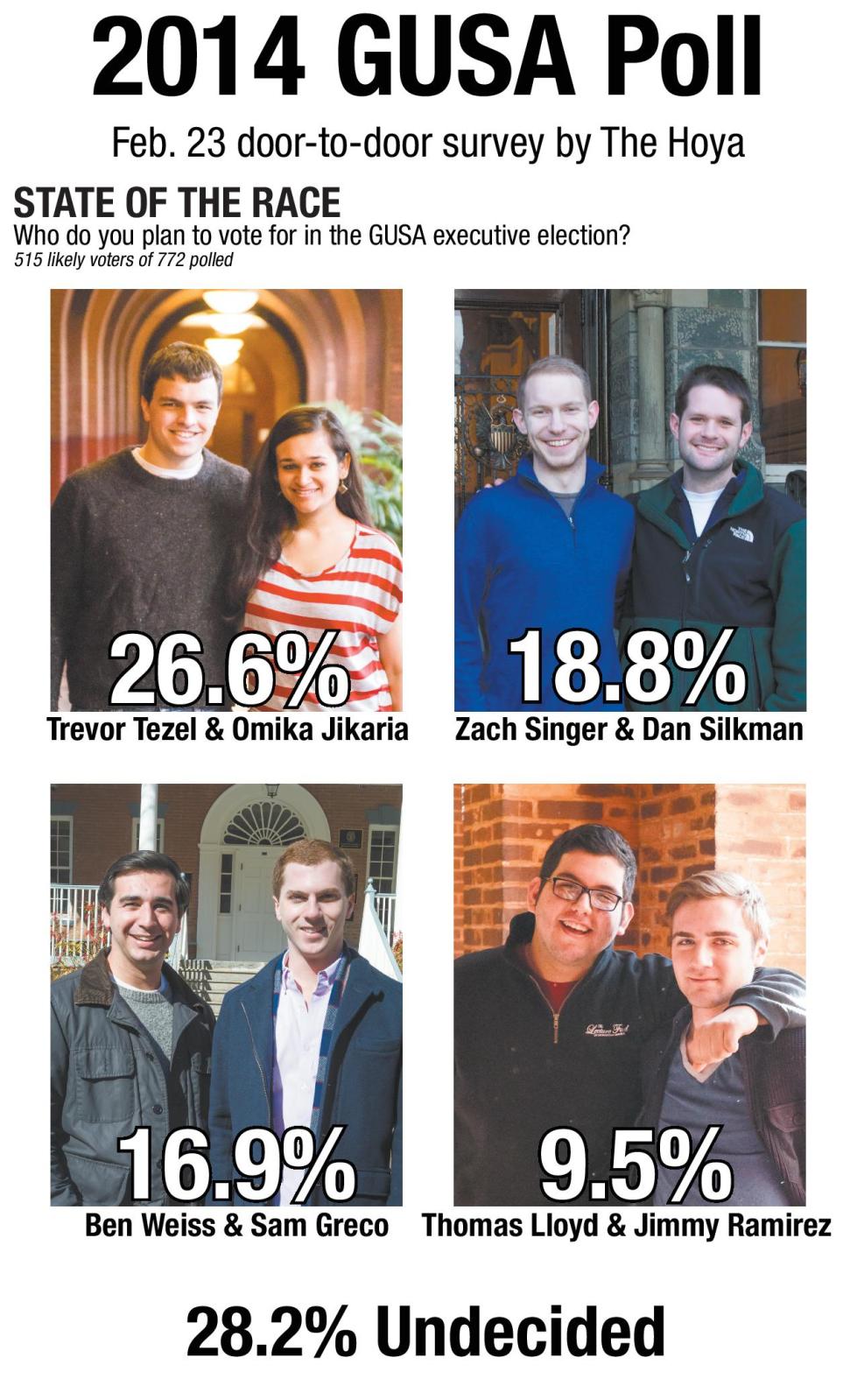 Trevor Tezel (SFS ’15) and Omika Jikaria (SFS ’15) are in the lead in the race for GUSA executive, with 26.6 percent of likely voters choosing their ticket, according to a door-to-door poll conducted by The Hoya on Sunday evening.

The poll sampled 772 students, 515 of whom identified as likely voters, and from whom this data was drawn. Of these 515 likely voters, 168 were freshmen, 151 were sophomores, 118 were juniors and 78 were seniors.

“These numbers are encouraging and show that our message is really starting to resonate with Georgetown students,” Tezel said. “That being said, it’s clear that we’re going to have to move full steam ahead. This is going to be an incredibly close election.”

“The fact that Trevor’s in first is to be expected; he’s been running for the longest amount of time and of all the candidates has the most ingrained support,” Singer said. “The fact that we’re pretty close shows that there are a lot of great candidates out there talking about the issues.”

“I think that comes from the good presence Dan and I have built over two and a half years on campus. Talking to a lot of people, this was a pretty good team we’re putting together — respect for that, respect for the ticket we can bring together, that’s where the frontrunner status comes from,” Singer said. “As GUSA chief of staff, I think it comes with the territory as well. We’ll see how that plays out — now people have seen our name for a while, and hopefully it’ll turn into votes.”

Tezel suspected Singer’s status as the perceived frontrunner stemmed from his platform.

“I think that probably speaks to the platform from which Zach and Dan are running. They’re certainly trying to run as the candidate of the GUSA institution of the current administration. That kind of approach might give students that idea,” Tezel said. “However, I’m reassured by these results because it shows that regardless of what students expect the next GUSA administration to look like, they have a very clear idea what they want. What they want is going to be the results we see on election day.”

Weiss was surprised by his own results in this category.

“I’m very surprised we had a high number of people assume we’re the frontrunners,” Weiss said. “I hope over the next few days I can convince a few of those people we are the right choice to lead the student body next year.”

“I think a lot’s been made of Omika being the only woman in the field over the last couple of days. News coverage, it’s painted the other candidates in a light that’s a little different. There’s a lot more women on our campaign team. … It’s not from a lack of women on our team,” Singer said. “With a 10-point spread, I think it’s fair to say there’s a gender gap. Ideally we’d seek to narrow that spread a little bit.”

“I think a breakdown like that might in some ways speak to the effort on the part of our ticket, not just in Omika’s gender, but in the policies we’re supporting and the way we’re going about doing that, so that appeals to female voters,” Tezel said. “I don’t think you could entirely contribute that gender gap to the fact that we have a female on our ticket, while at the same time I don’t think you can ignore that fact.”

Lloyd, who is president of GU Pride, led among voters who identified as LGBTQ, with 36.7 percent of the vote. However, the sample size for this category was small, with only 42 LGBTQ respondents and 30 who identified as likely voters.

“I would expect to be in the first or second choice of the vast majority of LGBTQ folks on campus,” Lloyd said.

Lloyd and Weiss also responded to their respective positions in these results.

“It’s pretty much what I was expecting,” Weiss said. “This is one of the more competitive races I remember. Both Trevor and Omika and Zach and Dan have run incredible campaigns. I’m pretty happy we’re right there with them, from what I can tell.”

“Obviously it’s disappointing to us,” Lloyd said. “On one hand, Jimmy and I were the last ticket to assemble — we had the slowest ground game coming out of the gate. The last few days are the time to turn some of those undecided voters. With The Voice endorsement and my performance in the debate, we look forward to picking off parts of the other tickets in other rounds of voting.” 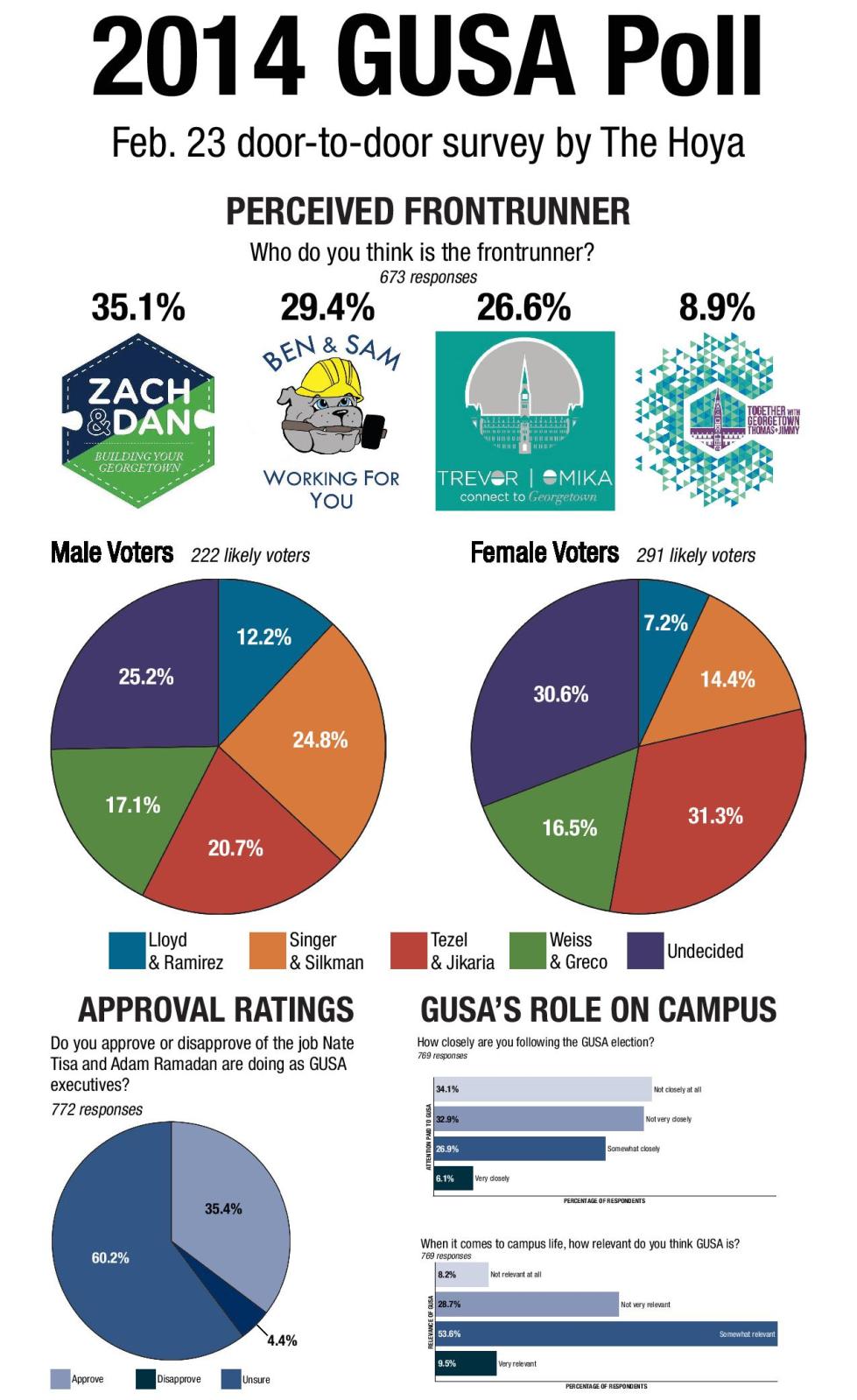