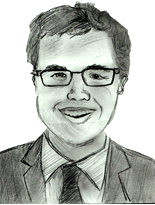 The recent vice-presidential debate was one of the more polarizing events of the past few weeks. Depending on to whom you talked, Vice President Joe Biden’s performance was either phenomenal or atrocious. This sharper-than-normal partisan divide can be explained by Joe Biden’s personality — his quirks are simultaneously his greatest strengths and weaknesses.
Watching these past debates alongside hundreds of other Georgetown students is one of those experiences that I will always remember when I think back to my time on the Hilltop. Not only is there a great sense of camaraderie, but the experience also gives instant feedback about who is winning the debate.
After the first presidential debate, it was clear from the audience’s reaction that Romney had emerged as the victor. By contrast, the more recent vice-presidential debate was in essence a draw.
This conflicted with much of the pre-debate expectations. According to a survey of conducted by the Pew Research Institute, independent voters polled before the debate said — by a 42 percent to 25 percent margin — that Rep. Paul Ryan (R-Wisc.) would defeat Vice President Joe Biden,
With those expectations going into the debate, all Biden had to do was hold off Paul Ryan. Luckily for Democrats, Biden did not just perform better than anticipated, he also arguably more than held his own against his opponent.
While President Obama was too professorial, almost timid, Biden showed a degree of feistiness that was refreshing. He was willing to bring up Romney’s now infamous “47 percent” comment, which the president did not mention at all in the first debate.
In terms of major themes of the debate, the issue of who is to blame for the present economic problems was defining. According to Democrats, the blame should be put on the eight years of President Bush and the huge deficits that he ran up. Republicans such as Ryan counter with that the Obama administration needs to take responsibility and stop blaming its predecessors for the nation’s problems.
Whoever ends up winning this argument with voters will have a significant advantage on Election Day. Even though much of the debate was focused on foreign policy, what most voters are going to determine their votes on is who they think will do the best job managing the economy.
On the issue of the economy, Biden showed his famous Scranton populism, which causes Democrats to rally behind him and Republicans to shun him.
Biden’s at-times-unusual vocabulary was also on display in the debate, as evidenced by his now famous — or, depending on your political persuasion, infamous — use of the word “malarkey.” In spite of the fact that many pundits mock Biden relentlessly, it is refreshing to see a candidate who does not speak like he is aiming to please a perfectly calibrated focus group.
In the end, most pundits have concluded that the debate was a draw, and even CNN’s instant reaction polls showed viewers were evenly split about who won the debate. Biden did a better job than many expected, though Ryan certainly held his own.
All of this makes the upcoming presidential debate even more important. In this next debate, Obama has the chance to turn the momentum of the campaign away from Romney. Looking at Biden’s performance should be part of his preparation.
When asked about his personal character toward the end of the debate, Biden said that he “never says anything that he does not mean.” Over his past four decades in public life, this has been demonstrated time and time again.
It is these quirky features of Biden’s personality that makes him both endearing as well as a target of late-night talk shows. They are both assets and weaknesses. To understand this is to understand why the reaction to the recent debate has been so polarized.

Scott Stirrett is a senior in the School of Foreign Service.