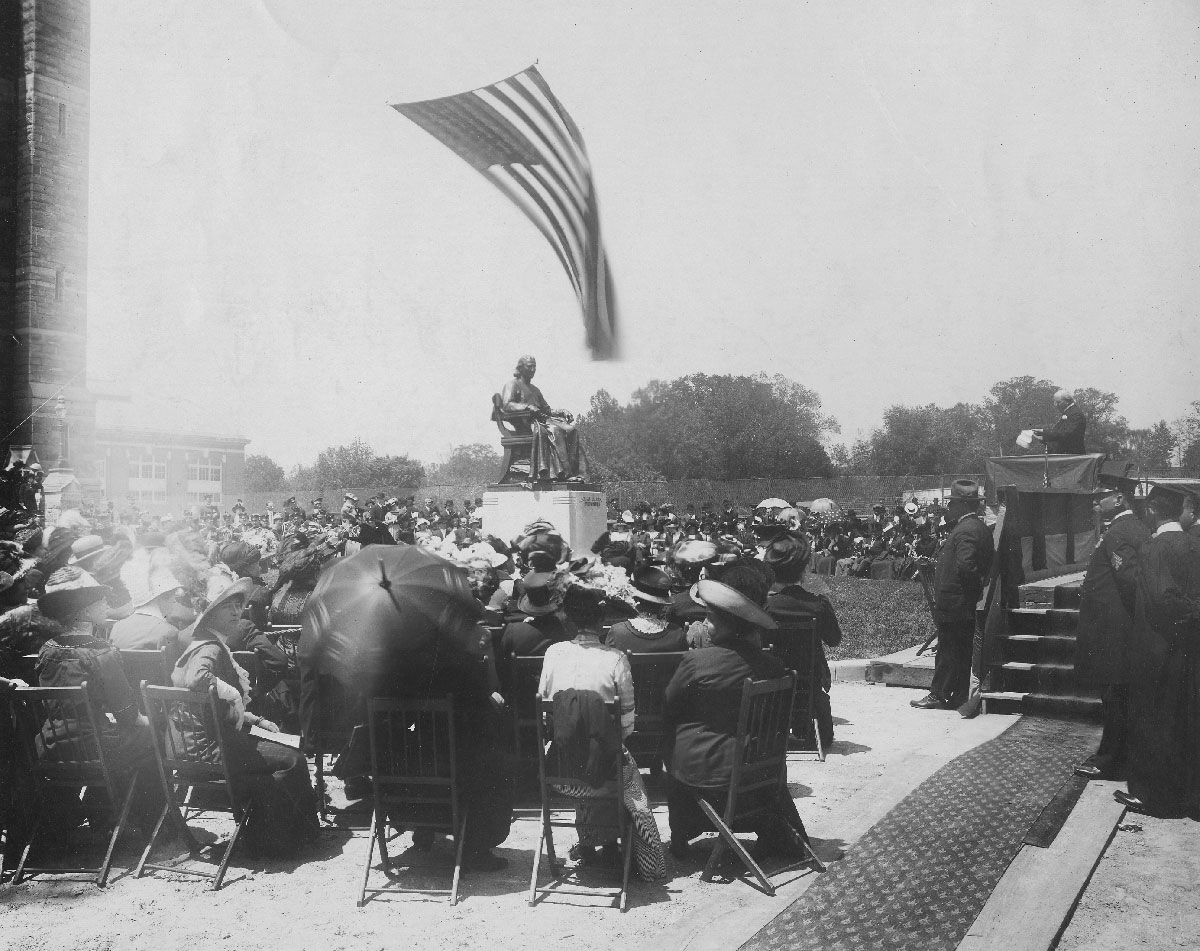 Walking across Georgetown’s campus, it is easy to notice subtle relics of the university’s rich history — statues and memorials are woven between modern buildings and dormitories, occupying an important space in daily student life.

Though dozens of other bronze- and stone-cast figures decorate the Hilltop, few Georgetown students know the actual history or meaning behind them, save the iconic John Carroll statue. Long before students began climbing into Carroll’s lap to pose for photos, there were other traditions and histories whose existences have now been reduced to forgotten marks and faint notes found in old historical archives. But behind each of these oft-unnoticed pieces of art is a story that makes up just part of the university’s history.

The most recent statue to arrive on campus, the St. Joseph with Christ Child statue that stands on Library Walk today is the third iteration to be placed on campus. The statue was created by artist Julia Levitina (COL ’03) and installed Sept. 11.

First made in 1872, the statue was placed in front of what was then an infirmary and now is the Former Jesuit Residence.  According to notes from Fr. Francis Barnum, S.J., in the university archives, shortly after the statue’s placement, the St. Joseph’s Lamp Association was founded. The purpose of the association was to keep a lamp burning before the statue at all times, as it was believed that St. Joseph had protected the university from the various epidemics that had swept through the city before.

Membership in the association was restricted to the senior class, with each member tending to the lamp. The tradition stopped in 1875 when the junior class decided to cultivate a garden around the statue and decorate it with vases and ornaments, and thus the association died.

That is, it was dead until 1918 when Fr. John Creeden, S.J., brought it back following the re-emergence of influenza.

When the statue was damaged in 1987, a new one was placed in front of Healy Hall, where it stayed until it was put on display in the Booth Family Center for Special Collections in 2014. The university commissioned Levitina to create its successor.

“There is definitely an element of disbelief to seeing my work on Georgetown’s Library Walk; to passing by the bronze sculpture I produced, that will endure for up to 30,000 years, on the main campus of my Alma Mater,” Levitina wrote in an email to The Hoya, “As an artist, to be awarded this commission by Georgetown University, the largest job of my career to date, has been a privilege and an honor.”

Levitina typically does all her work by herself in her studio, from mixing the clay to building metal armatures to support her sculptures.

“It is a lengthy, physical and sweaty process that is also extremely satisfying because the result it yields is so personal. There is a certain kind of magic in watching something that was not there before, something that is but few bags of clay powder, oil, petroleum jelly and wax bubbling away in a turkey roaster at its inception, slowly come to life and become a story that tells itself in a form of a bronze sculpture in a public square, in someone’s living room, in someone’s garden, on someone’s kitchen table, completely independent from its creator.” Levitina wrote.

St. Joseph, however, was an exception because of its large mass: The statue is 7 feet tall and 950 pounds.

On January 23, 1909, Rev. John A. Conway, S.J., stood in front of Georgetown alumni at the annual Founder’s Day Banquet and spoke of a dream.

“John Carroll had his dream; it was a great dream, and greatly has it been fulfilled. I, too, have had my dream; it is a small one, and not yet has it been verified,” Conway said. “It is the dream of the statue of the founder of Georgetown College in the vacant niche which has been waiting for it for the past 30 years.”

Rev. Conway’s speech, “A Dream Realized and a Dream Still Unfulfilled,” was met with enthusiastic responses from alumni.

Three years later, on March 4, 1912, the 16-foot statue of the first Roman Catholic bishop in the United States was unveiled. In attendance were some of the country’s most powerful and influential men. Even President William Howard Taft had been scheduled to speak during the dedication ceremony. Unfortunately, he ultimately canceled to attend a memorial service after his close military aide died on the Titanic.

In his place, Attorney General George Wickersham spoke. But the actual bronze John Carroll statue that we now know was not the one that was present during the happenings of that busy weekend. According to university archives, the university had been notified that the statue would not be ready in time, and so in its place they put a plaster cast of the statue and painted it brown, unbeknownst to spectators.

And thus Rev. Conway’s dream, at least in part, was at last fulfilled.

“Georgetown College may be immortal,” Rev. Conway said on that fateful January day in 1909. “I hope and pray that it may be; its founder certainly is.”

Another bronzed figure sits on Georgetown’s campus, this one in the garden just outside of White-Gravenor Hall. It is of an older gentleman who rests on a bench, a chessboard beside him, his legs crossed, a cane in his hand. Though this image of Jan Karski (GRE ’52) is quite reserved, the actual person was anything but — he was a revolu

During World War II, the Polish citizen escaped from a Soviet camp after being taken prisoner from the Polish army, and later joined an underground group to fight Nazi occupation. After being captured by the Gestapo while on a mission, Karski slashed his wrists rather than give up information. He later escaped from the hospital with the help of other members from the underground resistance, according to the United States Holocaust Memorial Museum.

In 1942, Karski snuck in to Warsaw and witnessed Jews being sent off to concentration camps. He then traveled to London to notify British authorities. The following year, he met with President Franklin Roosevelt and petitioned for U.S. action.

Karski remained in the United States after the war, earning his Ph.D. from the School of Foreign Service in 1952, and later becoming a professor at the university in the department of government and international affairs.

Even after establishing himself in the academic world, Karski never forgot about his original plight. He urged for Polish democratization and continued to fight against anti-Semitism until his death.

After Karski’s death in 2000, the university unveiled a statue in his honor. In 2012, President Obama announced that Karski was to be posthumously awarded the Presidential Medal of Freedom.

Repeat cases of vandalism suggest that Karski’s fight against anti-Semitism is one yet to be won. The original statue had a wisp of smoke with both English and Hebrew inscriptions, which was stolen and later replaced with a concrete pillar upon which was a metal plate with the English and Hebrew inscriptions. In July of 2003, Professor James Collins of the history department came onto campus to discover that the statue had been vandalized again, this time with the metal plate having been ripped off.

Collins, who had been an admirer of Karski since he was child, immediately emailed authorities in an email stating, “Today, just an hour ago, I was sickened to encounter a second

incident as awful as the one last November. I encountered another example of what I consider to be outrageous racism, this time in the form of anti-Semitism.” The writings detailing Holocaust efforts had been completely destroyed.

Collins then motioned for the university to host a re-dedication ceremony and replace the original wisp of smoke, but his requests were never met. The plaque was replaced, this time with the inscription only in English.

“I disagreed with the decision, for reasons I outlined back in the day, but I also believe those who chose this solution acted in good faith and I would repeat that our common goal of ending vandalism of the statue of our beloved colleague has been achieved by their solution,” Collins wrote in email to The Hoya. “There are no easy answers in such matters. I made my case, several times, and failed to convince the necessary authorities.  Does it make me a bit sad every time I walk by Prof. Karski? Yes.”

Karski’s statue was vandalized again in 2009. While this time the writings were left intact, the statue was covered in paint.

Years later, the statue remains a reminder of Karski’s immense resilience and contributions both to Georgetown and the international community.

The Prodigal Son: Rabbi White, Reconciliation, and Unity through Interfaith

The life work of Rabbi Harold S. White, Georgetown’s former senior Jewish chaplain, was dedicated to creating community through faith. According to professor Ori Soltes, a professor in the Center for Jewish Civlization, White’s dedication is part of the reason why he commissioned the creation of a statue from the Christian biblical tradition. The Parable of the Prodigal Son statue is outside of the auditorium on the second floor of the Intercultural Center.

“It’s an idea about reconciliation. It’s an idea about how we can make mistakes. It’s about being able to start all over again,” Soltes said. “[White] always had as an important part of what he was interested in was the notion of interfaith relations. He was very much into reconciliation, particularly in the aftermath of events like the Holocaust where that issue in particular with the church and Judaism was so sensitive.”

White was the first full-time Jewish chaplain at a Catholic University in the United States. He passed away in 2015 at the age of 83. He helped launch the Program for Jewish Civilization in 2003, and remained integral in its leading the program, even following his resignation from chaplaincy in 2010.

“Rabbi White’s devotion to our shared values and our mission as a community was unparalleled,” President John DeGioia wrote in a university-wide e-mail following White’s death. “His leadership and vision in creating opportunities for dialogue … helped build the ethos of engagement that characterizes our campus ministry today.”

White’s statue is yet another reminder of the rich, often untold history seen in the statues that line the paths and gardens of Georgetown’s campus. Yet not all of these figures are relics of the path. The statue of St. Joseph, installed less than two weeks ago, reminds passersby that history remains an integral part of the present.

Levitina said that having her installation coincide with the anniversary of 9/11 gave it a transcendent quality.

“[It] brought it all around full circle for me, imbuing the sculpture with the kind of immemorial quality I intended for it to possess,” Levitina wrote.  “Art has the ability to transcend not only its human creator, but also social, historical and cultural constraints of its place and time in order to capture something that is universal to us all: the strife and the triumph of human condition.”