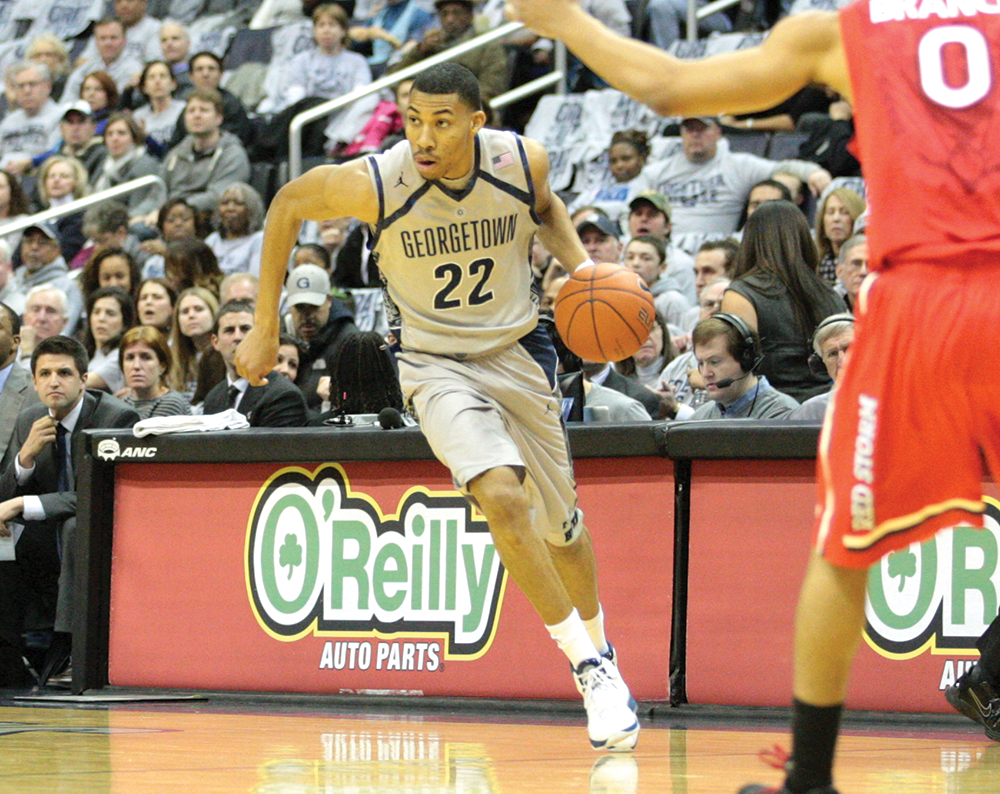 Entering the season unranked, Georgetown exceeded expectations by winning a share of the Big East title and earning a No. 2 seed in the Big Dance. But a first-round loss to 15th-seeded FGCU further cemented the Hoyas’pattern of early exits.

After losing stars Jason Clark, Henry Sims and Hollis Thompson to graduation and hopes of the NBA Draft, Georgetown entered its final season in the old Big East unranked and unheralded. With no seniors and little experience, it was supposed to be a rebuilding year.

Nobody told the Hoyas.

The young team would go on to win a share of the Big East regular season title and earn a No. 2 seed in the NCAA tournament, only to fall to No. 15 Florida Gulf Coast in the first round.

Though the final result was depressingly familiar for Georgetown fans, the ride was as entertaining as any they’ve ever seen.

Georgetown entered the Legends Classic as an unranked team with no real scoring threat. Two close games against supposed pushovers Duquesne and Liberty cast even more doubt on the Hoyas, who won each by single digits.

The Hoyas jumped out to a 41-39 halftime lead to the surprise of everyone in Brooklyn — except for the boys in gray. Georgetown increased its lead in the second half and held on to win a closer game than the eight-point difference would indicate.

Despite a solid win over a legitimate top-15 team, Georgetown showed some flaws in the process that would plague the team throughout the year. Head Coach John Thompson III gave only seven players serious minutes and received poor play from Mikael Hopkins, whose six points and three rebounds were largely offset by five fouls and four turnovers.

Still, Porter began his bid as an All-American, and Starks showed the potential to be a go-to scoring option on a team that desperately needed one.

With all the confidence in the world, the Hoyas took on No. 1 Indiana the following day. Playing from behind all game, Georgetown closed a seven-point deficit with just over a minute to play, tying the game in the final seconds. In the final two minutes, Starks hit two clutch threes and Porter added one of his own in addition to the game-tying layup.

Overtime, however, was all Hoosiers: Senior guard Jordan Hulls and senior forward Christian Watford did damage from beyond the arc, and eventual All-American Victor Oladipo put the finishing touches on an 82-72 Indiana victory.

The message was clear: These young Hoyas were ready to play.

After fumbling to start conference play with embarrassing losses to Pittsburgh and South Florida, Georgetown regained its footing en route to an 11-game win streak. A dominant defense and a blooming star in Porter had the Hoyas rising into the national spotlight.

After crushing DePaul, Georgetown traveled north for its final game in the Carrier Dome as Syracuse’s conference rival. In a battle of terrific defenses, Georgetown entered the halftime break down two points on the road in front of the largest on-campus basketball crowd in history.

Despite the hostile environment, Porter dominated the game in the second half. He finished with 33 points and carried the Hoyas to a 57-46 victory. It was the lowest point total Syracuse has ever posted in the Carrier Dome.

On March 9, Syracuse came to Verizon Center to end regular season play against Georgetown. Remarkably, Georgetown elevated its defensive game to limit Syracuse to just 39 points, its lowest total ever under Head Coach Jim Boeheim. Syracuse was obviously focused on limiting Porter’s shots — and the plan worked, as Porter finished with just 10 points. But Porter consistently found open guards for easy looks from his spot in the middle of the zone, finishing with seven assists on the day. The backcourt, led by Starks and freshman D’Vauntes Smith-Rivera, took on the bulk of the scoring. With the win, the Blue and Gray won the Big East regular season title and swept the Orange.

But the rivalry wasn’t yet over. As fate would have it, Syracuse and Georgetown met as conference opponents for one final time in the semifinals of the Big East tournament. Only a stage as renowned as Madison Square Garden could play host to the end of such an illustrious rivalry, and only an overtime period could decide the fate of the two teams.

In the end, the Orange snuck out a 58-55 overtime win and denied the Hoyas a chance to beat Syracuse three times in one year — a feat that Georgetown has not accomplished since 1986 — and a shot at the Big East tournament title.

Another year, another lackluster postseason.

Since a Final Four appearance in 2007, each Georgetown team to make the NCAA tournament has met its end against an unheralded double-digit seed. This year, the honor went to little-known Florida Gulf Coast, a high-flying No. 15 seed that shocked the world with a 78-68 win over Georgetown. FGCU went on to the Sweet 16 and garnered national attention before losing to Florida in a bid for the Elite Eight. The Eagles joined the ranks of Ohio, Davidson, Virginia Commonwealth and North Carolina State in an increasingly embarrassing list of low seeds to knock off Georgetown in March.

The game seemed in control early on, but Starks and Porter got into early foul trouble. Thompson pulled them both, which allowed FGCU a chance to prey on the Hoyas’ weak bench with spectacular dunks and lights-out three-point shooting. FGCU went into halftime up 24-22, then shocked the Hoyas with a 54-point second half, nearly matching the season average for Georgetown’s opponents. The Eagles played a full-court game and beat Georgetown in transition, taking the Hoyas out of their customary half-court, methodical offense. It was a tactic employed by NC State in the previous year’s tourney to the same effect.

In the end, the season followed a similar trajectory as in years past: An unranked preseason Hoya team fares well out-of-conference and gains national attention, falters to start Big East play, strings together an impressive win streak heading into the postseason and ultimately falls early in the national tournament.

This year’s Hoyas have a decidedly different feel than any recent Georgetown squad, with a veteran-heavy roster, a seasoned backcourt and a potentially dominant big man in UCLA transfer Josh Smith.

Fans can only hope that the new look results in a new ending.