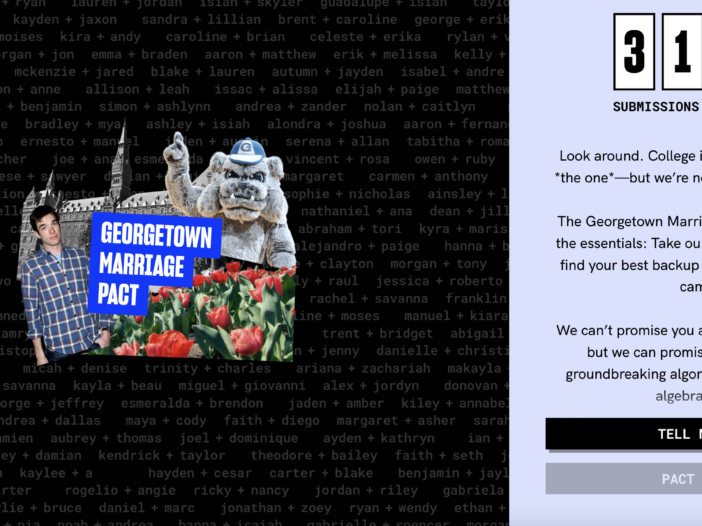 This email would contain the name of another student on campus who they should marry, should they both be single at age 30. After the excruciating wait, at around 9:30 p.m., Caitlin Schwarz (NHS ’26) and her sister opened the email.

The twins matched with each other.

All around campus, similar stories unfolded. Students opened their match emails to find strange matches — friends, ex-lovers and twin flames, literally — all designed by an algorithm.

The Marriage Pact consists of approximately 50 lifestyle and personal questions, and asks students to rank their preferences from “strongly disagree” to “strongly agree.” An algorithm then matches students in terms of long-term compatibility, based on their responses. The results can vary from 99% compatibility to around 65% depending on who fills out the pact in a given year.

“We can’t promise you a match made in heaven, but we can promise a match made via groundbreaking algorithms and a little linear algebra,” the Marriage Pact website reads.

Despite matching with her twin, Schwarz said she was not upset by the fact that she did not get a romantic match.

“I thought it was funny and fun. I would do it again, to see if we would match again,” Schwarz told The Hoya.

Despite almost half of all Georgetown University students participating in the pact, students have mixed emotions about the pact’s success. Some question whether the pact was successful in meeting expectations this year, and others are skeptical of the future direction the organization may be taking following the recent announcement of a new feature.

Match Made in Heaven

Filling out a 10-minute questionnaire seems like a small price to pay for the reward of a soulmate.

Stanford students and co-founders of the Marriage Pact, Liam McGregor and Sophia Sterling-Angus, designed the pact for a market design economics course. Although the pair never intended it to leave the classroom, five years later, the pact now exists on over 70 college campuses across the country.

“The Georgetown Marriage Pact is a special tradition — of course we are fond of it! For the third year, we figured, why not try something a little extra?” McGregor wrote to The Hoya.

The pact, which came to Georgetown’s campus in 2021, has become an exciting, strange and in some cases frustrating event. Last month, about 40% of the student body participated.

To participate, students must fill out a questionnaire asking them to rank their agreement on particular statements on a scale of one to seven. Questions range from political beliefs to long-term relationship goals to how smart students feel compared to their peers.

In an era where more than half of Americans (54%) say that relationships that begin on a dating site or app are just as successful as those that begin in person, the idea of meeting a future partner using an algorithmic matching system seems far from ludicrous.

As a member of the original team that brought the Marriage Pact to Georgetown, Englert said there are a variety of reasons students are motivated to complete the pact: belief in soulmates, hopes of matching with a crush or simply out of curiosity.

“Some people believe in soulmates and some people don’t, but I think everyone kind of has that, ‘Oh I wonder if there is a perfect person for me.’ You never know when you might walk past someone you might fall in love with,” Englert said in an interview with The Hoya.

Sabrina Shaffer (SFS ’25) said she filled out the pact for the second time this year because she had a fun time doing it last year and enjoys the energy it brings to campus.

“I think it’s interesting and it generates buzz. Maybe it could be successful, but I just think it’s kind of a fun thing,” Shaffer told The Hoya.

However, despite some students completing the pact for enjoyment rather than in serious consideration of a long-term partner, the questions seem to get at issues that are genuinely important to students — as if they were looking for a more serious relationship, Shaffer said.

“I think the questions are really good. It’s the best you can kind of do on paper. It can’t measure actual interpersonal interaction, but for just being questions, I think it does a good job,” Shaffer said.

Filling out the Marriage Pact is voluntary, so it makes sense that those who filled it out seem to see value in its presence. However, not everyone feels the same about the concept of “friend matches,” which proved to be a disappointment for some students during the most recent pact.

The Marriage Pact algorithm does not know who students’ friends are, who they have dated in the past, or who they are related to, which leaves all of these options on the table for matches, should they be compatible.

Consequently, many students who filled out the pact with the expectation that they would receive the name of someone with whom they are romantically compatible ended up receiving friend matches that didn’t align with their sexual identity.

Englert said these strange and frustrating matches — such as twin sisters — keep the excitement of the pact alive.

“Part of the drama is part of the fun,” Englert said.

Other students, like Noelle Robinson (COL ’25), said it was disappointing to receive a friend match when the pact promised a potential romantic match.

“I was hoping that I would find my prince charming, and I didn’t necessarily achieve that goal,” Robinson told The Hoya. “I actually knew my match — he lived on my floor.”

“When I got the initials, I was like no way: it is gonna be him. I found out that it was him, and we joked about it. It was a good laugh. We were already friends,” Robinson said.

For instance, Ben Calvert (COL ’24) said he went on a few dates with his 2021 Marriage Pact match, though they never ended up in a long-term relationship.

“I probably would have met her in passing, just like quick intros, but not to the extent that I met her through the Marriage Pact,” Calvert told The Hoya.

For those disappointed by a friend match, a new Marriage Pact feature introduced shortly after the release of initial matches may provide hope for romance.

Following the initial release of matches, the organization sent a follow-up email to students about a new location-based app, which has been met with suspicion.

With the new app Soulmate Radar, if participants consent, Marriage Pact will send them a notification, to which they have four minutes to respond, when they walk past a potential match. This requires students to complete another questionnaire and consent to the pact using location services.

According to Englert, this new feature is the brainchild of McGregor, the original co-creator of the Marriage Pact, and currently Georgetown is the only school where the new feature is available. “We made this beta so it’s only available for people at Georgetown,” the Georgetown Marriage Pact said in an email sent to students who filled out the initial pact.

“Soulmate Radar is cut from similar cloth as the Georgetown Marriage Pact, but it is its own thing, at the end of the day. You can totally participate in one without the other,” McGregor said in the email.

While Englert thinks the new feature has a lot of potential, not all users feel so positive.

For example, Calvert said the app might make interactions awkward rather than authentic.

“It’s just so weird because like you walk by someone and like, you’re just casually strolling down to Lau and then you get a notification that hey, you have four minutes to like try to reach out to this person,” Calvert said.

“I feel like that is definitely an invasion of privacy. I don’t want Marriage Pact knowing my whereabouts,” Robinson said.

The Marriage Pact’s website assures participants their data will not be shared. The website states that they are firmly against advertising and selling users’ data.

“As fourth amendment fans, we care a lot about privacy ourselves — so we designed Soulmate Radar to be as private as possible, from the start,” McGregor said in his email.

However, some students remain skeptical about the tracking aspect.

For instance, Shaffer said tracking her makes her uncomfortable.

Robinson said she was concerned that the new feature is straying from its initial purpose.

“I definitely think the Marriage Pact is becoming too big for their purpose,” Robinson said. “The Marriage Pact is something that people do kind of like either as a joke or to find a lovemate, and I don’t think that the location thing is really going to fulfill either of those things that people use it for.”

Despite students’ irks, Englert said that the pact, regardless of any new apps or programs by the organization, will always maintain relevance to those seeking their special someone.

“If you have a crush on someone, you hope you get them. Here is your way of getting to know someone — and having an excuse to reach out to them,” Englert said.