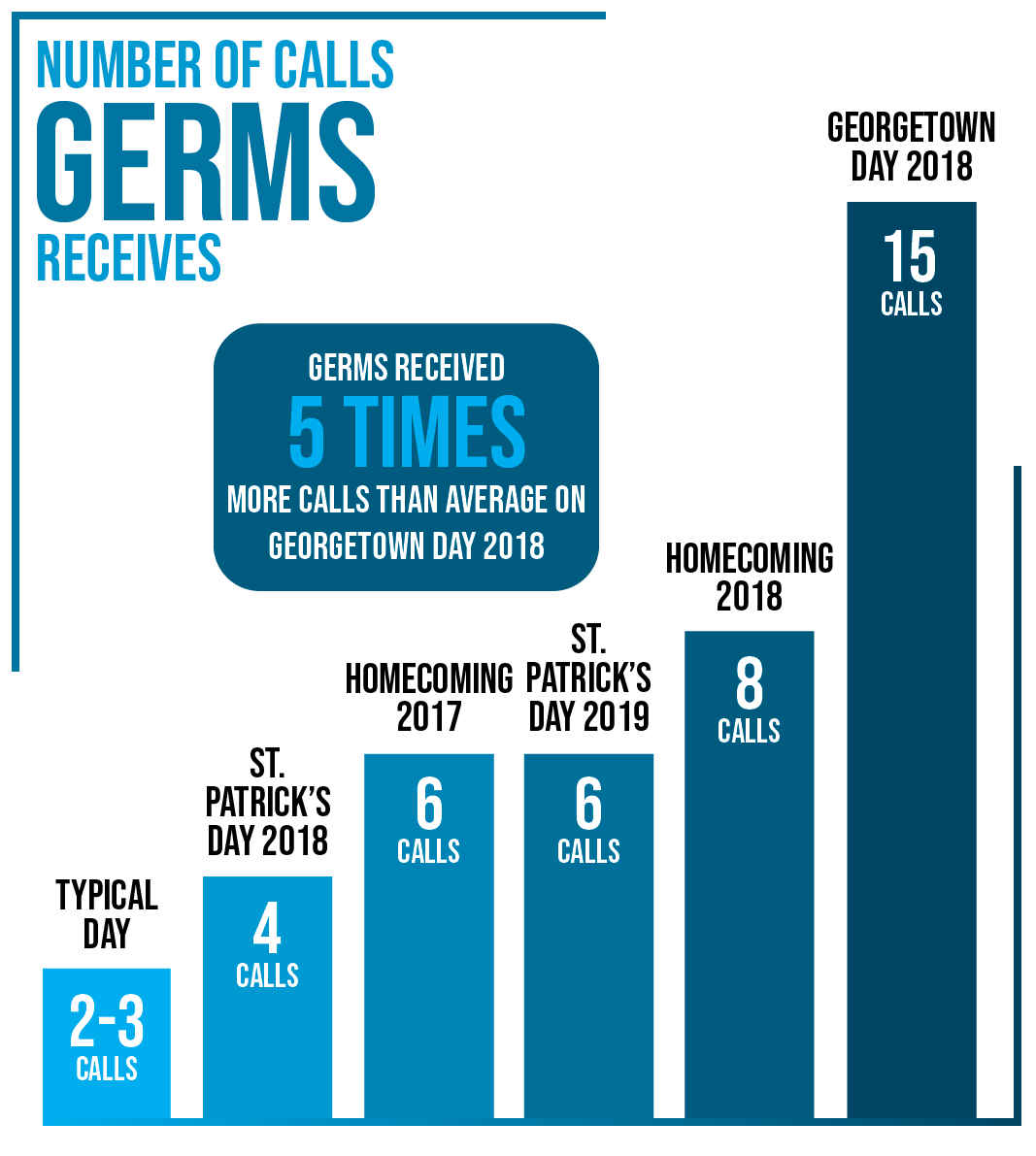 Students face new party-hosting regulations and modified definitions of conduct violations ahead of the 19th annual Georgetown Day, at the same time as the Georgetown Emergency Response Medical Service has seen an above-average number of calls on the holiday in previous years in comparison to typical days.

For the first time, students were required to register parties for the day a week in advance, and party hosts are required to wear a wristband during the event, according to an email sent to LXR Hall residents April 25. The email states that public intoxication can result in the Metropolitan Police Department administering a 61D Field Arrest Citation, a ticket that leads to an arrest on students’ public records.

Students found breaching the Student Code of Conduct from April 26 to 28 will also not have their violations expunged from their disciplinary record unless they complete an additional 15 work sanction hours on top of regularly assigned sanctions — a change from previous university policy, according to university spokesperson Matt Hill. Regularly assigned sanctions vary based on Residential Judicial Council discretion.

Failing to comply with university officials is a violation of the Student Code of Conduct, according to an email sent by Provost Robert Groves, Chief Operations Officer Geoff Chatas (CAS ’85) and Vice President for Student Affairs Todd Olson.

Safety concerns come after an increased number of calls to GERMS on Georgetown Day in recent years. GERMS received approximately five times as many calls on the 2018 Georgetown Day than on an average day, according to GERMS President Brendan Rooney (COL ’20).

“Last year, GERMS received 15 calls on Georgetown Day,” Rooney wrote in an email. “On a typical day, GERMS receives an average of 2 or 3 calls, with a few more than that on weekend nights.”

University and neighborhood authorities will be active on campus throughout Georgetown Day, including the Student Neighborhood Assistance Program teams, the Georgetown University Police Department, MPD and university officials.

Previous regulations failed to deter student misconduct, motivating the implementation of new policies for expunging student records, according to Olson.

“Approach from previous years was not fully effective. Staff are willing to help students who are in trouble,” Olson said in his response to student comments at the town hall. “This is a balancing act and the university is working hard to find that balance.”

Georgetown Day began in 2000 to increase community morale after a series of violent campus incidents, including a student’s death from injuries sustained in an on-campus fight.

For the 2019 iteration, the Georgetown Program Board organized official Georgetown Day events from 6 a.m. to 4 p.m. Such programming has instilled a recommitment to the initial intentions of the event, according to Hunter Estes (SFS ’19), chair of the GPB Georgetown Day Planning Committee.

“GPB is committed to putting on high quality, low cost events that are open to the entire Georgetown community,” Estes wrote in an email to The Hoya. “We have seen a renewed commitment to the original spirit of the day, as we expand the institutional programming that occurs.”

Club-sponsored Georgetown Day events exclude many students from the celebrations, according to former GPB President Zac Schroepfer (MSB ’19), who was not speaking on behalf of GPB.

“Rather than students splitting off into club-based, or organization based social functions, we could focus attention around centralized programming where every Hoya can participate, regardless of identity affiliation,” Schroepfer wrote in an email to The Hoya.

Students should attend official GPB programming open to all students in order to promote a more inclusive community, according to Schroepfer. He recommended that club leaders move their events to later in the day so that students can first attend GPB events.

“The goal of asking students to push parties back was the hope that more student leaders, and members of their clubs, would attend the official programming,” Schroepfer wrote. “By creating this shared experience of a centralized Georgetown Day, we can ensure that every Georgetown Student will feel a part of a community of Hoyas, wherever this programming might take place.”

This article was updated April 28 to include GERMS statistic from previous Georgetown Days.