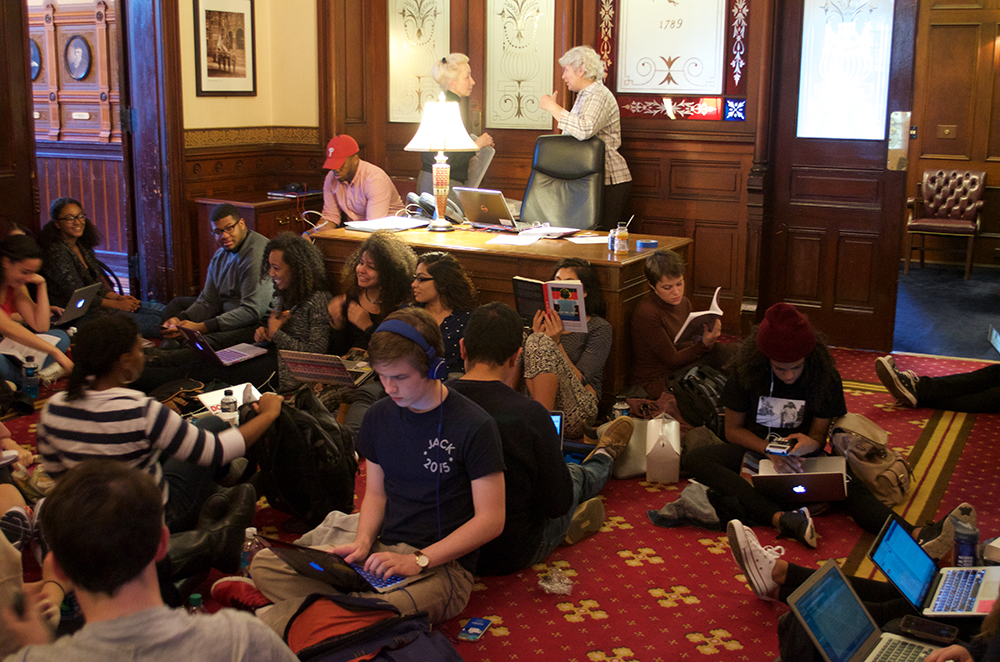 Students activists began staging a sit-in outside the office of University President John J. DeGioia today at 9 a.m. to pressure the administration into meeting a series of demands that address racial injustice at Georgetown.

As of press time, around 30 students remain seated outside DeGioia’s office on the second floor of Healy Hall. The activists will continue the sit-in until 12 a.m., and expect to stage daily sit-ins until administrators meet the demands, which include changing the names of Mulledy Hall and McSherry Hall, revising university tours to include information on the history of campus sites, placing plaques on the known unmarked graves of slaves and establishing an annual program focused on education.

DeGioia interacted with the protesters briefly in the morning, and the Working Group on Slavery, Memory and Reconciliation held a meeting at 12:30 p.m. At around 7 p.m. students from American University joined Georgetown students outside DeGioia’s office.

The retention of Mulledy Hall’s name sparked ire earlier this semester and drew attention to former University President Fr. Thomas Mulledy, S.J., who authorized the sale of 272 slaves to a Louisiana plantation in 1838. McSherry is named after former University President Fr. William McSherry, S.J., who served as Mulledy’s lawyer during the sale. Student activists are using the hashtag #BuiltOn272 — the number of slaves sold — on Twitter.

.@GeorgetownUniv tried to bury us with unmarked graves. They didn't know we were seeds. #GU272 #BuiltOn272

Other demands include creating an endowment for recruiting black professors — equivalent to the net present value of the profit from the 1838 sale — and mandatory training for professors on diversity and identity issues.

At the sit-in, students expressed their frustration with the university administration.

Alejandra Baez (SFS ’16) said the ongoing struggle is important to the black community at Georgetown.

“The black student struggle is my struggle because this community, if we’re not in it to support each other, is not a community. That’s just the opposite of what a community means,” Baez said.

“Personally, I think that naming a building after someone who sold slaves to build up the institution is a disgrace,” Baez said. “How can we build a legacy on an institution that disprivileged a huge portion of our country’s people and that continues to disprivilege students at Georgetown, just in the aftermath of it?”

According to Latazia Carter (COL ’17), a student participating in the sit-in, the movement began before the student demonstrations at Mizzou.

“As a black student at Georgetown, we frequently deal with micro-aggressions everyday. This discussion didn’t just start with Mizzou. … This has been an issue that we’ve been dealing with because, as black students, we don’t feel comfortable with the name of that building,” Carter said.

Carter said she hopes the administration will recognize the community’s demands through the sit-in.

“I don’t want this to seem like a new movement because it’s not. But we’ve had to take this action because the university fails to hear us, and recognize our thoughts on the matter,” Carter said.