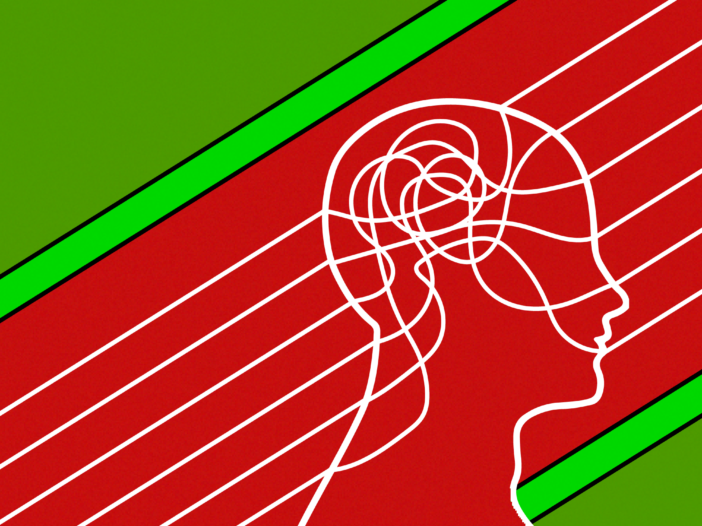 One night in January 2021, Chelsea Smith (COL ’21) was scrolling through Instagram in her childhood bedroom when one particular post began to tie her stomach in knots. The former Georgetown University track and field sprinter clicked on it, leading her to the latest highlight videos of National Collegiate Athletic Association (NCAA) track athletes competing in her event — the 400-meter sprint — during a masked 2021 indoor season. Athletes at other schools were practicing and competing, but Smith was stuck at home, and the thought of falling behind them stressed her out.

Smith felt the signs of an impending anxiety attack, so she quickly turned on the song “Overnight Celebrity” by Twista, a strategy that Georgetown sports psychologist Erica Force had previously suggested to help manage Smith’s stress.

“I don’t know what that song does to me. I just like it so much,” Smith said in a Zoom interview with The Hoya. “You just need something that just has nothing to do with what’s going on, and just upbeat vibes — positive energy.”

During much of 2020 and the beginning of 2021, Smith was at home because of the COVID-19 pandemic, training alone as she watched track and field teams at other schools return to practice and competitions. Only in spring 2021 did Smith and other Georgetown athletes return to the Hilltop to resume training as a team.

“I thought about generally just stopping and just never returning to the sport because it was so stressful,” Smith said. “Once we had that first practice with everyone, I did a complete 180 — I was just like, ‘Okay, I’m actually going to stick to it, and I’m going to run this season.’”

Unlike other schools, most of Georgetown’s student athletes did not begin to return to campus until January 2021.

Georgetown soccer player Pranav Jha (MSB ’24) said that as he spent his first year online, he felt envious of athletes who were able to return to their athletic programs, and seeing them on social media made it even harder.

“I would see pictures of that,” Jha said in a Zoom interview with The Hoya. “It was a tough pill to swallow at times.”

Mental health concerns among student athletes during the peak of the pandemic were 150% to 250% higher than historically reported by NCAA student athletes, according to an April 2020 COVID-19 well-being survey produced by the NCAA.

For some athletes, such as football player Colby Moss (COL ’24), the pandemic was the first time they had ever taken such a long break from their sport in their life, forcing them to grapple with questions of identity and who they were beyond athletes.

“I definitely went through an identity crisis for sure, because all my life just revolved around football,” Moss said in a Zoom interview with The Hoya. “I’m just trying to find who I am.”

Over the past year, professional athletes like tennis player Naomi Osaka and gymnast Simone Biles both publicly prioritized their mental health over their athletic performance as they withdrew from competitions. The onset of the pandemic disrupted sports worldwide, and athletes’ mental health has become a national conversation even beyond the college arena.

Getting in Mental Shape

Georgetown’s Counseling and Psychiatric Service (CAPS) worked with Georgetown Athletics to help student athletes adapt to the new reality of isolation and the virtual environment by encouraging student athletes to schedule teletherapy appointments with Force, the school’s only sports psychologist.

After working with Force, Smith learned techniques for managing sports-induced anxiety — as well as general stress in her life. She now regularly journals her thoughts, practices yoga and engages in deep-breathing exercises when stressed.

“She kind of brought me back down to reality in a sense,” Smith said.

However, as the only mental health professional working with Georgetown Athletics, 29 Division I and varsity teams share her time.

“I want all of our coaches and teams and student athletes to have the services that they want,” Force said in a Zoom interview with The Hoya. “We’ve got over 700-something student athletes, so we need more help.”

Talking about mental health with Force helped the football team lay the groundwork for destigmatizing conversations about the topic, according to Moss.

“Your heart is opening up to somebody you don’t know and in such a big setting — so at first it was kind of hard for people to adjust,” Moss said. “She didn’t force us to just jump in there. We built to that point, just talking about all the little stuff first.”

Football Head Coach Rob Sgarlata (COL ’94, GRD ’12) was also a proactive advocate of mental health and would constantly check in with his players, according to Moss. After Moss lost two family members and a close friend over the span of three months in early 2020, Sgarlata personally flew to check in with Moss, and he is now the first person Moss says he will call for guidance.

“It just showed me I meant more to him than just being a football player,” Moss said. “It showed me that he cared for me as a person, and he wanted to really help me and be there for me. That meant the world to me.”

Georgetown’s investment in mental health resources has significantly improved the culture of campus athletics by normalizing conversations about mental health, according to Shawn Hendi, Georgetown’s associate athletic director for student-athlete health and wellness.

“It has been refreshing to see how these initiatives have resonated across the department and are now woven into the fabric of our culture,” Hendi wrote in an email to The Hoya. “We have witnessed an opening of people’s minds and hearts to accept that sometimes it is ok not to be ok and that we have resources available to help navigate through those times.”

Linnea Saltz (GRD ’21), a former Georgetown track and field middle-distance runner, agreed the university’s services are helpful, but after her experience away from Georgetown during the pandemic, she said the department should more proactively address mental health concerns.

“If there was more attention drawn to the fact that mental health is as important as physical health, then I think a lot more people would utilize these things that we have,” Saltz said in a Zoom interview with The Hoya. “It’s just one of those things that’s like, ‘The option is there, and use it if you want.’ But then that’s it.”

Without abundant university mental health resources for teams, some student athletes found their own ways to manage isolation. Smith organized monthly Zoom meetings to provide track and field athletes with a space to share their feelings. The first call lasted for hours, she said.

In subsequent meetings, teammates shared their candid struggles with their mental health along with different resources they had used, like self-affirmation and mindfulness practices, according to Smith.

At the end of January 2021, Georgetown allowed athletes from select sports to return to campus to train. While adjusting to in-person life again, some athletes noticed the benefits of what they had learned about mental health while away from campus.

Upon returning to Georgetown, anxieties about falling behind also eased for some athletes. Past concerns, stemming from watching other athletes return to normalcy before Georgetown athletes, were not even a second thought for her, according to Smith.

“All of my stress — I kind of just threw it to the back of my mind,” Smith said. “Even though you know that other students were still — or, at least, you felt like they were ahead of you — it was just like it didn’t matter at the time.”

Even as the return to normal practices allays athletes’ stress, the athletics department plans to commit to athletes’ mental health by hiring a second full-time mental health professional to serve alongside Force, according to Hendi.

Along with student athletes, other members of Georgetown’s student body faced mental health challenges during the pandemic. While CAPS offered additional mental health resources for students throughout COVID-19, many students said they did not feel sufficiently supported.

Since returning to campus, the university continues to encourage students to seek out campus resources that best support their needs using the Every Hoya Cares resource center, according to a university spokesperson.

“We are committed to supporting Georgetown’s students as they live meaningful lives, confident in their mental health and wellbeing,” the university spokesperson wrote in an email to The Hoya. “These resources ensure students have 24/7 access to counseling services at no cost to them.”

Force hopes athletes can share the lessons they have learned about mental health during the pandemic with the broader student body. The athletics department has programming planned for the next few months dedicated to mental health awareness, including during the national Mental Health Awareness Week beginning Oct. 3, according to Force.

For Moss, learning about mental health during quarantine has already meaningfully impacted his team since returning to campus. Back in the locker room following a particularly difficult practice, a couple teammates noticed Moss’ subdued demeanor and asked how he was doing, according to Moss.