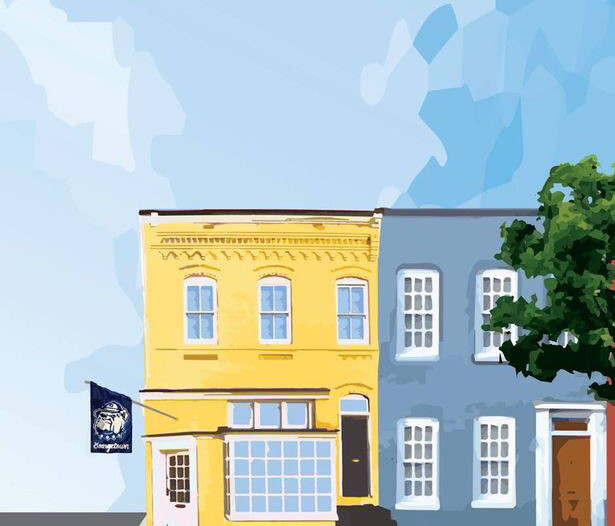 When Nolan Peacock (COL ’21) and his two housemates received a non-COVID-19-related noise complaint from the Student Neighborhood Assistance Program for hosting three guests at their off-campus house on Potomac and N Streets on Aug. 28, the last thing they expected was to receive a semester-long guest ban, a COVID-19-level sanction that bars them from inviting any guests to their house.

SNAP did not charge Peacock and his housemates with a COVID-19 violation, as all three guests were wearing masks. The noise complaint was their first conduct violation, according to Peacock.

“Our conduct officer told us that because we had admitted that we did it, he was largely going to stick to the sentencing guidelines that are established in the code of conduct,” Peacock said in an interview with The Hoya. “When we actually got our letter handed down, it was much worse. We got a guest ban: No guests of any kind until the end of the semester, until Dec. 31.”

The suggested sanctions for first-time non-COVID-19-related conduct violations are the same as in previous semesters and include Disciplinary Probation I, an official warning status indicating that any further misconduct within a specified period of time may result in suspension, and a six-week party ban, according to the Code of Student Conduct. All sanctions are decided by the Office of Student Conduct.

Although Peacock and his housemates did receive Disciplinary Probation I, the additional guest ban is a suggested sanction for COVID-19 conduct violations, according to the COVID-19 Related Student Conduct Policies, Sanctions, and Adjudication Processes. These violations include hosting or attending a gathering of more than 10 people on or around campus, failing to adhere to university or Washington, D.C. COVID-19 health and testing standards and failing to wear a mask in the presence of non-housemates.

Peacock and his housemates are not the only students who have had such an experience with SNAP and the OSC this semester. In several cases, students charged with non-COVID-19-related violations, oftentimes their first offense, have received COVID-19-level sanctions. While SNAP does play an important role in ensuring all students are following proper health protocols, the punishments for first-time infractions are unnecessarily harsh, according to Peacock.

“I really don’t have a problem with a neighborhood service coming around and saying, ‘Hey, you’re too loud, need to shut down the party.’ That’s fine. That’s understandable,” Peacock said. “The problem is the hugely outsized penalties that Georgetown throws against you for your first SNAP violation.”

SNAP’s role has remained the same this semester as in past semesters. As a neighborhood patrol service coordinated by the Office of Neighborhood Life, it responds to noise complaints and other concerns from Georgetown community residents, including students living off campus. However, the punishments for student misconduct delegated by the OSC are much more severe than in past semesters because of concerns surrounding the spread of COVID-19.

Furthermore, under the new COVID-19 regulations, there is no longer an appeals process for any disciplinary sanctions except suspension. Normally, students are allowed to submit a Statement of Appeal on one or more of three grounds: they believe the university has made a substantial procedural error that prevented a fair hearing, they have found new information of a substantive nature or they believe the sanction is disproportionately severe to the nature of the offense.

After Sam Marguleas (MSB ’21) and his roommate received their second disciplinary infraction, a non-COVID-19-related noise complaint and guest ban violation, for hosting four guests at their Prospect Street house Oct. 16, the OSC informed them that they would be suspended. After some pleading, they were told they could instead choose to move out of their house for the rest of the semester. The OSC did not allow them to submit an appeal, according to Marguleas.

Judy Johnson, the director of the OSC, did not respond to a request for comment.

Marguleas also noted the inconsistency of some of OSC’s disciplinary actions. While Marguleas was out of town Sept. 12, his four housemates hosted six guests who were not wearing masks and were written up by SNAP for a COVID-19-related noise complaint. Despite the fact that Marguleas was not present at the time, he was placed on Disciplinary Probation I and a guest ban along with his housemates.

The OSC may choose to hold all residents of a house accountable for a conduct violation, according to the COVID-19 Related Student Conduct Policies, Sanctions, and Adjudication Processes. However, when Marguleas and his roommate received their second infraction, it did not apply to his three other housemates, who were not present when the four guests were there, according to Marguleas.

These changes in student conduct policy were outlined in the “Student Behavior and New COVID-19 Student Conduct Policies” announcement released by the OSC on Aug. 27. All students, including those living off-campus in non-Georgetown-affiliated housing, were required to sign a compact agreeing to adhere to the university health and safety procedures. The compact also guarantees students free coronavirus testing on campus.

These policy changes and increased sanctions for misconduct are meant to protect Georgetown students living on campus and in the surrounding neighborhoods, especially given the recent rise in cases among community members, according to a university spokesperson.

“We have been concerned about, and will continue to monitor some of the violations occurring with gathering size, as well as lack of mask usage and appropriate social distancing,” the university spokesperson wrote in an email to The Hoya. “We have adapted our policies due to the urgency of addressing public health risks associated with gatherings and non-usage of masks. These COVID-19 policies are in addition to existing policies, and violations result in serious sanctions.”

Students have also criticized the lack of clear communication between the OSC and students who have received write-ups from SNAP in recent months. Given the changes in conduct policy this semester, many of which are published on the OSC website but not directly sent to students, it can be difficult for students to understand the different sanctions and processes that come with an OSC violation.

After students are notified of their charges, they are given a short window to file a written statement and schedule a Zoom meeting with the OSC. While the OSC claims that these meetings provide students with an opportunity to defend themselves, the lack of appeals process for most sanctions this semester makes it difficult for students to know what to expect for these meetings, according to Maia Farrell (SFS ’22), who was called in for a meeting after failing to sign the community compact.

“They frame it as if it’s a way for you to defend yourself, but they end up doing what they wanted to charge you for,” Farrell said in an interview with The Hoya. “Every time you try to speak, they just talk over you. I wasn’t really given a chance to defend myself, so that really upset me.”

Max McCool (MSB ’22) was also required to attend a Zoom meeting with the OSC after receiving a noise complaint Aug. 30. Following the noise complaint, he was placed on a guest ban and Disciplinary Probation II, a disciplinary status that allows a student to remain at the university and avoid suspension provided that they adhere to certain conditions.

The meeting with Johnson and Assistant Director of Off-Campus Living Victor Lopez took place Sept. 3 and lasted over an hour, consisting mostly of questions regarding McCool’s account of the event that led to the noise complaint, according to McCool.

“I felt powerless. I already knew my minimum punishment, since there was no option to appeal,” McCool said in an interview with The Hoya. “I felt overall they were pretty disrespectful. They mentioned that they thought my word didn’t mean very much to them.”

Students are allowed to have a family member or a member of the Student Advocacy Office, a resource center that helps students navigate the university disciplinary system through free and confidential advising, sit in on their meetings with the OSC. However, the lack of an appeals process means there is little SAO members can do besides support the students undergoing these meetings, according to Grace Halliburton (MSB ’22), a member of SAO.

“Without appeals like we would usually help the students file, we are basically just there for moral support,” Halliburton said in an interview with The Hoya. “But going to so many meetings has helped us prepare students better for what to expect this semester.”

Although the university has said the increased sanctions for conduct violations are meant to protect the health and safety of the Georgetown community, many students have questioned the effectiveness of these measures in curbing the spread of the coronavirus.

Many of the charges that SNAP imposes on students are because of noise complaints from outdoor socialization, according to Grace Keegan (NHS ’21), who was put on Disciplinary Probation I after receiving a noise complaint for hosting five friends, all of whom were wearing masks, in her backyard for her birthday Sept. 4.

“They basically encouraged us to socialize indoors, which I was very frustrated with. I made sure my friends got COVID tests that week and made sure that we stayed outside with masks and social distancing,” Keegan said in an interview with The Hoya. “I think SNAP cracking down is encouraging less COVID-safe practices.”

In many noise complaint cases, the university seems to care about the concerns of neighboring residents more than its students, according to Peacock.

“Georgetown prioritizes the needs of its neighbors so much higher than the needs of students and doesn’t really care about the mental health, financial or personal impacts of any of their policies,” Peacock said.

“I keep getting emails from my dean about mental health, how important that is right now, and this is an unprecedented time,” Marguleas said. “No matter how much we tried to appeal to the disciplinary board and say, ‘Empathize with us. It’s been a very tough year. Look, you’re gonna change our lives forever.’ They’re like, ‘Sorry, you broke the rules. No wiggle room.’”

Keegan was told by her dean that she would have to report her conduct violation to the medical schools she was applying to, further adding to her stress and anxiety.

“I got an email from my dean that I had to email all my med schools and directly communicate with them about this,” Keegan said. “I had a few really, really bad days.”

Peacock noted the bleak and tense environment in his house following their noise complaint infractions and their fear of receiving another that could potentially lead to their suspension.

“We can’t speak, we can’t play music, we can’t shout across the apartment to get someone’s attention, we wouldn’t watch movies, we wouldn’t turn on the TV,” Peacock said. “We were worried about unloading the dishwasher because we didn’t want to create noise with the plates clacking against each other.”