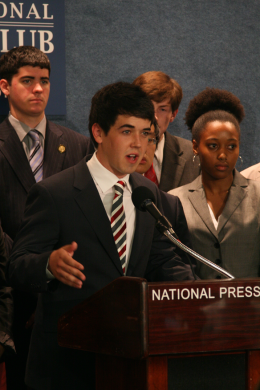 Georgetown University Student Association President Mike Meaney (SFS ’12) looked slightly nervous as he stepped up to the microphone. Midway through his speech, he admitted that he did not particularly enjoy public speaking. But that did not deter him from making an impassioned plea to congressional leaders to reach a deal on the debt ceiling.

“Right now, Washington is failing us and our future hangs in the balance,” Meaney said. “We are not here to tell our leaders what to do. We are simply here to tell them to lead.”

As Congress remains stalled in political gridlock, over 110 student body presidents representing 2 million students have signed on to a campaign spearheaded byMeaney that urges leaders in Washington to reach a deal on the debt ceiling.

Signatories from over 40 states have put their name to a letter drafted by Meaney along with former GUSAFinance and Appropriations Chair Nick Troiano (COL ’12) and other student body leaders.

The initiative was formally presented by 11 leading student body presidents at a press conference at the National Press Club Thursday. A number of national media outlets were among the crowd of about 30 people who listened to the student body presidents present the effort, which asks congress to swiftly resolve the debt crisis.

The ‘do we have a deal yet?’ initiative implores politicians to put aside their ideological differences and reach an agreement for the sake of the youth generation. The group has written a letter to President Obama, Speaker of the House John Boehnor (R-Ohio), House Minority Leader Nancy Pelosi (D-Calif.), Senate Majority Leader Harry Reid (D-Nev.), House Majority Leader Eric Cantor (R-Va.) and Senate Minority Leader Mitch McConnell (R-Ky.) asking them to negotiate a deal sooner rather than later. The letter was read aloud at the conference by some of the signers in attendance.

“This is about our future, our education, our jobs, our families, our dreams, our country. But all we can do about it right now is to rely on your leadership. We ask you find the courage to lead. It is why you are there,” the letter states.

Meaney pointed to the gang of six’s bipartisan effort as a possible solution.

“Anyone who has followed the rhetoric in this debate knows that both sides talk about ‘the next generation’ and what they have to lose. Well? We’re them,” he said. “We can’t afford to stake our economic future on a political squabble over the debt ceiling. We can’t pass up an opportunity to solve our problems because of pledges, partisanship, or pettiness.”

The movement began a week ago after Meaney, Troiano and Carlos Reyes (SFS ’11), a former community member on The Hoya’s board of directors, decided that there was a stark lack of a youth voice in the debate over raising the debt ceiling that has crippled Washington in an intense partisan gridlock.

“There’s never been a more important time to care about what’s going on,” Meaney said in an interview with The Hoya.

At press time, Republicans and Democrats have yet to reach a compromise as the deadline of Aug. 2 creeps closer. Without a deal to raise the debt ceiling above $14.3 trillion in under two weeks, U.S. Treasury officials have said the United States will begin to default on its obligations.