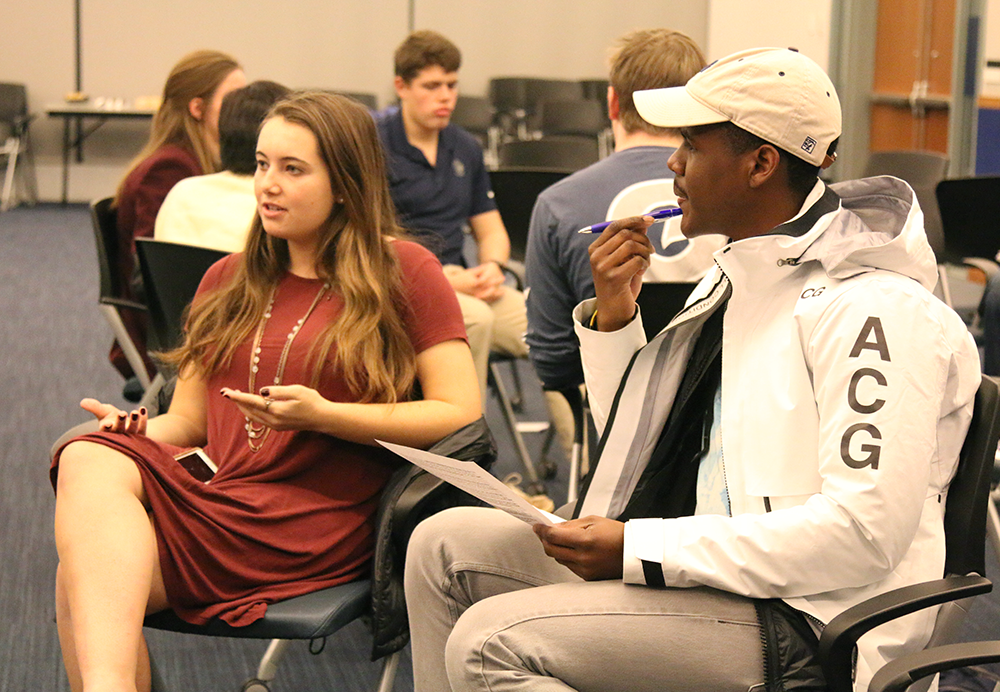 The problem of exclusivity of Georgetown clubs is the product of a competitive application process motivated by a quest for social capital, said Ricardo Mondolfi (SFS ’19), chair of the Student Activities Commission, at an open forum on club culture last Thursday.

The open forum was hosted by an informal group of student leaders working to address issues of club exclusivity on campus. The group, convened by Assistant Dean for Student Engagement Erika Cohen Derr last spring, is an early effort to develop an understanding of the university’s club-centered social scene and find solutions to resolve the impacts of club exclusivity.

Cohen Derr said she convened the unofficial and informal group in spring as “more of a focus group” to discuss matters related to club exclusivity.
It met at least twice this fall to organize last week’s forum and a closed summit of student leaders two weeks earlier, which sought to bring more perspectives into the effort. The group now plans to form focus groups to receive more feedback from first-year students.

Mondolfi said the campus social scene’s orientation around large clubs, some of which have low acceptance rates, creates a perception that clubs form a social hierarchy.

“There is a generalized perception that a few student organizations provide social capital, welfare and happiness and friendships and connections,” Mondolfi said.

This conflation of social capital and clubs is the root of the problematic campus culture, according to Goldstein and Mondolfi.

GUASFCU, Blue and Gray and The Corp form what Goldstein calls “the trifecta” — in his opinion, those seen, perhaps unfairly, as the large clubs most emblematic of the exclusivity problem in the eyes of the student body.

All three clubs declined to release their acceptance rates this year in response to requests from The Hoya.

Goldstein, a member of Blue and Gray, said the three groups collectively decided not to release the rates during a meeting of the informal working group this fall. Goldstein said that the acceptance rates are “not helpful in this discourse,” because focusing on only three groups oversimplifies the problem of exclusivity.

Goldstein also said coverage of the three groups creates a perception of the clubs that “furthers the problem that it makes them seem even more appealing to people.”

The efforts by the working group have been disorganized at times this semester, according to Goldstein. Goldstein and Mondolfi are seeking to create an official university working group that would include students and potentially launch this spring to address the problem over several years.

“I would love to see a working group that is open membership but also is effective enough in such a way that has positions,” Goldstein said. “Conversations need to start on the student level, and follow-up needs to happen on the administrative level.”

Cohen Derr said she is not sure whether the issue of club culture merits an official university working group, but that she will “work with those interested in the conversation to give it the structure and level of formality it needs to work towards the overall goals.”

Clubs such as the Lecture Fund, Japan Network and the Black Student Alliance have adopted open-body rather than hierarchical structures to create a more inclusive environment. Lecture Fund Chair Aiden Johnson (COL ’19) said opening membership to any student has benefited the club.

“Not only is being more inclusive the right thing to do from a moral standpoint, but it also enables us to do our job more effectively as a group that tries to bring speakers that are relevant to our student body,” Johnson said.

However, even if more clubs switched to a more open model, Goldstein said the problem will persist because the underlying cultural issues would remain.

“Even though a lot of groups can accept more people, that will not solve the problem that freshmen at Georgetown are lonely and sad their freshman year because there is such a social hierarchy around clubs,” Goldstein said.

Goldstein said to combat this system of perceived social hierarchy, there needs to be new ways to interact socially beyond clubs, such as more frequent or more meaningful events with freshman floors, mandatory first-year seminars with the same small group of people every week of the first semester or open events in the first few weeks where people can meet.

“The goal [is] to create a system of social capital that is fundamentally inclusive and accessible,” Goldstein said.

Mondolfi said identifying the club culture as the problem was the easy part of the task, but determining the next steps proves more of a challenge.

“Once you understand that [Georgetown’s culture] is the problem you almost freeze. How do you change culture?” Mondolfi said.