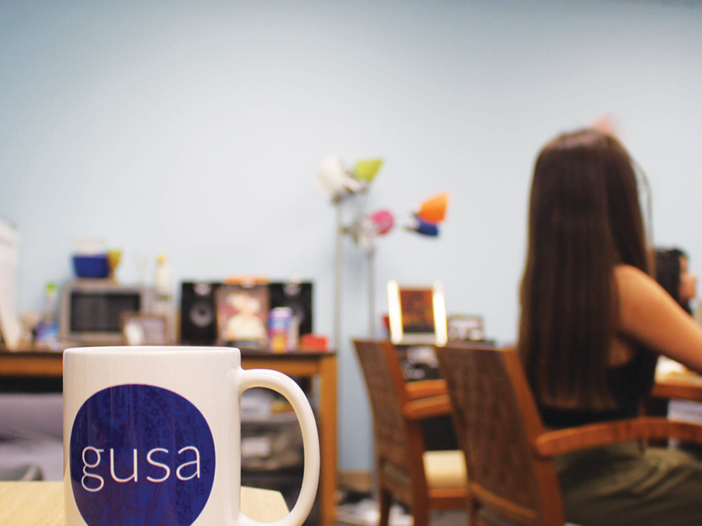 The Georgetown University Student Association (GUSA) senate unanimously passed a resolution to create a working group for a statistical agency to conduct surveys and a semesterly census on the student population to gauge student opinion on issues.

During the April 10 meeting, the GUSA senate voted to create the Student Advocacy Statistical Agency, which would be funded by GUSA. The agency would conduct surveys to determine student opinions on different issues. The agency would also have representatives from GUSA members, undergraduate academic councils and media board organizations.

One of the purposes of creating the statistical agency was to allow people in GUSA to gain a better understanding of the needs of the student body, according to GUSA Senator Joshua Bernard-Pearl (SFS ’25), who was one of two senators to introduce the resolution.

“Occasionally people will reach out to us, but we don’t have a really good way of knowing scientifically, kind of what percentage of students care about this issue or that issue,” Bernard-Pearl said in an interview with The Hoya. “So in that sense, it’ll help us to know what the student body cares about.”

The agency will provide GUSA and other advocacy groups with the necessary information to bargain with the administration, according to GUSA Senate Speaker Leo Rassieur (COL ’22).

“For a long time, student leaders have struggled with communicating credible information about student wants and needs to the administration,” Rassieur wrote to The Hoya. “I believe this new agency will help GUSA and other advocate groups at Georgetown come to the negotiating table better equipped to make change.”

The creation of the agency will help a number of different student organizations, according to Bernard-Pearl.

“It’s something that’s meant to help a number of different agencies,” Bernard-Pearl said. “We recognize that there’s a need for data and statistics on students’ opinions, not just within GUSA, but also within other advocacy and information organizations.”

The statistical agency is in the process of launching next semester, according to GUSA Senator Dominic Gordon (SFS ’23), who worked with Bernard-Pearl to introduce the resolution.

“Obviously, we kind of are going through a trial run this year,” Gordon said in an interview with The Hoya. “So we’re going to get money from GUSA. The hope is that this would be a permanent thing added to the bylaws in the future, but preferably before the next budget summit.”

The new agency will also help students engage with GUSA, according to Rassieur.

“This new agency will help students express their views on a wide range of subjects far more frequently than they can right now, helping to bridge the disconnect that some feel exists between GUSA and the student body,” Rassieur wrote.

The agency will also act as a tool for different organizations to interact with the broader student body, according to Gordon.

“My hope is that it could broaden outreach amongst all the different student advocacy groups and give us better data,” Gordon said. “So when people decide to implement projects, they know which projects are going to be ones that students want and which ones the students don’t really care that much.”

While the agency was created by GUSA, its long-term goals involve becoming an independent entity, according to Bernard-Pearl.

“It was created kind of within the GUSA framework, but with the idea that it would branch out from GUSA,” Bernard-Pearl said. “The goal of the agency was not to be under necessarily the senate or the executive or to be a GUSA agency, but become more of an adjacent entity. The framework was used because forming an agency that way allows it to work in close partnership with GUSA and also have access to funds and resources and the kind of relationships that GUSA has with the administration.”

Although the agency is in its early stages, its proponents are confident that it will become a permanent fixture of student government, according to Gordon.

“I just think it’s a good idea. It’s a long time coming, and it’s not easiest to get things going. But, you know, it’s going to happen. We’re like the rock band that starts in the garage, but for stats,” Gordon said.